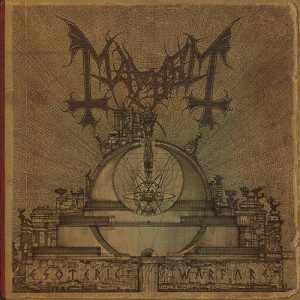 There’s a lot of interest coming around Mayhem the last year. Seven years have passed since their last record (‘ Ordo Ad Chao’) and a great number of interviews of the band around the band’s next milestone were conducted. ‘Esoteric Warfare’ gained publicity right before its release, with ‘Psywar’ to be given as the band’s first single. The song managed to be supported by a few fans, but the majority of them were a bit disappointed by the song, hoping for better to be included in the record. The band, which influenced the whole black metal scene with ‘De Mysteriis Dom Sathanas’, needs to impress the fans once more.

The band recorded ten new songs, trying to get closer to the old-school style of black metal which characterized the Scandinavia’s scene two decades ago, during the nineties. The sound is raw and primitive, with the vocals to underline the deep and satanic side of growls. Within ‘Esoteric Warfare’ there are plenty of aggressive moments as well as slower moments, without blasting drums and fast riffs. As an idea, as a concept, the record could have been something great and a come-back to the ‘Grand Declaration of War’ years.

However, the tracks themselves are not equal to the quality and perspective of the band back then. ‘Pandaemon’, ‘ Psywar’, ‘ Corpse of Care’ and ‘Aion Suntelia’ are the strongest songs of the disc, which is rather characterized with songs that just do not come up to the reputation of a band like Mayhem. ‘Trinity’ or ‘ Milab’ could have been great songs. Their hunting guitars justify the previous statement. However, their whole music ideas along with the preaching vocals just do not seem to bond together, creating a ‘melting’ result, something not as powerful as someone expects it to be.

Attila’s vocals are not as strong as they used to be, but the main problem is the dissonance in the music. In ‘V.I. Sec’, the vocals are either too low for the listener to really notice or too high-pitched, without any meaning to justify the choice of those vocal lines. Old-school sound is not the factor that makes a band ideal to raise again both into mainstream and underground black metal scene, because of the great number of the bands which produce great records in the specific music genre. The quality and innovation of the songs should be the factor Mayhem needed and after seven years of absence, the band should have found their path to follow, so as to create something influential and great.

Along with the new Satyricon, which was released the previous year, ‘Esoteric Warfare’ is a disappointing one for a black metal fan. Nevertheless, even if the first wave of black metal releases disappointing records, the underground seems to provide us the ‘darkness’ we seek in our music, in a music genre which is known for its excellent releases in the last years. Coordinate your attention to the less famous black metal bands and you shall be rewarded!