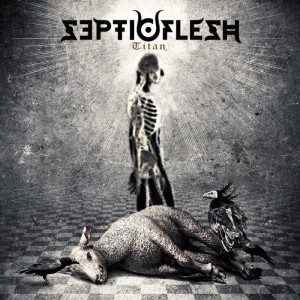 SepticFlesh are a symphonic death metal band, founded in Athens, in 1990. They were formed by Sotiris Vayenas (guitar), Spiros Antoniou(vocals, bass) and Christos Antoniou (guitars). They have a great reputation especially to those who love the specific kind of music. Their character is very special. They combine harsh and clean vocals with the orchestral and extreme metal sound. The result, most of the times, is very powerful and atmospheric.

The new album is called “Titan” and was released on 20th of June by Season of Mist. It is an album that everybody was waiting patiently. You see, we were looking after to listen to something new, fresh and different from what was presented to “The Great Mass”, which was a very good album, very similar in some parts to “Communion”, though.

To begin with, “Titan” was not as promising as many of us expected. The disc begins with “War in Heaven”. The track was interesting and a quite good choice for opening. Second is “Burn”, which literally made me get bored. There wasn’t anything interesting in the lyrics, which were repetitive. “ Burn, burn, burn” and at the end a solo with no meaning. “Order of Dracul” was the first song I listened to from the album, and I confess that it gave me-unluckily- the hope that maybe the new album is something completely different. Powerful character, nicely worked vocals and symphonic parts. Another song that I liked was “Prototype”. It belongs to that kind of songs that makes you want to listen to them again and again. After that, comes “Dogma” another good song. After those songs I have to say that I got tired of the rest of the album. The next 5 songs seemed to me almost the same. Even the homonymous song, “Titan”. Excessive use of chorus is noticed. The symphonic parts are well written and performed.

The general problem, in my opinion is that has been given more attention to those parts that to lyrics or to melody’s changes. If the album was criticized only for its orchestral and choral parts, I’m sure that the note would be very good. Everyone that loves listening for years to Septic Flesh knows that this is one of the things that can do very good. It’s sad to realize that in some point they got tired or they do not have new ideas and material. And I don’t blame them, because it’s very difficult to have a balance to this genre of music.

“Prometheus” has a beautiful guitar and orchestral opening. The song gives you the sense of glory and majesty of the fallen Titan. You could wait for an amazing solo, for example after the chorus, which could complete the concept. Sadly this is missing from the majority of the songs. Guitar is a bit wick and sometimes lost beside the pompous orchestra, in contrast to older albums, such as “Communion” or “Ophidian Wheel”. ‘’Confessions of a Serial Killer” left me unmoved, same as “Ground Zero” did. Last one on the list is “The First Immortal”. As I might have said before…nothing new. Just a song which after the listening of the album you want remember for its melody nor for its lyrics.

SepticFlesh is a band with a big reputation all over the world. For many years since they got together the created many exceptional albums. So it’s justified the fact that anyone of us who keeps following them wants a good album. Something to get excited with and to remember after the first listening. I hope the next one will be better.