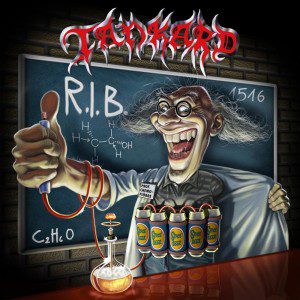 Aaaaah one of those nights again, those nights when one beer follows the other and one incident follows the other and then you wake up the next day, not having the slightest idea what happened. Whatever happened included you, a Latina prostitute, a llama, a chicken and a Russian firebreather. For those insane moments in every man’s life there’s Tankard! Those Frankfurt Thrashers who don’t deserve to live in the shadow of the big Teutonic 3 (Kreator, Sodom, Destruction) since they deliver a beautiful feelgood Thrash metal assault to our ears especially with records like the acclaimed “Chemical Invasion”, “The Morning After”, “Zombie Attack” etc. Consistency and honesty are the accurate words for this band, like a bunch of drunken Germans sharing those beautiful “morning after” stories over a cup of coffee.

Their new album is called “R.I.B.” (Rest In Beer, what did you expect from a German band called Tankard?), and it kicks in kinda mellow with a lead over sinister sounding melodies, which turn into an old school Thrasher called “War Cry“, ripping fast and a great chorus as well as solo, showing the bands’ in a really good mood. “Fooled By Your Guts” keeps up the speed made for moshpits and lyricwise deals with trademark Tankard stuff, about a scientist using a patients’ guts to store beer. One of the best songs on the record and the first one to leak from the new album. The title track is the first video of the album and with the exception of some groovy headbanging parts and the doomy intro, is another beer drinking anthem including a kick ass chorus. Also you gotta love the monk chanting imitation in the middle somewhere.

“Riders Of The Doom” comes with headbanging midtempo riffage and great leads, made for slower mosh pits or stage dives. Coming up next we have “Hope Can’t Die“, maybe the most serious song lyricwise on the record, musicwise a midtempo track to headbang to. A statement follows in “No One Hit Wonder” a fast song, an ironic song about them not being a big media two-month-flash. Thank fuckin beer they’re not! “Breakfast For Champions” one more fast ripping song, with a great chorus meant to be sang outloud. The speed continues with “Enemy Of Order” slightly more melodic riffage, yet always in the relentless Teutonic Thrash spirit. “Clockwise To Deadline” and “The Party Ain’t Over Til We Say So” is the duo that ends the record: the first one another fast song for everyday struggles and deadlines at work and as for the second one I don’t think it needs any further description, just the adorable Frankfurters meant to make you go nuts with their music.

Tankard did what they do best: deliver amazing music without taking themselves too seriously, giving us moments of laughter when we need them the most. Great times, smiles of joy, crazy moments, it’s Tankard sharing their best stories with us, and motivating us to make our own by raising our tankards and devouring our Bratwursts. PROST!