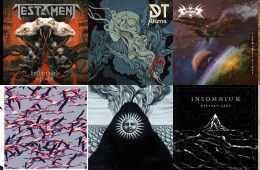 Panagiotis KaragiannidisJanuary 16, 2017
Here we are once again; In the end of another year and our annual tribute to the best 20 albums of the year...
033 min read 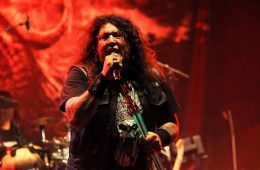 CHUCK BILLY On Upcoming Album: ‘There’s More Blast Beats Going On All Over The Place’ 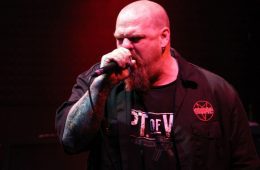 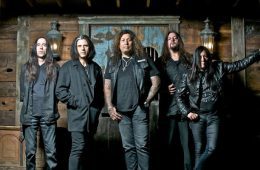 TESTAMENT’s CHUCK BILLY To Guest On New THE HAUNTED Album

Manos SpanosMay 21, 2014
TESTAMENT singer Chuck Billy will make a guest appearance on the new album from Swedish metallers THE HAUNTED, due later in the year via Century Media Records. The song, tentatively titled "Trendkiller", has been described by producer Juan Urteaga, who recorded Billy's vocal tracks, as "sick as heck!" THE HAUNTED's new CD is being recorded at Antfarm studio in Åbyhøj, Arhus, Denmark with producer Tue Madsen. The band released a new three-song single, "Eye Of The Storm", on January 20 in Europe and January 21 in North America via Century Media Records. "Eye Of The Storm" was made available as limited-edition seven-inch EP (1,000 copies split as follows: 500 on black vinyl, 300 on red vinyl and 200 on white vinyl) and as digital single, featuring the new songs "Eye Of The Storm", "Infiltrator" and "My Enemy". "Eye Of The Storm" track listing: 01. Eye Of The Storm 02. Infiltrator 03. My Enemy The single marked the recording debut of THE HAUNTED's new lineup, which was announced last summer, featuring founding members Patrik Jensen (guitar) and Jonas Björler (bass), returning members Marco Aro (vocals) and Adrian Erlandsson (drums), as well as new guitarist Ola Englund. THE HAUNTED's 2014 lineup: * Patrik Jensen - Guitar * Ola Englund (SIX FEET UNDER, FEARED) - Guitar * Marco Aro (THE RESISTANCE, FACE DOWN) - Vocals * Jonas Björler - Bass * Adrian Erlandsson (AT THE GATES, PARADISE LOST) - Drums Vocalist Marco Aro (ex-FACE DOWN, also in THE RESISTANCE) was previously involved with THE HAUNTED for three acclaimed releases between 1999 and 2003 as well as for several worldwide touring campaigns. Drummer Adrian Erlandsson (also in AT THE GATES and PARADISE LOST) belonged to the original lineup of THE HAUNTED together the Björler twins after the demise of their previous legendary group, AT THE GATES. Together with Jensen, they launched THE HAUNTED's self-titled debut in 1998, an album which has been widely considered as the kick-start for a new era in the thrash metal movement and which, despite its initial underground status, climbed to be a massively inspirational record for a whole new generation of musicians and bands in the following decade. Guitarist Ola Englund is a highly talented young player from Sweden, who has recently been active as touring and recording member of U.S. death metal institution SIX FEET UNDER.
03 min read

Manos SpanosDecember 16, 2013
David E. Gehlke of DeadRhetoric.com recently conducted an interview with SEPULTURA guitarist Andreas Kisser. A few excerpts from the chat follow below. DeadRhetoric.com: Since you're working with Ross [Robinson] again, it makes one think of the first time you recorded with him, which is when down-tuning became really big with bands like KORN and the DEFTONES doing it. Max [Cavalera] was always a big proponent of it; were you as well? Kisser: At the beginning, not much. I was skeptical of the low tuning because bands like KORN or the DEFTONES, they don't have the fast pace of SEPULTURA's music. I was concerned to lose that kind of fast ability and the picking, the heavy picking on sloppy, low strings. But there are so many possibilities of using heavier-gauge strings, which give that kind of tension, and you don't lose that ability to play fast. "Trauma Of War", the song that opens the [new SEPULTURA] album, it's in low tuning, but it's a very fast song, but we don't lose that kind of ability. I learned how to do deal with that, and you open a lot of worlds in music, but yeah, at the beginning I was a little skeptical. DeadRhetoric.com: Your very first meeting with Derrick, what do you remember the most about it? Kisser: It was great. He came down from the States to Brazil because we were holding auditions with different people in Brazil. Derrick came down after the demo and he did "Choke". I have "Choke" with so many different singers [including Marc Grewe of MORGOTH; Phil Demmel of MACHINE HEAD and VIO-LENCE; Jason "Gong" Jones of DROWNING POOL; and Jorge Rosado of MERAUDER) some day I'll release it with all the different versions. Even Chuck Billy from TESTAMENT, he did a tryout. It was interesting the way he sang "Choke" and stuff. It would be cool to put it out some day. Derrick was for the future, though. We weren't looking for somebody similar to Max, or trying to replace him with a clone. Different visuals different attitude we liked Derrick we felt he could really grow up and be into simple terms is it, which he did. His vocals are great, he's very diverse, he can do melodic stuff and aggressive shit, and he hardly loses his voice. He's very professional and he takes care of his voice on tour and everything. He's great. He's a guy who is also very intelligent. We talk a lot about different movies, documentaries, books, and we do lyrics together. We come up with song titles, concepts, and everything. He's a great partner in that respect. DeadRhetoric.com: Personality-wise with Derrick, did you guys connect fairly quickly? Kisser: I think it was different for him. He came to Brazil, replacing Max Cavalera, which was very hard in the beginning — being black as well in such a racist society everywhere in the world, not only in America. It's great that he was able to face all this with great courage and great professionalism. SEPULTURA as well, with somebody like him in the band, and we said what we always said, that we're for justice and equality, and respect. We live that; we not only say that for the lyrical purposes. We really are what we are. He was the best choice for us. He's a guy who could understand the SEPULTURA way of living, of hard touring everywhere and we can survive in a bus together without wanting to kill each other and stuff. [laughs] We have the same type of ideas and conversations. I think Derrick was the perfect guy for us, and it shows. DeadRhetoric.com: The big vocalist search in 1997 and '98, was your head spinning from all the submissions? Kisser: Oh yeah, definitely. Right after Max left at the end of '96, back in January and February of '97, me, Igor [Cavalera, drums], and Paulo [Xisto Pinto Jr., bass] got together and started writing new stuff. We didn't want to play any old stuff. We didn't want try people out on something like "Refuse/Resist". That would be too easy, so we wanted to see the new guy singing something he never heard before; we wanted to see his input and his ideas and his possibilities with the vocals. We took eight to nine months just as a trio. We had the idea of staying as a trio, me being the singer and I even took vocal classes and tried to do demos, but I sing like crap. [laughs] I was the first singer of SEPULTURA that received a "no." [laughs] DeadRhetoric.com: I've seen and heard you do backup vocals — you don't have a bad voice. Kisser: I can use my voice fairly well, I can scream, but to be a singer and to embrace it, it's much more than having a good voice. You have to embrace something different. I am a guitar player. I didn't want to lose my guitar playing time just to embrace something that I am not. I don't want to force the situation. The trio time was great — we didn't do any live shows or anything, but we were practicing and trying out stuff, putting our heads in place, without making any big decisions with the turmoil that was going on. We resolved everything with Max, we signed all the papers, he's out, he didn't want anything to do with SEPULTURA. He left, and we started looking for a new singer. Then when Derrick came at the beginning of '98, he moved out to Brazil, and we started our journey. You can read the entire interview at DeadRhetoric.com.
06 min read

TESTAMENT Singer: ‘We Get Inspired By New, Up-And-Coming Thrash-Style Bands’

Manos SpanosOctober 10, 2013
Brendan Crabb of Australia's Loud magazine recently conducted an interview with vocalist Chuck Billy of San Francisco Bay Area metallers TESTAMENT. A couple of excerpts from the chat follow below. Loud: The further your career progresses, the more beloved many of those staples become to the long-time fans. How difficult is it to compose new material that can sit alongside the usual suspects of your live sets, and become accepted? Chuck: Well, I think because we never really write the same record, so I think that it's not just more of the same thing. You don't know what you're going to get on a record from us. We're always writing and that tends to get better and better as writing goes. We've been fortunate to play a lot more festivals over the summer when we go to Europe, so it kind of sticks in the back of your mind, that it's nice that you wrote a song that has those hooks or melodies where the crowd can respond and participate. We have a couple of those on this record, we always seem to have a song that kind of has a sing-a-long or a sing back or answer back, and it's been working. [laughs] So we've kinda been sticking with that I guess. Loud: On the live front, there's the impending release of your new DVD. What can you tell us about that? Chuck: Well, there's about 19 songs on it, and we put songs from the beginning of our career all the way to where we are now. It's actually a really good representation of where the band is today. The last DVD was in '05, and that's when we had the reunion with the original lineup. They only really wanted to play some of the stuff that they recorded on, so it's kinda nice, here we are now playing more of the current stuff. We decided to capture it, and we're really proud of it because we put a lot of effort into this DVD. It sounds really good, and it looks really good as well. So I'm pretty pumped on it. There's some backstage stuff and interviews, a video on it and the making of the video. Some cool stuff on there. Loud: Is the DVD somewhat of a stopgap before you bunker down to write the next album? Chuck: Well, we start it in January. We're doing the LAMB OF GOD, KILLSWITCH ENGAGE and HUNTRESS tour, and after that, that's the last tour and the first of January we start writing. Then hopefully have a record out by summer. Loud: Where do you envision the next record heading then? Chuck: Not sure. I mean, Eric [Peterson, guitar], I kinda play off of what Eric, what the mood or what the riff is, you know? He kinda has the beginning; he starts it out and gets it going first. Then it just kinda develops from there. I don't know what style of vocals I'm going to be singing yet, until he gets those riffs on the demo.
03 min read 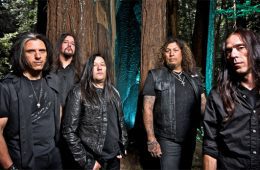 Panagiotis KaragiannidisJuly 21, 2012
Just a few days before the official release of Testament's new album "Dark Roots Of Earth", Metalpaths made a phone-call to the frontman of the band Chuck B...
00 min read