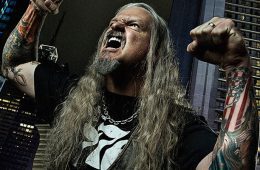 Manos SpanosJuly 12, 2014
ICED EARTH was recently forced to cancel a number of festival appearances and headlining shows this summer so that the band's guitarist and leader Jon Schaffer could undergo surgery to address continued pain from a neck injury he suffered nearly 20 years ago. In a new message on the band's Facebook page, Schaffer writes: "I'm writing to let you know that I made it through the surgery and am steadily on the road to recovery. "The surgeon informed us that everything went smooth during the operation and that I should be back in action within a few months. "Thank you all very much for your support, you truly are the best fans any band could ask for." Schaffer previously stated about his need to go back under the knife: "I underwent surgery on my neck in the year 2000, due to an onstage injury that occurred in 1996. Since that time, I have battled with this problem, and it has begun to accelerate in the past several months, causing additional issues that can no longer be ignored. "In February, while on tour in Europe, I underwent highly specialized treatment in Germany from a doctor who has helped, among many others, Tony Iommi and Eddie Van Halen. This treatment helped sustain my ability to perform so that we could complete our Worldwide Plagues Tour. However, I am now forced to take further, more invasive action sooner than I intended in order to maintain my overall health. "Surgery was originally planned to take place in September during our break, but I have now been advised to have the procedure completed sooner rather than later. "As much as it pains me and everyone else in our camp to have to cancel these dates, this is something that cannot be put aside any longer."
02 min read

Manos SpanosMay 21, 2014
On May 14, Groovey of Groovey.TV conducted an interview with ICED EARTH guitarist/mainman Jon Schaffer at Summit Music Hall in Denver, Colorado. You can now watch the chat below. Asked what he plans to do during ICED EARTH's break following the band's appearance at the Wacken Open Air festival in August, Schaffer said: "I have to have neck surgery. It's the second cervical fusion. I had the first one 14 years ago. And, ironically, we did Wacken, like, three and a half weeks after that, and I was in a neck brace and shit. But this time, there is no chance for me to do it and heal up through the summer because of what it takes. So, I mean, basically, early September, I'm going under the blade again and I'm gonna get this fixed. 'Cause it's rapidly gotten worse. I would say since the recording of [ICED EARTH's new album] 'Plagues Of Babylon' is when it really started to get bad. It's been bothering me for a long time, but now it's getting to the point where it's actually affecting my hands and my shoulders and it's really not good. A little break would be good, because it's not just the performing of ICED EARTH, it's the whole thing. It's a 24-7 job, so it's just gonna be good to be able to take a few weeks and not hear the words 'ICED EARTH' for awhile or anything and do some stuff with my daughter and have some good quality time. So that alone will recharge the batteries, let alone getting the neck situation fixed up." "Plagues Of Babylon" sold around 6,300 copies in the United States in its first week of release to land at position No. 49 on The Billboard 200 chart. The band's previous CD, "Dystopia", opened with around 6,100 units back in October 2011 to enter the chart at No. 67. ICED EARTH's 2008 effort, "The Crucible of Man (Something Wicked Part II)", registered a first-week tally of 6,700 to debut at No. 79. "Plagues Of Babylon" was recorded at Principal Studios (KREATOR, IN EXTREMO, GRAVE DIGGER) in Senden, Germany and was mixed at NHow Studios in Berlin, Germany. Guest vocals on "Highwayman" were laid down by VOLBEAT frontman Michael Poulsen and SYMPHONY X/ADRENALINE MOB singer Russell Allen. Guest vocals on "Plagues Of Babylon", "Among The Living Dead", "Democide", "Resistance" and "If I Could See You" are by BLIND GUARDIAN vocalist Hansi Kürsch. The cover and additional artwork was created by Eliran Kantor (TESTAMENT, ATHEIST, HATEBREED). Jon Dette (SLAYER, TESTAMENT, ANTHRAX) is sitting behind the drums for ICED EARTH's current tour, taking over for Raphael Saini, who filled in during the summer 2013 festivals, the recording of ICED EARTH's new album, and the club leg of the VOLBEAT 2013 tour. Dette made his live debut with ICED EARTH on November 6, 2013 at O2 World in Berlin, Germany. ICED EARTH last year parted ways with drummer Brent Smedley for "personal family reasons."
03 min read

ICED EARTH’s JON SCHAFFER: ‘I’ve Always Been The Leader Of This Band And Always Will Be’

Manos SpanosMarch 6, 2014
Metal Covenant recently conducted an interview with ICED EARTH guitarist/mainman Jon Schaffer. A couple of excerpts from the chat follow below. Metal Covenant: In my point of view, the new ICED EARTH album, "Plagues Of Babylon", has definite resemblances to your latest album, "Dystopia". Was this like a conscious choice from your side or did you just write an album in the ICED EARTH vein? Jon: Well, it's just an album in the ICED EARTH vein. I mean, the same approach was taken that we did to "Dystopia", so it's just another chapter. You know, it's what happens naturally; every record is. If you start doing something that's too contrived, then it becomes something that's not natural. Whether people get it or not, you know that's another issue, but we have to do what we're feeling at the time. Metal Covenant: The first half of the album is a concept story. What happened then, did you run out of fuel or inspiration? Jon: No, I just decided very early on that there's no reason to devote the entire album to this chapter of the "Something Wicked" story. I felt like we can tell it for five or six songs and we already had things like "Peacemaker" that wouldn't fit at all in the story, and I already had the music for "Cthulhu". It was different, you know. Different things were happening, and the decision to do "Spirit Of The Times" from SONS OF LIBERTY and to finally be able to do "Highwayman" with my brother singing on it, you know, that was like a big deal, so it didn't make sense to have a full concept album where "Highwayman" wouldn't have fit. It's very different, you know. It's kind of like an old RUSH record; that was the idea. Lke, "2112" was a concept on one side and on the other, it's individual tracks. Early on, that was decided. Metal Covenant: Do you ever reflect on what's published about your new albums — you know, reviews and stuff? Jon: I've seen some, but I don't really care. I really care more about what the fans say and I meet them and talk to them. What journalists say, I don't care. It really doesn't make any difference to me whatsoever, because it's like a lot of journalists, especially the guys that have been doing this a long time, they're so jaded and they hear so many new records. In the end, a lot of them don't even have a fresh, legitimate opinion as far as I'm concerned, so they don't really count, you know what I mean?! At the end of the day, it's the people who buy the music, who consume the music, who are the ones who pay the bills for me. Those are the fans, the people I care about. And as I said, you can tell from Facebook comments and from a lot of whatever's been put out on YouTube and stuff, the fan base is really happy. But journalists, why worry? I mean, it's really a waste of time. Metal Covenant: ICED EARTH is like your band, it's your kind of solo project and has been for a long time. What's the best about being in a situation where you can make all the calls? Jon: I don't really look at it that way. It's not a solo project, SONS OF LIBERTY is a solo project, you know. But I've always been the leader of this band and always will be. I mean, it's my vision and it has been since the mid-'80's. It's the thing I've been chasing all along. It's a battle, especially in the early days. The contractual conditions we were under were brutal and I don't think most people would have survived through
05 min read 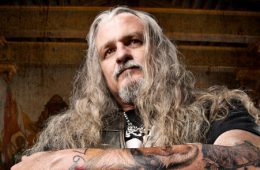 Panagiotis KaragiannidisDecember 26, 2011
After almost ten years, Iced Earth returned to Greece for their own headline shows. It's been too long and the two gigs on 2007 in Rockwave Festival and 200...
00 min read