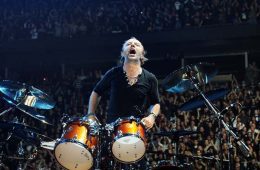 Manos SpanosOctober 31, 2013
METALLICA drummer Lars Ulrich has paid his respects to Lou Reed, the singer, songwriter and former THE VELVET UNDERGROUND frontman who died on Sunday (October 27) at the age of 71 from complications due to liver disease. Although Reed got a liver transplant last spring, the affliction could not be beaten despite continued treatment and Reed returned to Long Island to spend his final days at home. METALLICA collaborated with Reed in 2011 on the album "Lulu", which was a commercial failure and widely panned by fans and critics. Nevertheless, the disc was the last recorded work released by Reed, and the members ofMETALLICA may have been the last musicians to work with him in the studio. Speaking to Ben Beaumont-Thomas of The Guardian, Ulrich said: "[Reed and METALLICA] had communicated about a month ago when we were going to come by New York to play the Apollo, and Lou was going to come to the show and hang out. He didn't make it because his health took a turn for the worse, so I knew things were not good, but I didn't know it was that serious. So I was half shocked and half crushed — shocked that he went so quickly and crushed over the loss. "We were both outsiders, we both never felt comfortable going down the same path that everyone else was doing. METALLICA's always been autonomous, and Lou Reed is the godfather of being an outsider, being autonomous, marching to his own drum, making every project different from the previous one and never feeling like he had a responsibility to anybody other than himself. We shared kinship over that. And we brought him something that he didn't have, or maybe hadn't experienced so much, which in his own words were 'energy' and 'weight' and 'size' and whatever it is that happens when we start playing. He was so into what we brought him. And, of course, he brought us this incredible piece of work that he had already written, 'Lulu', and about her escapades and sexual endeavours. We brought something to each other, and we shared a common lack of ability to fit in with our surroundings. "The hard rock community, they can be pretty harsh, so I'm pretty thick-skinned. And so when the hard rock community turned its back on the record, I wasn't surprised. A lot of people were saying, 'Oh, Lou Reed doesn't sing.' Yeah, no shit. What do you think he's been doing for the last 40 years? Did you expect him to sound like Robert Plant? That's not what he does. In the hard rock community I was not particularly surprised. But I was surprised that some more intellectual writers were pretty harsh to it. "I'll always remember his fragility. I felt in some way that I connected to his fragility, and identified with it. He was very open, he would say, 'Lars, I love you,' and text me a heart. It was so beautiful. The way he was so unfiltered is what I will remember most, and his fragility, and how I've never met anybody who, no matter what he was saying, he was always speaking his truth. It never felt cerebral, it always felt like it came from some other place somewhere. When people talk, it comes from their brain; I don't know where his words came from, but they came from somewhere else. Emotional, physical, everything — it really resonated with me. I wanted to give him strength, and I think METALLICA gave him strength. His being was so beautiful once that guard went away, and it was childlike."
03 min read

Manos SpanosOctober 17, 2013
METALLICA drummer Lars Ulrich has revealed that there has been talk about his band touring with fellow rock giants U2 and GREEN DAY. In an interview with MTV News, Ulrich said: "U2 came to San Francisco two summers ago and we ended up having a lot to drink with them and GREEN DAY following a dinner. "I was told in the wee morning hours following this outing that members of U2, GREEN DAY andMETALLICA agreed to tour together. We haven't talked about it since, but speaking for myself, I'd be very up for that." In a 2010 interview with Australia's Faster Louder, Ulrich referred to himself as "the hugestU2 fan — I would borderline call myself a groupie, actually," he said. He added: "Playing withU2… I would fucking play on the parking lot. They're one of the only other bands that are still functioning after 30 years, just like we are, and I feel a lot of kinship in what they do and I just really admire and appreciate… They're really inspiring to me. I love their music, I love their way of reinventing themselves, and I love their way or thinking big and small. And it sort of works on all levels."
01 min read

Manos SpanosOctober 3, 2013
During a brand new interview with NME TV, METALLICA drummer Lars Ulrich was asked if he thinks the streaming service Spotify is the future of music. "I don't know if it's the only future; I don't see things that 'black and white' in my life," Ulrichreplied (see video below). "But certainly it's been a great experience. And I love Daniel Ek[Spotify CEO and founder]; he's just a great man. You can tell a lot about a company and the experience by the people; that's my belief. And Danny, he's a great man and he has a great soul. And I love Spotify. Now whether… we'll talk about this ten years from now, whether it's the future or not. I don't know if it's limited to a 'yes' or 'no,' but it certainly is working right now." Last December, METALLICA made all nine of its studio albums, as well as various live material, singles, remixes and collaborations, available on Spotify. The move was significant becauseSean Parker, who co-founded Napster, now sits on the board of Spotify. METALLICA waged a battle with Napster more than a decade ago over the illegal sharing of the band's music, which resulted in both legal action and a battered public image for the band. At the press conference in New York announcing the Spotify deal on December 6, 2012 Parkerand Ulrich appeared together and seemingly buried the hatchet. Ulrich said, "When [Parker] and I saw each other a few months ago. We could see that we had been put down as adversaries. We realize we had much more in common and sitting down was long overdue . . . We were younger, maybe somewhat more ignorant. We sat down and had a heart to heart." In a statement at its web site, METALLICA said, "We are extremely proud to be a part ofSpotify, who not only has a proven track record, but is by far the best streaming service." METALLICA is now able to make these deals directly since, as of last year, the band has complete control over the master tapes of all its audio and video recordings. The band has also launched its own label, Blackened
02 min read 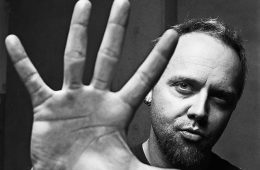 METALLICA’s ULRICH: ‘I Understand There Are People Waiting For A New Record, And So Are We’

Manos SpanosJune 22, 2013
METALLICA drummer Lars Ulrich tells RollingStone.com that the band has amassed nearly 600 song ideas during rehearsals in January and March of this year, many of which came from jam sessions the musicians held while on tour. "I understand there are people waiting for a new record, and so are we,"Ulrich says. "But I can't stress about it. It's not like, 'Fuck, hurry up and get this record out.' Hurry up for what? So we can go play gigs? We already play gigs. We'll get there." Although Ulrich and bassist Robert Trujillo have indicated in recent interviews that at least some writing for the upcoming METALLICA album had taken place, frontman James Hetfield has a different take. Hetfield told Abu Dhabi's That's Entertainment, "We haven't even started writing it. We're going through riffs. We have, like, 800-and-something riffs we're going through — lots of ideas. We're really excited about it, but doing concerts here and there, trying to get back in the studio and get some stuff done, it's all really exciting. But it gets done onMETALLICA time, which is not really scheduled. When it's done, it's done and when it's good, then it will be done."
02 min read

METALLICA’s LARS ULRICH: ‘Death Magnetic’ Will Be A Difficult Record To Follow

Manos SpanosApril 22, 2013
Saeed Saeed of The National conducted an interview with METALLICAdrummer Lars Ulrich prior to the band's return to Abu Dhabi, United Arab Emirates on April ...
06 min read