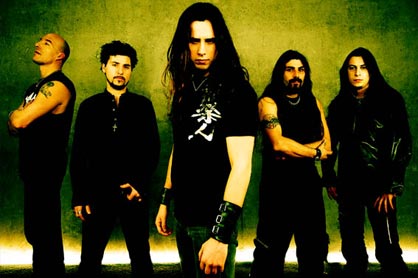 “World On Fire”, the new video from Greek melodic metallers FIREWIND, who feature in their ranks current OZZY OSBOURNE guitarist Gus G., can be viewed below. The clip was once again directed by Patric Ullaeus of Revolver Film Company, who has previously worked with DIMMU BORGIR, LACUNA COIL, IN FLAMES, SONIC SYNDICATE and KAMELOT, among many others. Ullaeus oversaw all of FIREWIND’s visuals on the band’s last two albums.

Commented Gus: “The video for ‘World on Fire’ was shot entirely on green screen and I think this time Patric Ullaeus has outdone himself!

“The concept is based on the album cover artwork and it’s something we’re doing for the first time on a video of ours. There’s a barbaric vibe to it, lots of fire, metal warriors and even a Valkyrie.

“We’re very pleased with the final result and we believe this is our best video yet. Check it out and let the FIREWIND rage on!”

“World On Fire” comes off FIREWIND’s new album, “Days Of Defiance”, which is scheduled for release on October 26 (one day earlier internationally) via Century Media Records. The CD’s striking cover artwork was designed by the band’s longtime partner in all design matters, Gustavo Sazes, and can be viewed below.

Commented Gus: “I’m very excited and cannot wait for our fans to listen to our new album! We feel we’ve captured great performances and took our songwriting to the next level on this one. There’s tons of cool guitar on there and I believe Bob [Katsionis] has finally managed to reach warp-speed with his keyboard solos! Even more seriously, I highly recommend that you listen to this album at a very loud volume.

“As for the artwork, it was once again done by our visual wizard and webmaster extraordinaire, Gustavo Sazes. This time we asked Gustavo to come up with a great landscape scenery, with a more traditional approach and even get the ‘pencil’ style of artwork on there, but also combine it with more modern stuff. So, he gave us that… with a slight futuristic, sci-fi element and I think the end result is stunning!”

“Days Of Defiance” is described in a press release as “a truly ambitious and dynamic opus featuring some of the most brilliant guitar playing the genre has seen in many years.”

The “World On Fire” single was made available for purchase on digital platforms starting on August 17.

Commented Gus G.: “Usually when we write an album we let the music come to us and go with the flow. Maybe that’s why our albums have variety and you can hear everything from super-heavy songs to speed-metal shredding to rock anthems and ballads. ‘Days Of Defiance’ wasn’t much different in the making, but this time we recorded almost all of it in our home studios, which allowed us to be more relaxed. That’s why I feel the new album features the best performances by all of us. One of our main goals, though, was to get a bit more of an ‘unpolished’ sound and be more raw. I think we achieved it and that gives an extra heaviness to the overall sound.”

FIREWIND’s 2010 lineup (from left to right in photo below):

“The Premonition”, the latest album from FIREWIND, was released on vinyl on March 8 via Century Media Records. The band’s first-ever vinyl release contains one bonus track.