Against The Society – Dignity 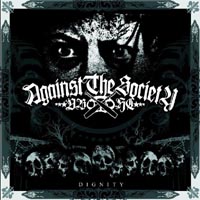 I guess that it was about time for our country to show a bigger interest in a genre with such a big historical background that despite the fact that has offered many values at the aggressive musical archives, it has remained more underground than I think it should have been.

Fortunately enough, the past two years hardcore music has increasingly become more popular to our area with the very pleasant fact that the concurs of the bands plus their quality has increased as well. One of those bands that have a few things further to add to our topical scene is “Against The Society”. Originated from the city of Volos and followed by a remarkable biography for sharing the stage with numerous worldwide artists such as “Walls Of Jericho”, “Cataract”, “Have Heart”, “Brothers In Blood” and many more, they have released their second EP titled “Dignity” which we are going to present below.

The name seemed familiar, I was quite sure that I have seen those guys perform live in the past and I couldn’t justify the fact that I didn’t remember anything from their show, but I was mistaken since I only knew them by attending a concert in which they were the headlining act but due to transfer reasons I had to leave earlier. That makes a sense cause I couldn’t believe that such a studio work would abstain so far from a live reality in a point that I wouldn’t remember anything from them. But let’s pass to the main subject.

“Dignity” is consisted of five tracks, pure and complete representative of the hardcore spirit exactly as a typical fan would ask for and that’s the reason I totally disagree on another review that suggests them to seek for a more personal style, since I do not thing that a hardcore fan would ask for something more complicated. The album starts with a mini intro and it is followed by the song “Nothing You Can Prove”, a song that even from the first time it took it’s place to my player, it made me think that it would create a blast in a live performance and it continues with three more songs, all in the same hard-boiled mode and without any odd tries of novelty that would proof a cynical aspect of the album. Some of the elements that prevail apart from the well-oiled vocals and the furiously constant riffs, is the classical sing-alongs, the inconspicuous beatdown rhythms and the grind-styled pig squeels which I personally do not prefer since I am more in the old school stuff but in this album they totally fit and aren’t becoming tiresome at all.

The album completes with the song “Pride” which I think is my favorite of all and summing up, the effect that stays after all these is that “Against The Society” have succeed to gain the positive press reviews with clear “dignity”.