The Silent Rage – Harvester Of Souls 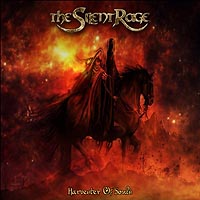 This is the new effort of the heavy/power metal quintet from Athens, The Silent Rage. Two years after the self titled EP, it is about time to release the second EP entitled ”Harvester Of Souls”, which finds them a step higher compared to their past. It was a tough period for the leader of the band Nikos Siglidis, as he has been left the only remaining original member and had to find new musicians from the beginnint. To look for someone to play in your band may seem easy. To find him though, is not easy at all. You have to know if he can adapt to what you want, apart from being a great player. It seems that the time taken for the whole team to be completed was worth the wait and now we can focus on the release itself.

Consisting of five songs, three of them being already known from the previous EP and two new ones, show the band in tremendous shape and able to achieve something really good in the future. ”Perished In Flames” is the classic song of the band, sounding extra heavy and pounding in its new version, exactly the same thing happening with the two other songs that had been on the first EP, meaning ”Leading The Legions” and ”Wings Of Tragedy”. Sounding completely different and surely better and more mature than two years ago, also being able to listen to them live, they work much better on such occasion and I can surely tell that the new members have a big credit on that, adding a lot elements to the early skeleton of these tracks.

This progress in TSR’s music shows much better on the two new songs, which sound a far cry forward compared to the old ones. Meaning that the band has found the right form of playing, exposing its skills much better this way. Fast and melodic tunes like ”Inner Scars” with the great chorus and the harsh vocals put in the right place to make it one of the two wild cards of this release. Especially the new rhythm section kicks serious ass and the new guitar player plays some great lead stuff, creating a great guitar duo that is the guiding force to all the songs, old and new ones. The other new track is the title track of this release, which is as far as I know the direction that the band intends to follow in the near future.

The new singer totally owns these two new songs and he also gives good interpretations to the old ones, proving to be a good fit for the band. The renewed TSR shows ready for the next big step which is going to be the recording of their first full length. Praises to the guys for the great production they did (done by the two guitar players) and for presenting a work that is very carefully structured (cover, production, compositions). It is certain that they are one of the bands of Greece that will hold the flag of heavy music very high in the future. Right playing, without sounding old, despite being influenced by classic groups. All is set right, let’s hope for no more line – up changes and they can claim they will do something really special. The road is open and the dogs are loose.