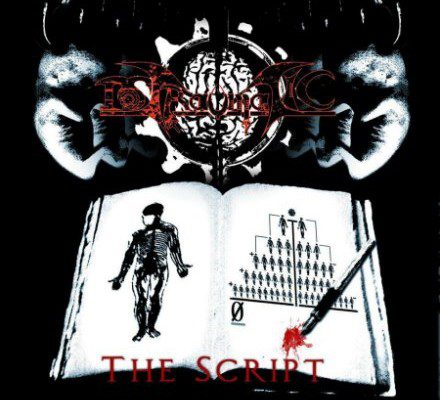 Well, well what we have here? But of course one of the most unique cases of Technical Thrash metal mixed up with industrial in the Greek scene: Postraumatic. When I saw them playing live and from songs I heard on YouTube, I was rather surprised to see they were not playing straightforward extreme metal and trying to experiment with industrial sounds and samples. Sure I enjoy the old school approach to one of my favorite sub-genres of metal, but when it comes with originality and mood for experimentation that’s when I like it a bit more. And it’s one of those bands that their sound was embraced despite the unusual form it had. Lyricwise they deal with issues of manipulation, suffering, politics, human and animal rights as well as psychology.

Their debut album is called “The Script” and it starts off with a sampled intro called “Balance Of Reactions” that sounds as if it was taken from a sci-fi/thriller movie soundtrack, really eerie and dark. “Rectified Conscience” begins with a small lead intro then into an industrial-influenced rhythm pattern. A sound really technical and cold, like Strapping Young Lad, Machine Head and some Death/Grind elements put together, never forgetting to speed up when necessary including great melodic soloing. A chanting intro along with more sci-fi-related samples lead us to “Recycling The Gods” that kicks in with a more Thrashy midtempo riff, always with the engines sounds adding to the eerie atmosphere of the record. Also we have to mention the cold yet passionate voice of Stelios, who sounds like desperately calling out for help after being held captive of a machine world (which sometimes doesn’t stray away from the reality we live in), and the masterwork done as expected by David Prudent (thank this man for the majority of the great productions in the Greek rock/metal scene) since every single instrument is audible adding to such a demanding sound result. “Us (The Voiceless) Who Watch Them” starts with a eerie guitar melody only to turn into another soul-eating midtempo song filled with melancholy and desperation. A more straightforward Thrash riff brings in “Monetary Sanity” with some more eerie melodies grooving over it making it sound like a beast inside a cage, that would devastate everything in its path if set loose.

The dark industrial atmosphere gets even darker with “Forgotten Venus”, heavy, desperate and melancholic. Breakdowns kick in with “The Slept” along with the ever present melancholic melodies ending with a creepy piano melody. Fade in samples bring another fast-paced intro riff ripping through our ears on “The Inhumane” (probably the most straightforward track on the whole record, strategically placed I’d say to spark the listeners interest even more) sounding as if taken off Machine Head‘s “Burn My Eyes”. “Global Skinner Box” (what a title for a song eh?) has a baby crying intro to start over, and some keyboard melodies lost in the distance, like a broken music box, with some distorted narrations, as a soundtrack of some lost sci-fi film (yes I can’t say this enough). “The Behaviourist” is the final track starting in a Thrashing way even reminiscent of Destruction then grooving in the vein of Machine Head and from that to an almost Black metal darkened tremolo picked riff to suddenly end the album. These sudden endings on this song and on “Rectified Conscience (Re)Production” sound as if you woke up from a terrible nightmare that felt so painful, so real.

This is simply a breathtaking release for the Greek scene, an experiment executed to perfection. Mixing Technical Thrash metal with industrial and even hints of Death/Grind/Black metal, never sounded so cold, so flawless and so purifying. May you continue to make some of our worst nightmares come true. Perfect!