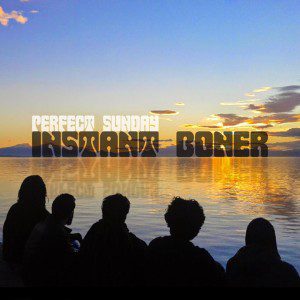 That is a ballsy choice of name! And when you have a strange band name, you need to be able to support it with awesome music, so that the listener will concentrate on the content making the name seem like a sensible choice. As you can see from the rating, these youngsters (three members are 22 years old and still in college) from Thessaloniki managed to do that thing precisely.

When it comes to the valuable content of “Perfect Sunday”, we are talking about your classic, recognizable Greek fuzzy stoner sound, infused with modern European psychedelic elements, plus that strange quality most of the Greek stoner bands seem to have where you can easily remember almost each track after just one hearing. They just get stuck inside your mind, like you’ve heard them one thousand times, almost in the way of 80’s heavy metal radio hit style of songwriting.

In any case, I believe that the term “stoner” for this debut is quite restrictive. It’s apparent that that these guys are also enthusiasts of 70’s heavy rock (maybe progressive rock as well) from the very beginning of the album with the smooth, yet powerful and addicting “Illusions my guide”. However, when the stoner element comes, it smacks you hard, right on the face (or the neck, you know what I mean) and it goes to show that we are dealing with some genuine offsprings of old Nightstalker and Eleven the hard way era Planet of Zeus. Check the groovy riffs in the end of “Illusions be my guide” or all over “Slacker” for example, it’s all right there.

What I really like about this album is that although it may seem raw (from the artwork to the sound of the instruments and vocals), it doesn’t fail to deliver! The fear of amateurism disappears from the first track and it’s apparent that we have a working mixture of needed professionalism with young passion in our hands. It’s that passion that drives them to incorporate innovative and surprising elements like that Native American sounding choir around the third minute of “Dirty roads”, the gang vocal, thrash-reminding, chorus on “Head filled with smoke”, various double solos and most of all drives them to the creation of the same titled track.

“Perfect Sunday” is the undisputed winner of this album. It stands considerably taller than all the other songs and forces you to appreciate these guys the moment that you hear it. It is 13 minutes long, it smells of Samsara Blues Experiment (and maybe a bit of Pink Floyd) from miles away and it is their most experimental effort, a tribute to 70’s psychedelic rock. I’m talking about echoing vocals, reverb and general pedal working on the guitars creating beautiful melodies and solos, the a-ma-zing and totally unexpected use of saxophone, without the omission of badass, heavy stoner riffs on the beginning and ending of the song. I also loved it because it allows the singer to show his true possibilities and maybe the course he should follow from now on. Yes, I do like his effort on the hoarse singing style he adopts on most of the album but when he takes the speed and the rawness down a notch and focuses on the deeper and more pompous tone, that’s when he really shines (and brings up a rather vivid image of Samsara Blues Experiment’s singer on my mind).

At the end of the album there is a sample of people screaming “SHUT UP!!!” . Well, I certainly hope that “Instant Boner” won’t shut up at all in the future and they’ll give us more material fit for lazy summers, maybe even more experimental and psychedelic than this one, focusing on the spirit of the same titled track.