A few days ago Metalpaths met Gojira’s frontman Joe Duplantier and talked about the band’s latest record, their co-operation with Randy Blythe and Cavalera brothers, as well as their upcoming plans and early period. The interview is available in both video and text format.

What’s up everybody, this is Rena From Metalpaths, and we are ready to “Rock in Athens” with Gojira! Hello Joe, it’s nice to have you here with us today!

There has been about a year since the release of “The Way Of All Flesh”, so I guess that this is the high time that you can evaluate the record’s process which has received some worldwide astonishing press reviews. Did you expect it to be that way?

Actually we’re a bit surprised to be so good in the press. I mean we were not expecting anything really because the previous album was a good success for us already, it was amazing and everybody was expecting something and we don’t feel that special you know, so we’re like ok we’re playing our music but let’s see what happens and actually it’s doing great, it feels great.

The album’s sound differs pretty much “From Mars To Sirius” record. I’d say that even a fan of the post rock scene would pleasantly listen to it. Do you thing that this change of sound came to you as a normal progress or is it something that you tried to manage?

Usually we try not to give a certain direction to the sound or the music really but we just follow our hearts so we just play the music that we feel and that we want to hear.

Maybe it depends on your playlist as well.

Yes and on the experience also. We toured for three years on “From Mars to Sirius”, we did a lot of tours in the States and all over Europe and we were in a certain mood and a certain energy, live energy and we were like ok let’s do an album that is really rough and really straight to the point and that’s how we started to compose this album, in this state of mind. So I think it’s a really live energy, really intense kind of composition.

How did you decide to involve Randy Blythe from Lamb Of God as a guest  in the song “Adoration for None”?

We didn’t decide anything, he did! I was with him in the States for a couple of weeks, we went on a fishing trip together and camping trip and we had a lot of fun, starting fires you know… 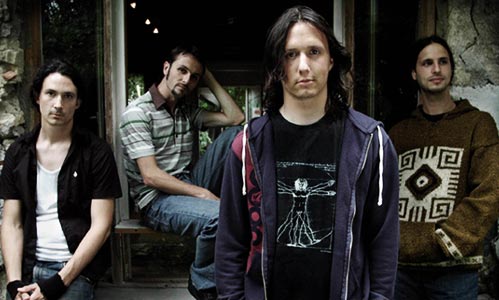 Fishing? You are into the green matters so much, you are not a vegetarian?

Well I eat fish actually, but we caught some fish and then put it back in the water so we didn’t hurt the fish really. He told me: “When do you guys record the next album? I want to be on the record!”, so that’s how it happened. I was like OK!
That’s great, it doesn’t happen every day.

Exactly. Of course it’s a good promotion for the band, it’s really helping in the States, we know all that, but truly it’s a friendship thing you know, otherwise I wouldn’t be hanging out with him in the States. We became friends really.

Your lyrics is a strong part to the whole Gojira outfit. Is it easy for you to sit down and write for all those heavy matters? Do you read any books and then your imagination grows maybe?

Yes, sometimes. I don’t read that much, I read some books that influence me a lot sometimes but I’m not a deep reader you know, I have I guess a good imagination and all the lyrics are based on human feelings so it’s something we all know, how hard it is to be on this world. Even to breathe can be hard. That’s what babies’ first thing to do is they cry, right? So it means that the world is tough. So there’s a lot of matters to use for the songs and the will to live and wanting to be better person, is a big motivation for the lyrics also.

Rolling back in time, there is a huge change from the “Possessed” demo to your today’s works. What pushed you to this musical direction? But it seems that you kinda answered that on the second question.

Actually I remember back in the days we were big fans of Morbid Angel and this old school death metal scene.  It’s a very rich music, there are so many different tones, minor tones and crazy structures and you can go in crazy ways, like technical ways or melodic ways, so it was really interesting for a start. We evolved

to something more open I think.

What do you have to reply to the negative comments from people who say that Metal music is not about “Flying Whales”?
I don’t give a shit about them. We feel free to do what we do.

Exactly, it’s just music and words and images, so people who try to analyze it, they should just relax and listen to the music and if they don’t like it, they just should listen to something else.

You and Mario are brothers, I guess that your mother should be very proud, isn’t she?

She is too proud, she is annoying sometimes! Just kidding. But she is our first fan. 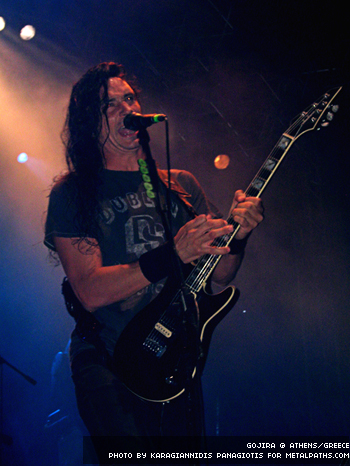 Tell us a few things about the early period of the “Duplantier” bros.

When we started Mario didn’t have drums really, he had to play with plates and on the table and chairs.

How old was he?

He was eight years old.

Yeah, I was thirteen and we were listening to Dire Straights and Queen, but then I discovered Metallica when I was in the high school and just changed my life and Mario was starring at me and was like: “What are you listening to, it’s noise!” And I was “No, let’s listen to this, it’s great!” and he got caught when he was thirteen and my mother bought him the drums, that’s how we started.

She is really the first fan!

Yes she is. She pushed us a lot to do what we wanted to do.

That’s so important. You have shared the stage with many great artists, which was your all time favorite act and why?

Yeah, that you played together.

I can’t remember there are so many, but one tour that was very important for the band was the Lamb Of God tour because we became good friends with the guys from Lamb Of God, all of them. It was a great experience for us because it was the first major tour in the US with big venues, sometimes 4000 people. We were kind of new on States so to me it was probably the best experience. Lamb Of God live are just amazing so to me it was probably the best.

And what is the craziest thing that has ever happened to you while touring?

We forgot the guitar player in Montreal once.

We didn’t forget him really but he went out of the bus right before the bus go and we left Montreal, went to the States and everyone was sleeping, it was 5 in the morning and he didn’t get back on time so he was left alone, he was freezing, he was wearing a t-shirt and shorts and he had no phone, no credit card, so once we got on the US border we had a phone call from him from the hotel and he was like “I’m lost in Montreal, sorry!” So we had to go back to Montreal and we got in trouble with the police at the border so that was the craziest. 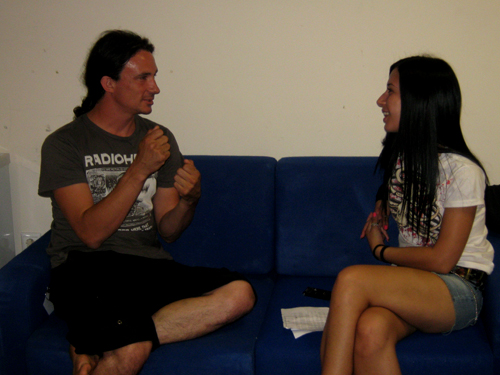 You have quite recently been in a position that many musicians would die for and of course I mean working with the Cavalera brothers. Did you have a good co-operation? Tell me a few things about that.

Yeah, it’s like a dream that I have to rethink about it. It’s amazing, I was not expecting that. We received an e-mail a few days before it happened from Roadrunner Records, they were looking for a bass player and they thought of Jean-Michelle but he was not available at that time so I jumped in and I was “OK I can do it”! I think they wanted to collaborate with someone from Gojira in the end. Max is a big fan of Gojira since years, I didn’t know that, he told me.

Have you kept any relationships with them?

Yeah sure, I just saw Igor a few days ago on a festival and Marc Rizzo the guitar player, I see him once in a while. They are just normal people, down to earth, very easygoing, it was amazing to play bass with them, with the brothers. I was not saying one word, I was just watching and listening to them and Max really made me feel comfortable, he was like “Joe do you have an idea or something?”, so it was like a normal situation of a band rehearsing. It was all awesome!

You are one of the very few bands who managed to keep the same lineup from the beginning of your career until now. Have you ever had any strong fight between you and the gate-post that caused any serious problems?

We never really fought like beat each other, but sometimes you have to deal with tensions. You know being twelve people in the bus it’s hard sometimes. Especially when we go out for three months and then we come back home for one week and then we go back on the road for two months, yeah sometimes it’s tough.

But you never fought about the music, about the style that you are going to follow.

Never, we really agree on that.

It seems from the result, the musicianship is so strong in the albums, you can feel that.

That’s great! Yeah sometimes it happens, people don’t agree on the style, “We shouldn’t go on this direction, we should be more easylistening” or whatever. We don’t have that problem.

What made you so keen on environmental and green matters?

We don’t consider ourselves a political band or we don’t really see ourselves as echo warriors. For example we just feel that we’re normal you know, we care about the planet and just sometimes in the songs we will talk about it but we don’t want to preach too much or to tell people what they should do. It’s just a feeling about the world in general and I think the press needed to somehow find a way to describe the lyrics so they call us environmentalists but it’s not us, it’s not coming from us really.

Are there any plans for a new record?

Sure but for now we are on the road for this album and we have a hard time composing and touring at the same time, so we need sometime off to be able to create a new material and it will be for next year probably.

Before we close, do you have any advice to new born artists?

Believe in what you do and work hard and listen to other people but not too much. Listen to your heart, just do your stuff and if you work hard it will work.

Thank you very much, wish you a great show and I hope we’ll see you again soon to our country.

Yeah I’m sure, thank you very much!