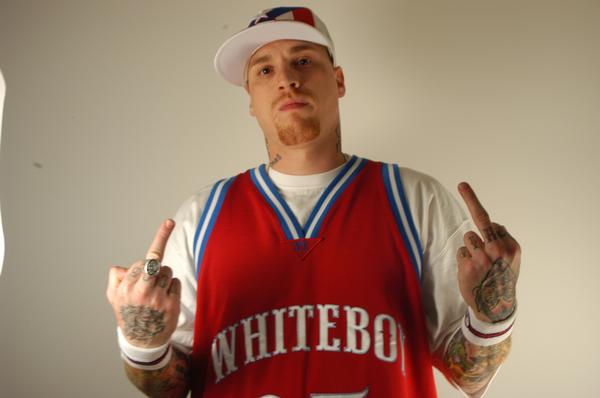 Hi Ezec, it’s nice doing an interview with you. So, ten years have passed since Skarhead’s latest record, but now you’re back with “Drugs, Music and Sex”, a record strong enough to justify our eagerness. How is the album going so far?

The record is selling real good. It is one of the hardest hardcore records out right now!

And what was the reason you didn’t enter the studio for so long?

I wanted to do a record 5 years ago but I had no time. I was working on mad projects so I had no down time. I finally said “Fuck it” and called Laurens from I Scream records and told him I had a week off so lets record an album.

There are two promo videos for the songs “D.F.F.” and “PSP” from the released album. Could you report us the shooting process and how did you reach the whole ideas?

Both videos were directed by my manager Don Capria. He came up with both story lines. The first video D.F.F. was shot at the Black N’ Blue bowl last year and the other video was shot at a strip club in my old neighborhood!!! I actually grew up a block away from the strip club in Queens. We all had a great time doing both videos.

Based on what we see in D.F.F., shall we presume that there is some kind of a sponsorship from “Pitchfork Hardwear”?

My brother’s own the company… Skarhead is also sponsored by Tribal. I got mad sponsors!

Coming from a totally different world, I am also one of those fans of the NY scene who are really interested in learning a few things about the DMS crew and of course I feel like I couldn’t find the best person to ask about it. So, what does DMS stand for?

And which are the bands that belong to the crew?

There are a few. We have bands and artist from all kinds of music. Mainly hardcore and hip-hop. Madball, Panic, Slaine, The Shotblockers, Ceekay Jones, Skam Dust are just a few… 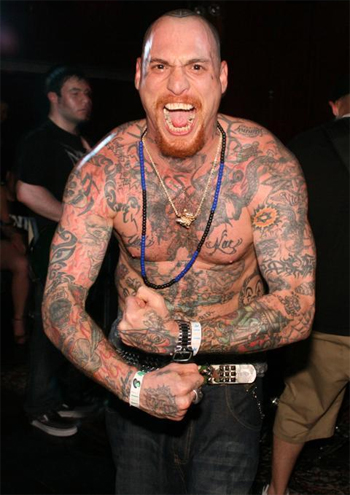 There are quite a few scenarios about it’s meaning, but the exact is “Dirty Money Syndicate”, isn’t it? Why did you choose to name it like that?

When I do the music I use Dirty Money Syndicate…

What exactly is the meaning of a crew in the States? It would surely be a strong reason for someone to get into a fight, right? Could you describe any crazy story that has happened because of this?

It is a family. We handle our own business. I don’t kiss and tell.

Many people from all around the globe are excited about DMS and don’t miss to support it any way they can. Is that careless to you or is it something that makes you feel proud of?

I love that we have a big movement with our music. DMS is hardcore. I tell the fans that the letters are for family only!!! If you are a fan and want to support then buy the music and show love. I even tell the fans now to put ILL-ROC as the movement. A fan can’t put DMS on them cause it is only for family but a fan can put ILL-ROC up cause it is the name for our movement!

There’s a strong connection between hardcore music and it’s lifestyle with the hip-hop culture but still, there are those narrow-minded who insist that there should not be any kind of correlation between those two. You, being one of the people that belong equal to both scenes, what are the reasons you believe that this connection exists?

I am a street kid. I was brought up on both. Hardcore is straight street music and so is hip-hop. I combine both styles of music and make it hard as hell!

Is this where “Thugcore” derives from?

How is a typical hardcore live show in your area? Do you believe that the shows receive the proper feedback from the fans?

No matter where we are Skarhead kills it live on stage!!! The fans know that so they come out and support.

Beyond others, you are also well-known about the numerous co-operations with many artists from different style bands/genres. Is it difficult for you to be a faithful dad/husband and band-mate as well?

No, it just makes me work harder and harder now. I got a son to take care of. I am a man who puts 110% into everything I do. I drink, Fuck and Fight with that motto! Also change diapers within the same attitude (laughs).

What are your impressions from your last show in Athens? Would you like or planning to come back to our country?

Skarhead will be playing Greece in the summer. I love Greece and I love the Greek people. I grew up in Queens and went to school in Astoria, Queens wich is all Greek people. My best friend since I was 1 years old is Demitrious Babousis… Now that is mad Greek.

We appreciate your time, so we won’t keep you any longer. Before we close, what are Danny Diablo’s direct plans?

I will be touring with Skarhead for the next few months. The new Danny Diablo record “International Hardcore Superstar” is out now on Itunes. You can buy the c.d. in March from Hellcat Records. Check out ill-rocrecords.com for all the new hot music. I have a webstore on the site so you can buy mad new ILL-ROC RECORDS music. I put out the old Crown Of Thornz and Skrahead stuff on ILL-ROC RECORDS. You can buy all Skarhead and Danny Diablo merch straight from my site. Check out the ILL-ROC Myspace page also. New Panic, Grizz Rock, Diggy, and Shotblocker music ready for Greece.

Thanks a lot for answering we hope to see you soon perform and good luck with all of your plans.