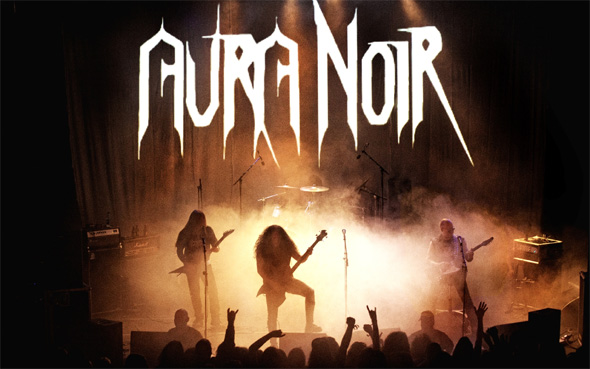 On ocassion of Aura Noir’s recent release “Out To Die”, Apollyon talks about the writing process of the album, the fact that two songs have been leaked before the album’s official release and explains why they call themselves the ugliest band in the world.

After 4 years, you released now your fifth album. How would you compare “Out To Die” with your previous albums?

I’m still waiting for my fucking vinyl copy.I heard the cd in my worthless car stereo a month ago and it sounded fine. Concerning the music, it’s much like before, faster than Hades rise, but Hades rise was an exception. Right now I’m just focused on making a new album and having more time to mix/master it than this time. Because it was quite hectic and to be honest we didn’t even have the chance to listen to the final result before it was sent away for printing.

How does it feels to have Aggressor back fully in the band since his accident ?

Feels right. Obviously he never left the band, we just needed a break after his accident, but we did some shows without him. That felt a bit strange.

Aggressor and you have different approaches in writing songs. In what ways exactly are they different ?

Exactly ? (Laughs).It’s not maths it’s music. He has a different style of playing and writing lyrics and is a different person than I am, so we don’t make the same songs. Our goal is the same though. 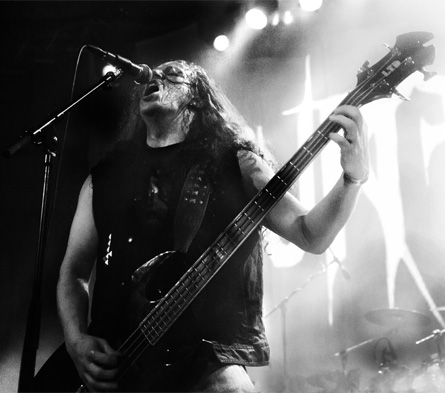 Is it only the way you write music, or you follow different ways while writing the lyrics ?

Everything is different. I haven’t asked him how he writes lyrics though. I tend to let the music inspire me to write the lyrics. Maybe he mostly writes them in beforehand. I don’t know.

I’ve read somewhere that you think Aggressor’s songs are more “intelligent” than yours. Why do you say that ?

Because in my opinion his way of writing is more a-typical and I feel that his songs last longer that way. Aggressor’s songs always keep growing on me while I get tired of mine much sooner.

Blasphemer didn’t take part at all in “Hades Rise”, as he was touring with Mayhem at that time. Did he contribute in any way in “Out To Die” or it is all you and Aggressor ?

I’ve heard that two tracks of your new album leaked earlier and were posted on YouTube without your authorization. How did that happen? How did it make you feel?

Like I said before,we didn’t even have the chance to listen to the final version ourselves before it was sent away,because of a silly deadline that I hope we never ever have to care about again. Everything became extremely stressful.We were supposed to record everything in Nekromantheon’s studio, but their recorder started fucking with us after I had laid the drums, so we had to move everything to my studio. I had just moved so my studio stuff was everywhere in cardboard boxes in different parts of the country.. simultaneously we had to use a third studio to mix the album..and with these delays we were already in the middle of christmas holidays and not many studios are available. So basically we didn’t have time to quality check anything. The vocals and guitar leads had to be done in a hurry, which is fucking annoying when you’ve spent 2 years making the songs.The mix was done in a hurry as well. The first master was so horribly clean and nice sounding that I gave orders to the technician to “destroy” the album by setting all the wrong frequencies extremely loud. I mean we’re the ugliest band in the world, not the nicest. He did so and it sounded ridiculous, but much better than the nice version. After that the record label let him make one final master, and they sent it away. I never even heard it. So when one week later,3 months before the release, I see two songs from the album already on youtube, I think you can imagine what went through my head. Just total disrespect.We are forced to keep this ridiculous deadline,then what happens is that our label has sent a link for downloading the album to some “key magazines”…why the hell they needed to have the album before me is just beyond comprehension. It’s music business at it’s worst. And how “KEY” are these magazines if their journalists don’t care more about the artists than putting the album online 3 months before the release? It still pisses me off. I don’t mind our music being on youtube,but preferably AFTER the release.

Last year you toured a lot. For the first time you played in the USA and Canada. Can you tell a few things about this tour? Any highlights? What were your impressions generally? 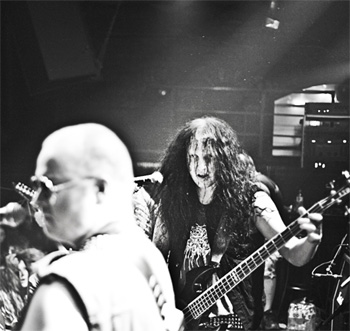 It was actually our second time in the US because we played maryland death fest in 2009. Anyway it was good as always. We started out playing MDF again, then went to play 6 shows with marduk before we split and did new york and LA and mexico city by ourselves. Every day was a highlight even the lesser crowded places such as detroit and wilmington. A memorable thing that happened was that we played a small set in sadistik intent’s rehearsalroom in L.A. Just for them and a couple of their friends.

I’ve heard many times that the audiences here in Europe are very different from the ones in the US. How would you compare them ?

I think european crowds are very different too. I’d say the US crowd is like a good european crowd. It depends who’s playing too you know. But in general you can say that playing a club in a german city is not what it used to be, because they have 20 shows to choose from every week. But I mean, we don’t sound like any of those other 20 bands and we haven’t played much live outside Norway, so we are used to having excited fans at our shows.

You refer to yourselves as “the ugliest band in the world”. What do you think makes you ugly? Are there any other ugly bands?

Our minds and music is what makes us ugly. I think Deathhammer from norway are quite ugly. Darkthrone too. Darkness descends is a very ugly album because it’s pretty un-hummable and merciless.

All three members of Aura Noir have other music projects too. Aggressor is in Virus, Blasphemer is in Ava Inferi and Nader Sadek, and you are in Immortal and Waklevoren. Does it ever feel like you are a bit too scattered? Does the fact that, with Aura Noir you release an album every four years approximately, help you re-orientate, and focus on each band fully?

We actually just broke up waklevoren. Immortal doesn’t steal any time from Aura Noir and neither does Lamented Souls, my doom metal band that hasn’t recorded anything for 12 years..(laughs). Anyway right now there is not much hindering us in playing.The ever returning issue is economy. That’s the worst threat. Lately we’ve even lived extremely far away from each other. Now at least I moved closer to Aggressor and Tank(our drummer), so let’s hope. We were supposed to rehearse tomorrow, but non of us has 20 euros to rent a reheasal room so we had to cancel it. I’m sure people even think we are rock stars…(laughs)

You are now signed to Indie Records, but your previous two albums were released but Tyrant Syndicate of Nocturno Culto. What happened and you decided to discontinue your collaboration?

What’s in store now for Aura Noir? Are you continuing with the touring? Have you done any release concerts?

We did a small tour in Norway in February with Nekromantheon.Then we’re going to Finland for a show, a festival in Holland, small UK/Ireland-tour, Hell’s pleasure and Wacken in Germany. Metal Town in Gothenburg, maybe a festival in Lithuania..then after summer we will do a small european tour plus north and south america…if all goes well. Also we’re going to work on the new album.

Thank you very much for your time! You may close this interview as you like!