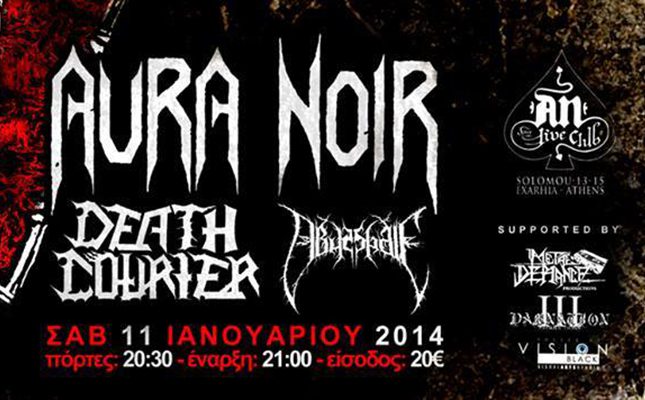 Saturday night at An Club ready for an extreme metal night to be remembered: After 10 years and one gig cancelling 2 years ago, Aura Noir the hellish originators of Black/Thrash from Norway have come to Greece for a special live show. On their side, the old school of Death/Thrash Death Courier from Patras and the really strong Blacksters Abyssgale, who hit the stage at 9 o clock.

With a sound between the Norwegian Black metal style combined with a good amount of Thrash influences deriving from Sodom, Destruction and Celtic Frost, they stomped the stage with emphasis basing their set on “The Coming Plague” EP plus 3 songs of their upcoming album “Hegemon” (“Execution Litany”, “Anoint Wounds With Poison”, “Hegemon” and “Altar Thane Of Mental Alienation”) showing that the best is yet to come for them. We also had the first small circle pits of the night.

Then we have the mighty Death Courier, the Death/Thrashers from Patras who came back with their amazing “Perimortem” album ripping it out old school way showing the younger people how things should be done. Unfortunately the crowd wasn’t pretty energetic in terms of moshing since everyone awaited for the headliners of the night, yet everyone had a good time and headbanged as much as possible. The set of Death Courier included the entire “Perimortem” record in their set alongside the tracks “Demise”, “Copkiller” and a cover of Possessed’s classic “The Exorcist”!

The band everyone was waiting for finally took the stage and from the first track to the last one the only thing left to say was this: violent moshing, stagediving and Black/Thrash lessons delivered to those unaware. Including material from every album of their career (“Black Thrash Attack”, “Dreams Like Desert”, “Deep Tracts Of Hell”, “The Merciless”, “Hades Rise”, “Out To Die”) they showed everybody how things were done with amazing tracks such as “Sons Of Hades”, “Black Thrash Attack” and “Conqueror” whipping the crowd into an absolute frenzy, really paying off the band that celebrates their 10th anniversary of their last show in Greece. Even though their bass player was unlucky with his bass, since his string broke on the first track, no one was really bothered by it chanting “AURA NOIR! AURA NOIR!” as loud as possible and that fired up the band to give in 100% of their capabilities. They included a cover of the Celtic Frost classic “Dethroned Emperor” to finish up any neck left unbroken from furious headbanging. Everybody left satisfied when the lights went on. Wish every one in Metal Defiance that put up this event well and as the band said “We are Aura Noir THE UGLIEST BAND IN THE WORLD!”. Let’s hope we’ll see more of that in the future.