Very few are left to be said for Rotting Christ, one of the bands that defined the unique Hellenic black metal sound hailed by even the great Norwegian black metal bands. They are about to release their new album “Κατα Τον Δαίμονα Εαυτού” on March 1st and Metalpaths.com had the chance to talk with their frontman Sakis Tolis to learn more about the new record and a series of other interesting things around the band and not only… by John Savvidis

Your previous album “Aealo” came out 3 years ago. How was tour?

It was really good! I know, most people say that but it was a big tour, we even played in Australia which I’ve never been before and I think that the people have really accepted the latest album especially the Greek elements in it.

Thats for sure considering that “Theogonia” was the breakthrough when it comes to Greek elements in your music.

I have to say that I was a bit scared of how the fans are going to react on these Greek elements. People still ask me about the lyrics, you know, “what does that phrase mean?” etc… Some of them have some really good knowledge of the Greek culture and really wanted to know what the lyrics are talking about. 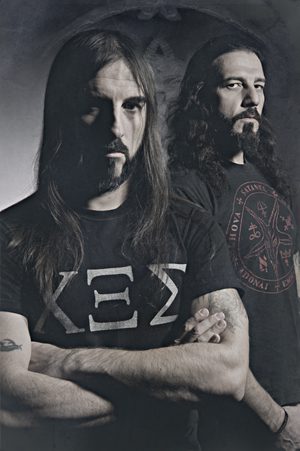 Your long time band mate Andreas Lagios (bass) and George Bokos (lead guitar) left the band and were replaced, at least for the needs of “Nuclear War Now!” festival, by Magus Wampyr Daoloth  and Jim Mutilator. How did that happen?

Look, everything in life has a beginning and an ending. Our cooperation with these guys for personal reasons had reached its end but the basic members are still here so there’s no problem with us going on. The guys themselves keep on playing and doing other stuff as well. I also wanted to make an effort to gather the members of the early line up for some shows. The “Nuclear War Now!” fest did occur but for the rest of the shows due to personal reasons Magus and Mitulator couldn’t make it, so we recruited Vaggelis Karzis (bass) and George Emmanuel (guitar).

How did it came out with them?

We simply called them up to help us from my hometown in order to keep on playing as a band. Time shall tell whether they’re going to be permanent members of the band, and this is not only our own wish but also for the interest of our fans. We made a tour with Cradle Of Filth, we played some shows with them and things seem to be going smoothly. It’s the people’s wish that Rotting Christ will keep going strong not only in the studio but also in live shows.

Since we mentioned Magus earlier, we know since spring that one of the most legendary Greek supergroups Thou Art Lord have reunited and recorded a new song 7 years after “Orgia Daemonicum”. What led you guys to the decision to start the band again?

I’m a man who likes to be creative. So I fired up the rest of the guys from Thou Art Lord, in order to make things happen again. I don’t have much time for that left, but we wrote that song and at the moment we’re at the studio recording a new album (that’s all we can say for the time being) which is going to be released somewhere in 2013. I like the idea of Thou Art Lord and sometimes I feel a lot more free when writing music for them, cause I don’t have the stress that I have with Rotting Christ where everything have to be set, big contracts etc and it’s more fun for us to do. We take it seriously definitely but there’s not much pressure from contracts which means I don’t have that strictly professional attitude I have with Rotting Christ…I’d also like us to play some live shows with Thou Art Lord not only in Greece but also abroad. 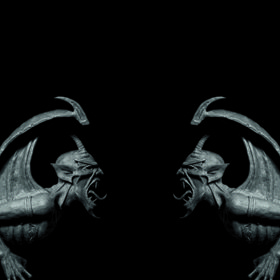 So, going back to Rotting Christ, you are about to release a new album. The first thing we can observe is the title “Κατα Τον Δαιμονα Εαυτού”. The same phrase can be found on Jim Morisson’s tombstone. Do you think that this title describes what Rotting Christ is as a band and the things they want to say all those years?

It just happened to be the same (laughs), we didn’t stole it from Jim Morisson . The album title means: “do what you want” or “do what thou wilt” as seen by Aleister Crowley something existing a lot in the field of black metal and extreme music in general. Demon according to the ancient times is ourselves and when we act according to our demon means that we act according to ourselves. That’s what we wanted to get across as Rotting Christ. It’s basically about the same meaning as “Non Serviam”, let it not be misunderstood with what is written on Jim Morisson’s grave I’ve seen it though. It’s just an ancient Greek quote.

Yeah and it’s almost 20 years this year since “Non Serviam” came out so it’s a really interesting coincidence.

Sure we didn’t do that on purpose it just came out naturally.

So looking at the song titles seems like you wanted to include every religion in the world both lyricwise and titlewise. Did you have something like that in mind when you wrote the lyrics and track titles for this album?

Well, this is a non-standard record, it’s not easy to listen to and it doesn’t have a title “I Love Satan” for instance. It’s something completely different. I wanted to show the multicultural side of the band. As a band we’re not trying to play or be like Americans or Βritish. We have our own personality, we have a part of that which is multicultural, we have lots of cultures and lots of cultural values. It’s a different experience, a journey in the past to some maybe forgotten civilizations. We deal a lot with ancient Gods of the Netherworld even some ancient curses, we have a song that is an African curse. We’ve look into many of these things and that’s the message we’re trying to get across with this album.

Exactly we’ve kept the ethnic element, and we adjust it to the sound of today.

Yeah I get it. Where do you – as composer – spot the differences between this one and “Aealo”?

It’s a different album compared to “Aealo”. The goal for every band is to present something different on every album. As a composer I don’t wanna make an album for the sake of making it or just to make another tour cause I see a lot of bands that are doing this and that’s really sad. I want to see my favorite bands evolving. That’s what I’m trying to do to show an evolutionary side of me on every record. This album is not only different in terms of music but also in terms of production compared to “Aealo”. It’s darker, it’s more occult and it’s probably the darkest and most mystical album we’ve ever made since “Thy Mighty Contract”. So it’s like back to the roots not literally cause Rotting Christ are not merchants of their idea, but it’s close to the early sound of Rotting Christ only adjusted to new standards of production and stuff like this. 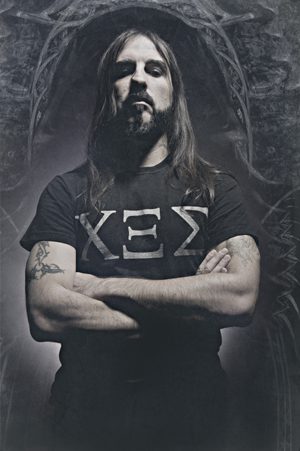 Wouldn’t say the word “old school” playing, Rotting Christ were never a typical true black metal band. It’s just that the whole atmosphere of the record is closer to “Thy Mighty Contract”. I’m really pleased with this result and I don’t know whether other people will feel the same thing, but I’m really pleased.

How much have the new members contributed in writing new music for this album?

For the time being they’ve helped a lot in our live performances, they are really nice and working guys, we need a helping hand on stage. In terms of songwriting now, I don’t think they helped although I’d like them to do so but the thing is that if they did maybe it wouldn’t sound like Rotting Christ. George is a brilliant guitar player For instance but I wouldn’t like to put a Malmsteen-like solo in one of my songs to show off. It’s all team work, it’s all about Rotting Christ. I wish the guys could stay in the band permanently and contribute.

That would be perfect. New members can be a breath of fresh air for a band.

Yeah, it’s a song we recorded for the needs of a soundtrack of a book written by a Swedish author. He asked me to do it and I really liked the concept of the book, I loved the idea. And I’m really happy that we released this split together I like those kind of releases.

It’s really good, it helps people learn about bands through small releases. I wanted to ask you, as one of the main members of the Hellenic black metal, what’s your opinion on the scene today? And which bands set themselves apart from the rest of them?

There are many bands that have set themselves apart from the rest, I won’t even try to mention one of them cause that would be unfair to someone else. Also there’s an orgasm of new bands in the scene, something that didn’t happen 10 years ago, there were no bands to tour back then. Now every band can make tours and make things happen. Sure I cannot like every band but you can tell which bands set themselves apart from the rest, the audience is like an open book nowadays. There are a lot of underground bands that should be supported cause they deserve it. They need a step to make a show or a tour. We’ve seen in our shows lots of promising bands and I wish, I’d like to take those bands on tour with us to help them out fulfill their dream.

Yeah I can recall the Balkans tour in 2007 for “Theogonia” with Suicidal Angels, Mass Infection etc.

Definitely. Sakis, you’ve been around with Rotting since late 80’s. Is there some dream you’d like to fulfill and you haven’t already?

No no, I’m not a greedy man. I’m really satisfied with what I’ve done so far. Well, the band maybe could have been better, we could have sold as much as Metallica for instance but maybe, to be honest, I never wanted to be like Metallica. So I’m really happy with what I’ve achieved so far, my dreams and goals, you know…we once played outside schools. We couldn’t even imagine that we would be touring with great bands some years later. The only thing I want is to be healthy and well to keep on doing what I love: writing music. To make people travel with us when listening to our music, and that’s the most important thing. We’ve even played in the Amazon and people came over and knew our songs that’s the biggest payment for me. When my music touches people this way its the best thing and that’s what I’m passing to the new generation.

So, your new album comes out March 1st. What’s next?

We are doing a Greek tour including nine cities and after that we have a big South American tour!

You’ve toured with some of the biggest bands in the field of black metal and death metal. From all those bands which band was the one that you had the best time with while on tour?

So thank you for this interview Saki. You may end with a message to the fans maybe?

The message is one: Non Serviam and see you on the road! Thank you for hosting our band in your pages and wish you all good luck!