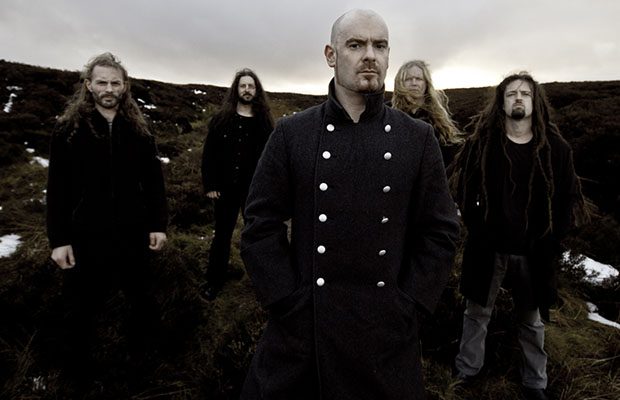 One of my wildest dreams a few years ago was to someday be able to talk with the man whose voice made my spine shiver and my eyes water when I was listening to “Heathen Tribes” or “Coffin Ships”. Well, somebody pinch me because that day is here! Iconic frontman of Primordial, man of many talents and cultural references and in general earth shaker and awe inspirer, Allan Averill a.k.a “Nemtheanga”, finds the time during touring to speak to Metalpaths webzine for many hot topics and personal thoughts, as well as for the upcoming shows of Primordial with Mael Mordha in Athens and Thessaloniki. Enjoy!

Greetings from Greece! Where do we catch you right now? Are you touring, preparing to tour or just relaxing and enjoying life? 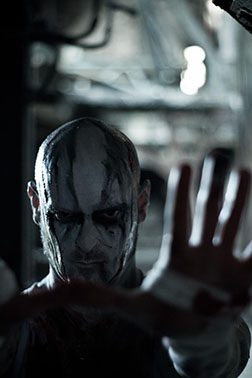 Right now? Just back from a long-long European tour with Twilight Of The Gods together with Negura Bunget and Rotting Christ. Been positive overall but long. Seasons changing now, preparing for another grey Irish winter. No relaxation for the wicked sir!

Over the years we have seen that Primordial are a band that never rush things. So, it has been almost 3 years since the release of the glorious “Redemption At The Puritan’s Hand”. Do you have any plans for recording a new album anytime soon?

Of course. We’ve started working on some ideas but things have moved slowly this year. We’ve been still playing festivals and some shows here and there but getting us all into the same room to work together has been hard. Doing this as life moves on and responsibilities become more strenuous is difficult but slowly the wheels will grind into gear again. We plan to record something hopefully before next summer.

Being a man whose attention is always captured by a great voice, I have to ask you this. Since your first demos, your voice not only hasn’t taken a turn for the worse, yet it keeps getting better and better with time, taking us by storm in each and every new album! And we are talking about 18 long years of singing now. How do you do it? Are there any special techniques and principals that you use or should we start believing you have made a deal with the devil? 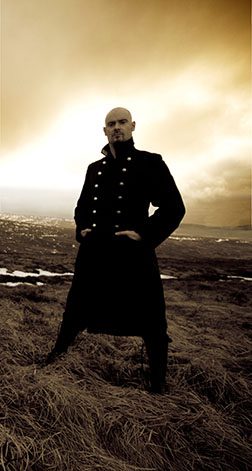 Hmm, well if I wasn’t able to improve and evolve something would be seriously wrong. You just add some more strings to your bow and learn things about technique but also the tone of your voice changes, I’m at this mid stage right now, at middle age and I can hear my voice has changed a lot since even ten years ago. Also I decided personally to approach things with confidence and not second guess myself; to be at least the best version of myself I can be…..

I was never really that into Irish traditional music, was never really my thing like the other guys, they could answer that better than me. Ah, in the beginning when I was a kid it was UFO, Iron Maiden and AC/DC, I wanted to be a combination of Steve Harris and Phil Mogg, which then changed into james hetfield into etc… just the usual childhood heroes really. Then a few bands changed my views and influenced me as I got a little older, Bathory of course, Celtic Frost, Venom, Candlemass, Megadeth, Slayer etc. Outside of metal I suppose over the years the bands/musicians that have had the most impact on me have been leonard cohen, Dead Can Dance, Woven Hand/David Eugene Edwards, Nick Cave, Johnny Cash, Bohren Und Der Club of Gore, Fields of The Nephilim, Joy Division, The Cure, etc..

Speaking of Ireland, we are talking about a nation with a long, bloody past, full of struggle, pain and misery and you chose to give this historical note to your songs, instead of portraying the usual lyrical themes of a blackened doom metal band. What was it that made Primordial decide that was what you wanted to sing about and also, to do so, use the folk sound element, common in the Irish music culture, yet mostly uknown to other doom bands? Do you feel like you’re paying a tribute to all the struggles and fights of the Irish people and thus making your culture known to the planet?

I dont know, really. I just think maybe we didn’t know any other way than this. It’s almost like we didn’t have a choice, we didn’t want to be fantastical or romantic or use the influence of folk music in an obvious way, we always veered towards this dark interpretation of our culture and history. Having said that I never wanted things to only be about Irish culture or folklore, its a common misconception, that we are somehow a ‘Celtic folk’ metal band… Seriously, listen to ‘To The Nameless Dead’….it’s about statehood and nation building and the beginning of the First World War for the most part, we have always been about the here and now, it’s not escapism you know… 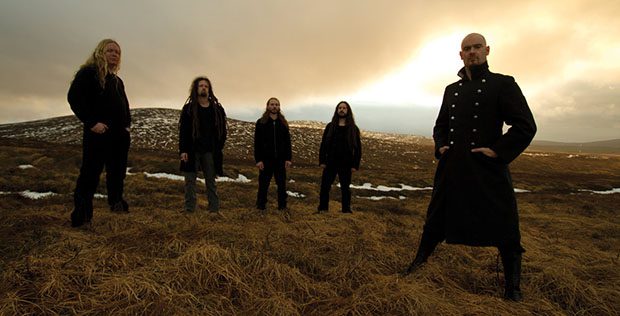 A recurring theme in your lyrics is the bashing of monotheist religions, like Christianity. Do you think they could ever be abolished and if so, would that benefit society?

Really is it? I don’t think I ‘bash’ them, the last album has reflections and observations on faith and religion and some condemnation but it’s also looking at the structure of faith and how we attempt to make sense of mortality. It makes sense that people need a structure to try and make sense of their place not only in the world they live in but the question of the universe and dealing with death, they called the elements as their gods and the gods evolved and morphed into the many gods people call on to try and make sense of their lives in the modern age.

Throughout the years we have seen Primordial maintain the same musical attitude and feeling in your albums, going against the current of trends and the music industry. What is your view on the modern trends in metal (or music in general) and the constant need of the music industry to always produce a new trend for people to follow?

Trends are trends, the world evolves, things move faster than ever before, kids want something instant and then they move on, we live in an age of constant information, second by second. I just get the sense compared to the old days that things move so fast now that trends can come and go in even a couple of months. Its hard to completely fathom when you have grown up before the internet. 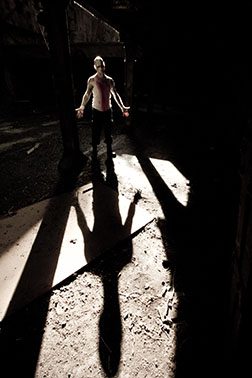 I see you are working on many projects besides Primordial nowadays. Care to share a few words about each one of them?

Ah well I’m at that age now I want to work with some other people. Primordial takes a long time between albums, Dread Sovereign is kinda my baby, evil sounding doom and Twilight O The Gods which is more traditional metal…..

What do you think about social media and the explosion of the internet those past few years? Do you believe it has somewhat spoiled the traditional way of sharing and buying music and discovering artists or that it has made things less meaningful since you can download a discography or watch a live DVD so easily on the net?

Well it surely is, it’s been well documented. Social networking has changed how we absorb information. Its also helped to destroy some elements of human interaction or certain parts of it….people can watch everything on youtube now, the live show which should be the ultimate in interaction with fans/bands is fast becoming something that younger generations are just not interested in, festival culture is killing touring, things are changing. 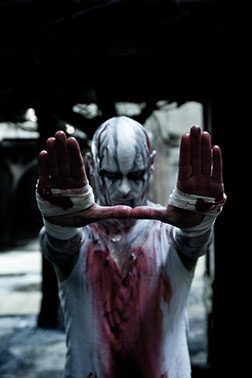 You started your career back in an era where the black metal movement was at its peak. Would you say that things back then (the shows, the fans, the music, everything) were more original and rawer and nowadays the situation has turned…. a little bit “too professional” and organized?

I don’t know really, there will always be people who understand and people who don’t. And right now in 2013 I would take Deathspell Omega over most albums from 1991.

Greece and Ireland are in the same place nowadays, savaged by the E.U and all those austerity measures. In your mind, who is responsible for this mess and what should the people do to overturn this situation?

Oh…, I could write a thesis about this, I did actually write a column and blog about it before. There are so many elements to this story. Its a complicated mixture of forced banking conglomeration of ownership, corruption, linking economies that move at a difference pace, a history of not paying taxes, religious oppression, and simple bad governance and rotten state society that doesnt work for the people. Complex.

Of course, speaking of Greece, I couldn’t leave out of the interview some questions about your upcoming shows in Athens and Thessaloniki! Only one year after your last concert and here you will be once again. Do you feel there is a special bond between Primordial and the people of Greece?

Yeah I have always felt that. We love going there, I hope it isn’t too soon, but the offer came in and we decided to go for it and bring our friends from Mael Mordha so its going to be a real Irish invasion….I hope you are ready!

I was really thrilled to know that you will be supported by fellow celtic doom metallers Mael Mordha! How did this happen? Are you friends with the guys from Mael Mordha? Were you planning an all Irish assault over Europe?

Who knows, would be cool. Yeah we know them for years. Good band and they are growing with a strong new album. Expect a powerful show!

Can we expect any surprises in the setlist for the concerts in Greece? Any songs from your older eras perhaps, unexpected covers, or songs that you rarely play live?

Well I dont know really, we played for over 3 hours last time and left little to the imagination but we are going to try and find something interesting and different….

Well Alan, thank you so much for your time and all the information you shared with us! As we finish this interview, I think it would be really great if you could share with us one of your favorite memories concerning music; anything, from a rare record you found in a record store in blind luck, to a song you listened to the radio and changed your life, a concert, meeting one of your music heroes in person, a crazy fan, you name it!

Too many really….maybe the first day I brought Iron Maiden’s debut album ‘Iron maiden’ from a record store after saving up to buy it aged about 11 or 12 and the moment I heard “Prowler” I knew this was me…