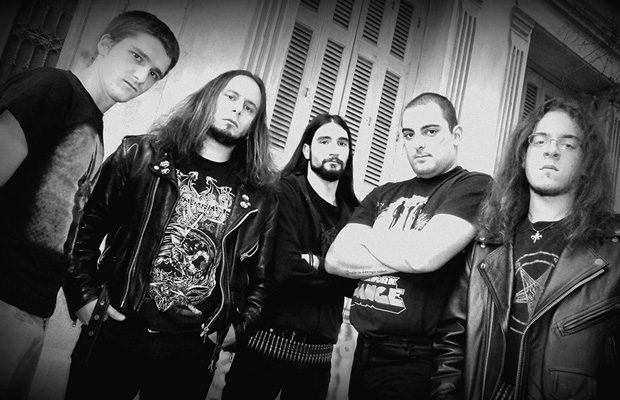 One of the black/thrash bands of a the new generation of Greek scene is Carnal Dread, being really active in terms of live shows (some arranged as we speak) and willing to work for what they love. John “Necro” Panagiotidis (drums) talked to Metalpaths about many interesting stuff concerning Carnal Dread and much more.

Hello there John! You’re a new band in the overall Thrash genre. Give us some details concerning the band. When were you formed and which were your influences.

Hello bro, Carnal Dread formed in the beggining of 2013 and our influences are Old School Thrash and Black/Thrash Metal and generally we are trying to achieve the old school style of music such as Possessed, Bathory(first albums), Infernal Majesty, Kreator, Slayer, Razor and many more…

How hard is it nowadays to find members for a Black/Thrash band? Did you as Carnal Dread have problems finding the right people?

Well, we didn’t face that problem of finding members. From the beginning we were ready and done as a formation. Nowadays i believe that if a group of people loves what they do and has a mutual target in the music they wanna play they will be ready to kill!! The only thing that matters is love and passion for metal!!

You’ve played your first couple of live shows during this summer. How did you guys feel after playing your material for the first time outside the studio?

This is the most magical moment of any band!!! We were very stressed and anxious when we were rehearsing to be ready for the lives but when we performed we felt like… this is what we wanna do, performing live full of sweat and neckbreaking!!!

What do you like the most, John? Playing live shows or recording in the studio?

Of Course playing live! When you act live you indicate your self and the style of your band and what is your real mood. Personally, in the studio recordings I only have stress and i can’t enjoy it as much as I want.

What do you think as a member of a thrash band and as a thrash metal fan of the Greek scene today? Which bands set themselves apart from the rest of them in your opinion?

Hmm, all I see in the greek thrash metal scene these days is that everyone is taking care of himself and it’s clearly obvious that the support is not genuine and many people are fuctioning in coteries. But also there are some exceptions who are trying to do the best from their hearts!! I don’t want to name bands and i believe this is unnecessary because everything can be seen!!

John, many Greek Thrash bands have reached a level of being strong support acts: Suicidal Angels under the Big 4, Kreator, Bolt Thrower etc., Exarsis under Sodom, Onslaught and Anthrax, Chronosphere under Evile and Bio-Cancer under Artillery and Xentrix in 2014 just to name a few. Which would be your dream bands to be a support act for?

Well bro, my opinion is that all the bands from the underground scene must have the opportunity to be a supporting act in a big band. Not only the same bands we see all this time, the opportunities must be for everyone!!!!! I wanna see supporting acts in big bands such as Demon Prayers, Endless Recovery, Sarcastic Obedience, Menace, Atom etc…

What are your future plans as a band? I’ve seen you’ve booked some live shows in Athens, supporting Sarcastic Obedience and Benefactor Decease.

When can your fans expect some recorded material?

I think that in the beginning of the next new year our EP Black Thrashing Rites will be ready to roll !!!

That was about it, John. Thanks a lot for your time, we wish you luck with Carnal Dread, and you may end this interview however you feel like.

Thanx a lot for your interview and it’s an honour for me when i see people like you who are spreading the word everywhere and supporting the metal scene with a true and genuine way. Crucify the so called lord, he soon shall fall to me, your souls are damned your God has fell, to slave for me eternally. Hell awaits… for more metal! Keep thrashing and none shall defy…