Hard working band with a “fuck you” attitude. Everything you could expect from a thrash   metal band. It’s a pride to have such kind of bands to represent your country in the world metal scene SUICIDAL ANGELS never stopped making us headbang like there is no tomorrow. And with their new album “Division Of Blood” I think our heads will fall off. So, I had the honor to have for a brief interrogation Nick and Gus Drax (the new guitarist). I think they endured patiently my mumbling self. Sorry guys, the rest enjoy!

Video format of the interview in Greek languange:

We are here in Zero Gravity studios with SUICIDAL ANGELS to talk about their new album and their latest news.

Well it’s your sixth album and the name of it “Division Of Blood”, would you like to give us some information about the album?

Nick: Well, I will give you the short story, because Gus barely made his way in the band, at that moment. The whole recording took place in Germany, where we are living for the past two and a half years. We entered the studio at the end of September of 2015, we had a five week window, to finish the recordings. Gus, came in the band just before the time we entered the studio and without having any idea, for the new material. As for the album itself, yes it’s our sixth release and I could say I’m greatly happy about this release, because I think is a very special album for the band’s history up ‘till now. 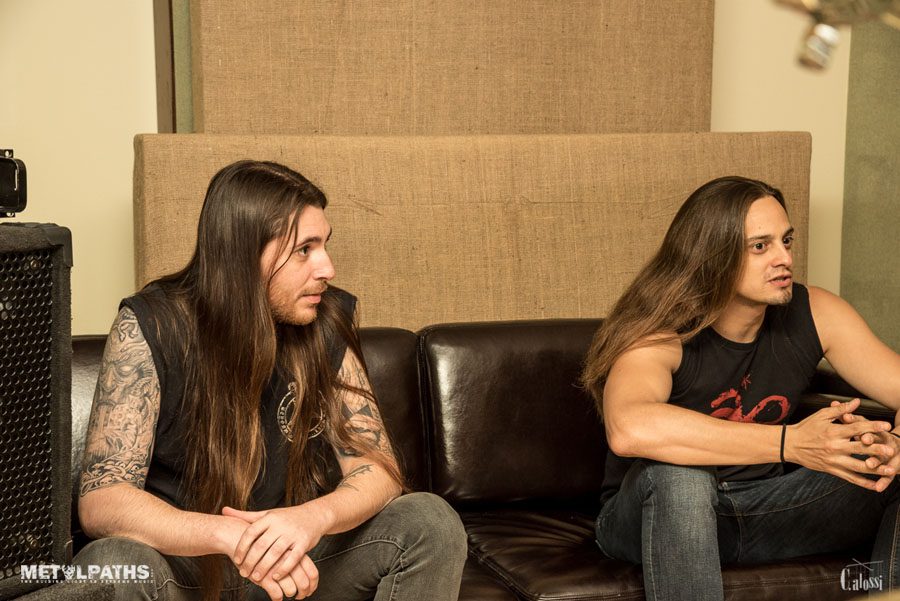 Do you think there are musical differences with your previous releases?

Nick: I could say in a more simple way that this albums reflects the whole experience we gained either small or big, it doesn’t matter, with all the releases, the tours, the band’s history and the people we’ve met so far. It has our experience in the music. Now, If you ask me what our next release will reflect, I would say I have no idea, when the time comes we will talk again.

Gus how was your entry to the band’s ranks?

Gus: Yes (laughs), everything happened really fast, because the guys didn’t have much time to look for another guitarist and because they had already booked shows in Japan. And as you can imagine, when I heard that, I was even more interested, to become the band’s new member. When they told me what was coming up next, I answered them not to talk about it further and begin working. I learned the older songs and went in the studio, to write the solos for “Division Of Blood”. When I entered the studio, they had already finished with the recording of the drums and rhythm guitars, though, I hadn’t heard anything from the new material, until the moment I got in with my guitar to record the solo parts.

Nick: I would like to say, here, that the lead guitar parts are the best they’ve ever been played in the band’s carrier, so far. From ideas, to performance playing and the communication in the studio, everything was at its best. 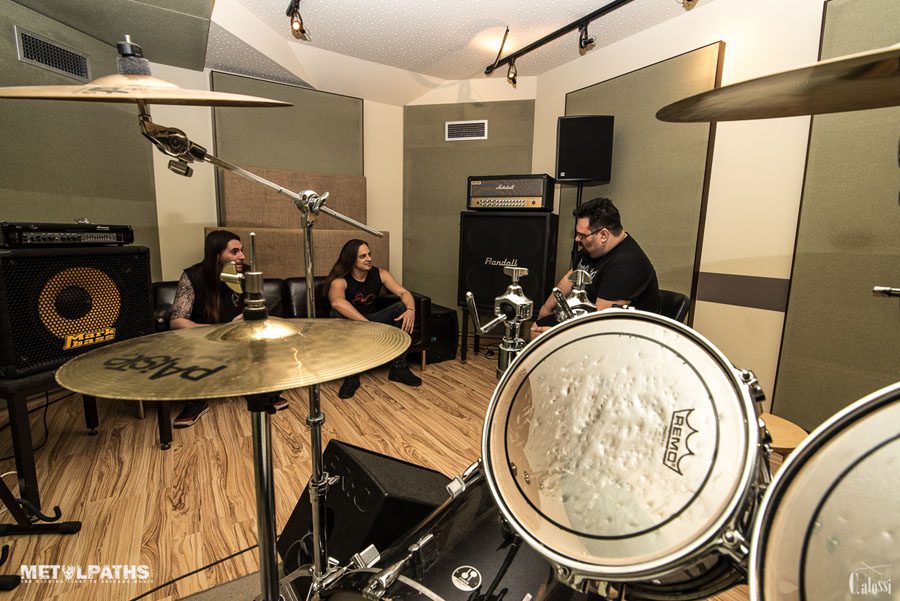 You seem quite a hard working band, releasing a new record every two years. How easy / hard is something like that? Did you ever had the idea of a break passing from your minds?

Gus: Basically, you need a break only if you do something that gets you tired or you are bored with it. For us, this is our life and dreams…

Nick: Sorry to interupt you, also is something very creative for us, everything that we do.

Gus: Yes, and we surely go to sleep very happy every night, knowing that we do these things. So, no, there is no reason for us to have a break.

And as I can imagine it comes out naturally for you…

Nick: Yes, now of course you will ask me if we can release a record every two years. The answer is no, because, if in two years we will not have music that can satisfy us, we will wait. Nobody is chasing us. I find it stupid to release an album only to have a release. To release ten songs and only the half of one song worth. Because every fan of the band, has some requirements he/she will listen the result and be very disappointed. We don’t want or like something like that to happen with our music or our fans. So, if we have songs that we like, yes, we will release the album otherwise we won’t. 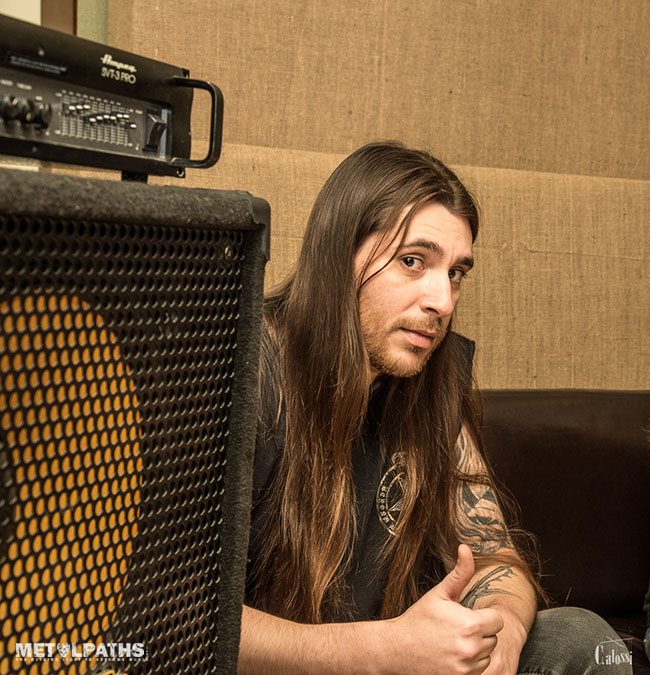 Ed Repka, once more, is responsible for the front cover of the album. Would you say that you are very satisfied with his work and concept for the album?

Nick: The best part, working with this artist, is that we simply tell him the title of the album, we might give him some information or some ideas we have and after almost a month, he sends us a draft of the cover and we’re amazed! So, we give him the green light to do it. We have never restricted him with anything, because, I think if you do something like that to an artist like Repka, that has his own way of working, you are likely to lose the magic that he will create on his own. You simply let him do whatever he wants.

The lyrics of the album, what are they referring to?

Nick: This time, the message is about war, not in the situation itself rather than what surrounds it. All those parts and situations that have happened throughout history. The conditions upon that make a war begins to take place, the traumas a war leaves behind or creates etc. 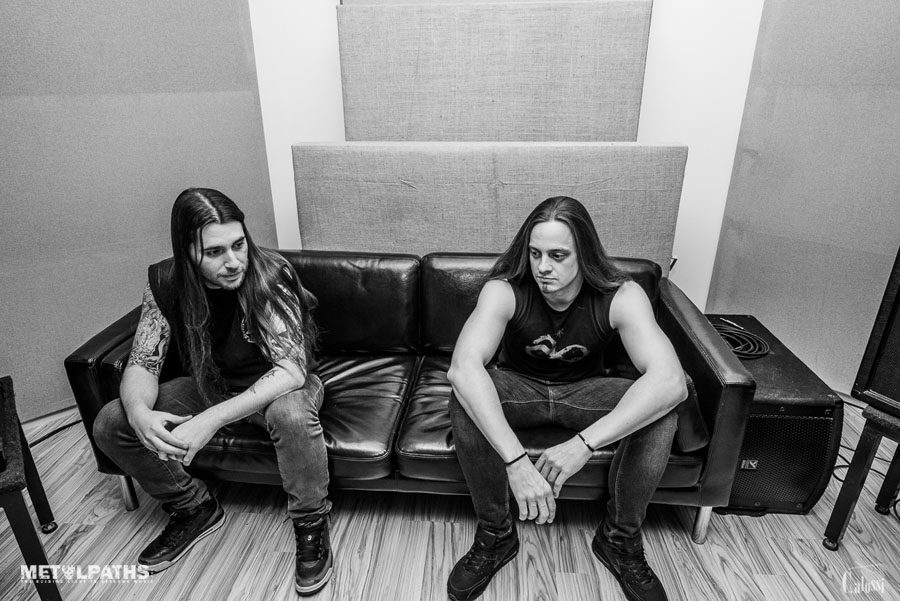 To me, the album sounds more violent and raw, but also keeping the roots of classic thrash metal. Was it something on which you focused or did it all come out naturally?

Nick: To tell you the truth, when we entered the studio, I had with me only a demo tape of the songs, just to have something to begin with. The point is, that Jorg knows the band since 2011, when he mixed “Bloodbath” and he was in the process of “Divide And Conquer”. He knows us, as people and how we play and he is an old school guy. So, he told us to do things like in the 90’s. More freely. Ok, some parts or mistakes you will fix them or play them again, but we left it as more human, as it could get. We didn’t want, for example the drums to be heard like pushing buttons programmed, but we left everybody play through the songs and we recorded whole bunch of takes and then kept the ones, we liked the most. We also tried some more analog technical staff, not digital, which gave a special feeling. With the result getting, as you said, raw and straight. 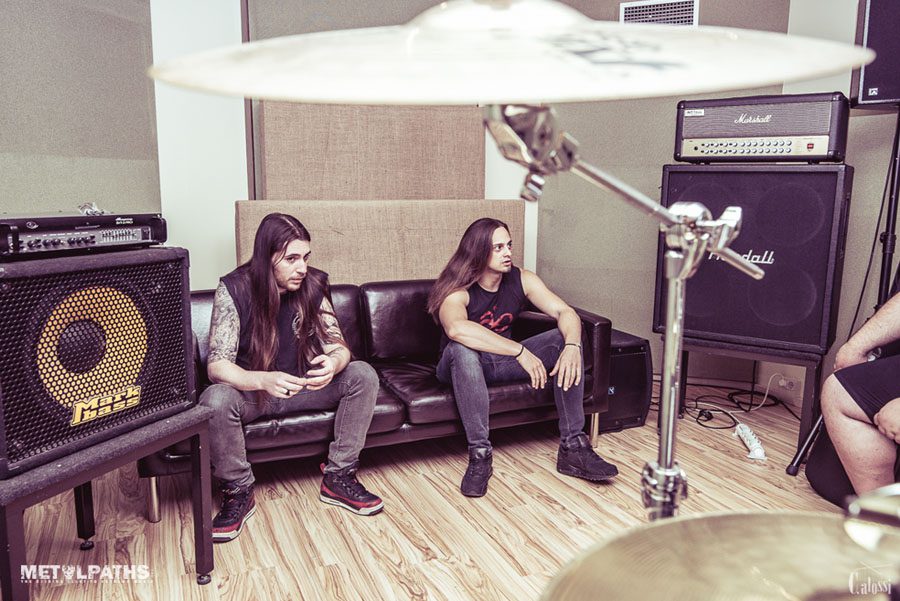 Gus, how does it feel, this whole experience for you up until now? Musically, I know that you were not on a thrash metal path, so to say.

Gus: (laughs) I don’t know why the world has this idea.

Nick: You have given the wrong impression, maybe because he is a nice guy (laughs).

Gus: Look, the truth is that I’ve never hidden my love for the progressive sound but, if you see my carrier since I was eighteen years old and the bands I’ve played with, I have a more thrash background, rather than progressive. Playing with BIOMECHANICAL, that was not the typical thrash metal band, but with a lot of thrash influences. Also with PARADOX, an old school German thrash metal band with some power influences, it wasn’t something new to me. Except may of the fact that it is something original thrash metal. For me, all this, is a very beautiful experience, I like a lot to do different things. To have new challenges to my style of playing and also I like the professionalism in this band, which was something I always wanted as a person and a musician. Because, if you don’t pursue things in a professional way, you will not accomplish much in the music industry.

Nick: Something I’d like to add, to what you are saying. When we talked with Gus, before he came in the studio, I knew I was talking to someone that is a great guitar player, but the fact that he didn’t have any contact with the new stuff, I was wondering how this could come out. The result as far his parts are concerned, is fantastic. I didn’t expect it to be that good and he didn’t think that, as well.

Gus: I had no idea of the songs, so I didn’t know what to expect. I know myself, but if you didn’t know the songs.Yes ,it was a bit tricky.

Nick: I didn’t expect such a good result, honestly. I expected a bit more progressive feeling, but it was exactly what we wanted, where we wanted it. 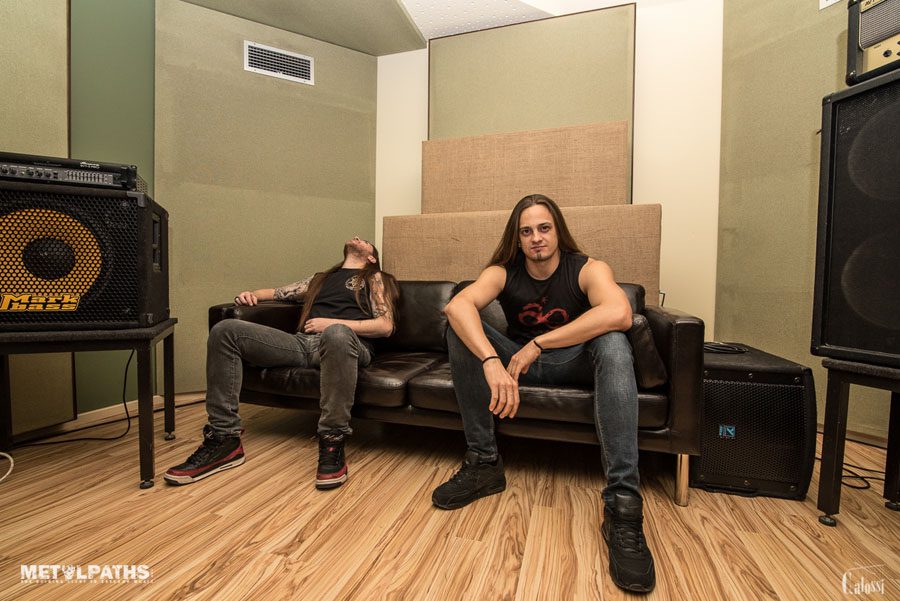 How easy it is to write a thrash metal album, under the current circumstances we are all living through this period? It comes out more raw and violent? Are you inspired by all these things and situations you are living through?

Nick: I think, there is an infinite amount of inspiration, by the circumstances around the world, in our country, in our neighborhood. You can be influenced by everything. Not only for thrash, but in any kind of heavy metal or music in general. For somebody that almost killed you with his car, to the foreign policy of the governments.

You are more than ten years as a band.

Nick: We are closing ten years from our first release.

Exactly! You’ve, surely, lived some crazy situations. Is there anything that you will remember forever?

Nick: The most extreme that has happened up to now, did happen last year, during the second headline tour, for “Divide And Conquer”. We played in France and the tour bus, was parked in a bit acclivity road. As you can imagine, the bus is heavy, it weights about twenty five tons. As the bus was parked, the air brakes were emptied and the bus crashed in the front on a pavement and the wheel was in the air. We fought with planking for some time, but they were all broke. We thought, we’ve lost the next show, but in the end, we managed to lift the wood and put it under the bus, so it came out easily. All this is video-taped on the bonus DVD of “Division Of Blood”. That was funny. For extreme situations, yes, we had plenty as does any band, that plays heavy metal and tours. If you ask them, they’ll  have some pretty stories to tell. As for us, where to begin with? From the time in Bosnia, when guns came out and we were running to hide? We have a lot of such stories to remember. 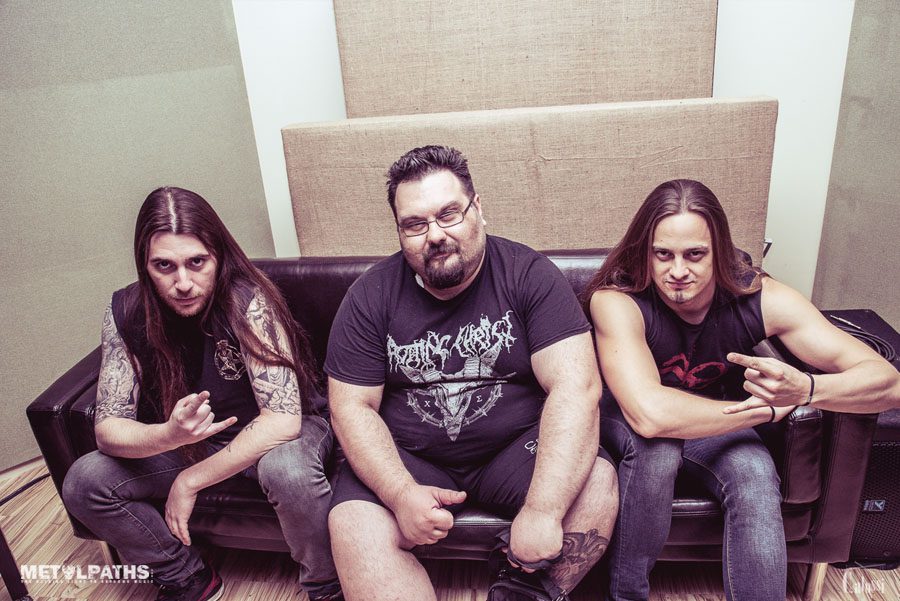 What plans you have from now on?

Nick: We’ll do some festivals during the summer. Two or three weeks before, we played in Switzerland, on a festival. We’ll visit Russia, for the first time, in September. Ukraine,Latvia again and Estonia for the first time, if I remember correctly. And a week after those shows, we begin the first part of our tour in Europe, for “Division Of Blood” with thirty-one booked shows.

Nick: Yes, there will be some shows, but I can’t give any specific details. We want to play at our country, because we haven’t done so, since 2014 and we’ve missed the Greek audience. We’ll see. We’ll soon have more information, for these shows.

I’d like to thank you for your time with Metalpaths. I wish you all the best on the upcoming tours and we wait to see you on stage here once more.

Gus: We thank you a lot.

Nick: You will have a special invitation (laughs).