[colored_box color=”yellow”]“We never aim anything when we recording an album. Things happen natural by inspiration and the spirit of a situation…”[/colored_box] 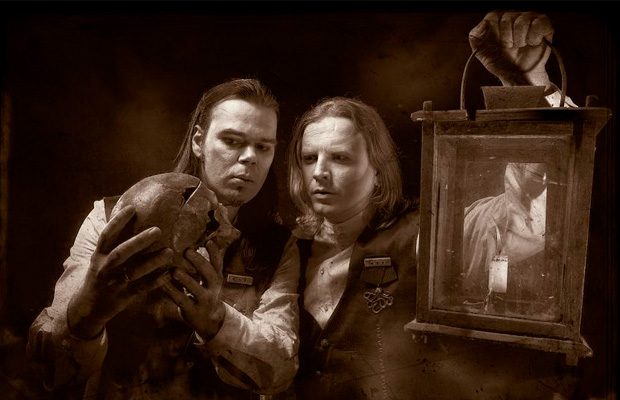 Mystical, etherial, ritualistic..the many faces of Vision Bleak! With a numerous releases and a great reputation in the scene of gothic metal, the band is now a classic act for the lovers of the above styles of music. Metalpaths webzine had the chance to chat with Konstanz just a few days before their concert in Athens, Greece, about their latest record, the tour and many more interesting stuff!

Hello Konstanz and greetings from Greece. Congratulation on the success of your latest record. Tell us about the reaction of the fans about the new record. I am informed it was a positively acceptable one. 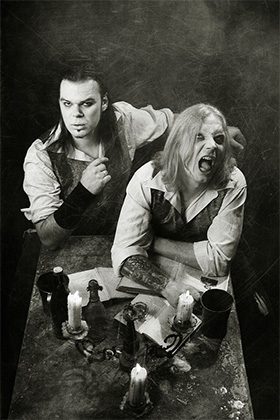 Hi and greetings from germany. Thanks for the well-meant words, Thank you!

A lot of good reactions from both sites-press and fans equally about the new album since the release.

We’re very satisfied with the reactions so far. For me it’s the best release since “Carpathia”

Inform us about the recordings of ‘Witching Hour’. Where was the album recorded and who is responsible about the production of the record?

We recorded the album in the studio of Schwadorf “Klangschmiede Studio E. All outputs of Schwadorf and me will recorded at his Studio. It’s very comfortable to work at your home base together with a friend as producer. It is almost perfect.But the reactions about the sound are not that much so I think it’s a sign that everbody is satisfied about (laughs)

While listening to ‘Witching Hour’ and in previous records of Vision Bleak, someone can easily notice the folk influences in your music and the great use of the piano and other classical instruments. Do you record all those by yourselves or do you seek help in other musicians too?

All instruments and stuff are played be us self except the yaw harf on “cannibal witch” is played by the Marcel “Skald Draugir” Dreckmann of herunar and a friend of us. On our first album we had a special CD with some orchestra versions of couple of songs played be an string-ensemble and back in the days we had some classical singers for some parts!

The new record is heavier too. Some parts of it, remind me of doom metal while others, your previous records. Did you aim for a different result for ‘Witching Hour’, something you have never achieved in your other records?

We never aim anything when we recording an album. Things happen natural by inspiration and the spirit of a situation…that’s the only way writing good music! 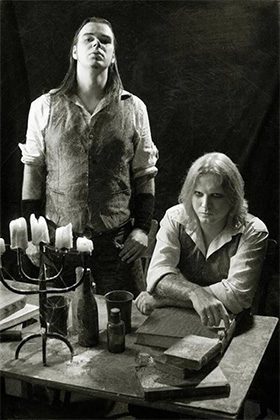 How do you react and collaborate with Schwadorf while working on new material?

First of all there is a theme most of the time written by Schwadorf. Then we come together making a rough demo and step by step the song grows up. Sometimes we losing control about a song and in the end you have some results like „The Deahship Symphony“ or „Hexenmeister“ and i really like that!

Tell us about the concept of ‘Witching Hour’. How did that come up?

Schwadorf had this idea for a long time and a really liked that idea. There is an arch type fear in every human being about witches, magic and especially for men they are afraid about women’s mind (laughs). Most of the tales about witches are written bei men and witch are almost always women….that’s the proof!

If you travelled back in time to a small village where witch hunting occurred, which side would you take? Would you save at least one….or would you burn them to the stake?

Save! because you never know for what you can use a witch at home.

How do you two get to choose the concept of your records? Do you tend to write the music first and then choose a concept based on the feelings the music, you’ve compose, create, or do you discuss the concept first?

Schwadorf and me talking about what theme we’ll use for a record. The Lyrics and the music come up hand in hand. Creating, arranging and recording is a process in whole. Just the musical themes are collected during a certain time.

You are currently on tour with Saturnus and Dordeduh. I would like you to describe your experiences from the tour till now and your partnership with the two other bands. 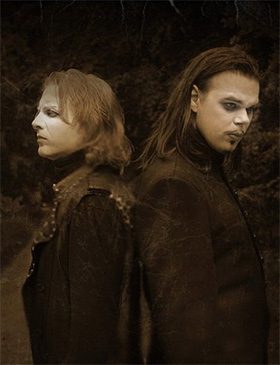 We had a good time together the guys in both and are very oroffesionell musicans and nice persons as well. We excess no stupid drunken sailors almost perfect.

You are visiting our country for the very first time. What should we expect from you for the show? You’re celebrating the ten year anniversary of your first record, so I bet you are planning something special.

Five very excited guys playing a concert unter the streets of athens.Hopefully we’re get the best support from our Greek fans but I’m sure it will become a intensive time…

Under what circumstances do you choose the bands you want to tour with? Do you prefer bands closer to your music style or do you tour with bands, in which the members are closer to you?

It is a mix of all. You can listen to the music of your supporters first but most of the time you never met the band personally. So going on tour is just an intersting expirience about human’s mind and I really like that.

What about the musicians you tour with and perform on stage? Are they different each time or are the tour musicians persons who tour with you from the beginning?

Always the same till this point. Except the drummer changed. Sebastian is the new drummer usually playing in Helrunar a german black metal band and friends as well.

Let’s get back in time and discuss the birth of Vision Bleak. When did you and Schwadorf decide that you wanted to participate in a mutual music project and what decisions led you to this band?

We are friends since more the 15 years an in 2000 we thought about a music project together. The very first steps of TVB was a demo with some gothic stuff. But our love to horror literture and films led us to the idea making music with some horror themes and that strange kind of music what is tvb playing today. 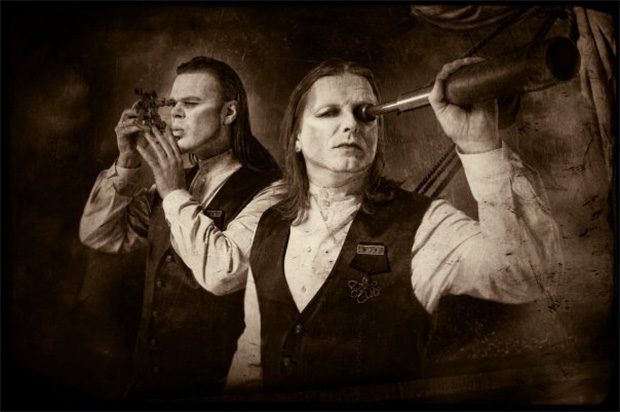 You have created your own, unique, music style, combining many different music styles. It is difficult for a band today to achieve this, because of the glut of music. Was this style something you always wanted to embrace or did this unique kind of music come upon spontaneously after a few jams?

The music in this way comes up without any plan. We never had the target to play a certain kind of music. We like to come up with music out of us and TVB is the result of both of us.

A few music magazines and webzines tend to label you under the term of ‘gothic metal’. However, in your interviews, you and Schwadorf seem to dislike this term and replace it with the term ‘horror metal’. Why?

The term“gothic” today is a bit like the term “jazz”. Behind there is a lot of good but a lot of bad music as well. So with the term “ horror metal” the are just a hand full of bands and mostly they have the same kind of style like TVB and that’s quite cool I think.

Many bands are forced to embrace a specific music style by the music label they belong to. What is your opinion about the absence in freedom for a musician?

Art in all ways has to be free first but after you decided selling your stuff you have the live with people who labeling your muic that’s part of the game and I can handle that.

Nicknames often describe the persons they belong. How did you choose yours?

Nothing, just good sounding names with a strange attitute in it! 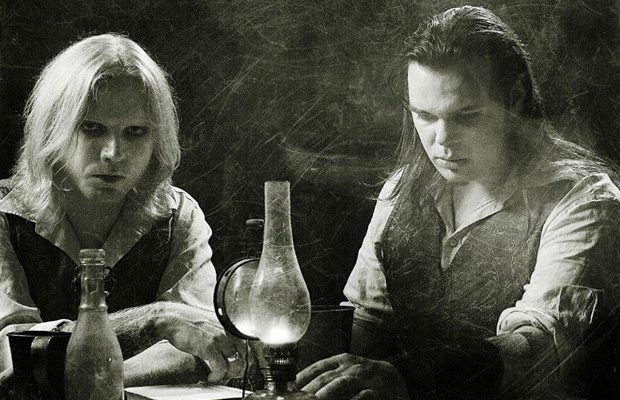 It goes hand in hand. If we have a favorite movie or book after we engaged us with a certain theme we bring it to the music of TVB except love movies. All the old horror movies are a source of inspiration and I watch the classical movies over end over again. The new stuff is just a remake of the old ones, boring… Curently I’m busy with some classical music and we will see maybe the next TVB will have more orchetra stuff on the next record.

Your photo shootings, your stage performance, as well as the emotions your music creates, gives us the impression that you and Schwadorf could be two dark and mysterious figures, maybe described in a nightmarish novel of Edgar Alan Poe or in a fairytale by the Grimm brothers. Are you alike the previous description in your everyday life too?

I like it very much. When someone is descriping TVB in that way it’s welcome!

Let’s get back to Vision Bleak. I would like you to inform us about the future of the band. Are you planning a new tour or a new record?

In 2014 we will bring the firt record “the deathship has a new captain” on stage as a special anniversary show! Many things to do!

Last but not least, a message for the fans!

Hope to see you at our very first show in Athens! Bring all the ghouls to the party and have a haunting entertained night with TVB! Hats off, Konstanz and the deathship crew