Gothenburg melodic death metal: a legendary scene consisting of the great At The Gates, Dark Tranquillity and of course In Flames! The most melodic of the 3 and the most experimental ones with a record such as “Reroute To Remain”, In Flames never ceased to make classic or at least really good records filled with beautiful melodies and the strong emotional voice of Anders Friden. Metalpaths.com had the chance to talk with the bands bassist Peter Iwers, about their new album “Siren Charms”, the swedish melodic death metal scene and other issues concerning the band and much more…

Good afternoon Peter! Your new album “Siren Charms” has just been released, and has already been said to be one of your most experimental albums to date, an opinion I seem to agree on. What do you think now that it’s done?

What I’ve noticed by listening to the new album is that you had the Swedish soprano Emilia Feldt sing in “When The World Explodes”, something that happened for the first time on the “Come Clarity” record of 2006 with Lisa Miskovsky on the song “Dead End”. How did it occur to collaborate with a female vocalist? Are you willing to expand that experiment in the future? 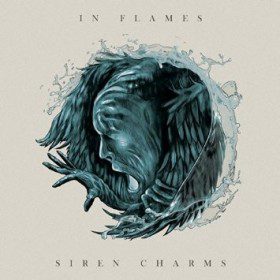 No I don’t think so, it’s only a one-off for each record. I mean we played a couple of shows with Lisa and we’re willing to do so with Emilia, but it will be just special shows. We won’t have her on a full tour. It actually was kinda funny how it happened, because the only person who knew about it was Anders. So when we left the studio, the song was recorded with his vocals. So when we were waiting to get the mixes one by one, me and Bjorn were sitting in my car, you know, cranking it up the car stereo and all of a sudden there’s a lady singing and we’re like “Dude, what the hell?”. We were really shocked in the beginning but it turned out really well. It was that we did not expect it like “Woah”. So what happened was that Anders wasn’t pleased with his vocals. He felt something was missing, so his producer came up with the idea. But it came out pretty good, the contrast with Anders’ vocals.

Where would you spot the differences between this record and the “Sounds Of A Playground Fading” record? 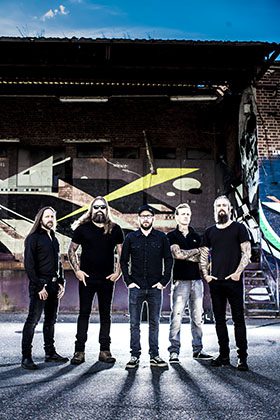 Well I think obviously this is a darker record, it’s more experimental like you said. At the same time, it’s not like we’re going to the studio and go “let’s do this differently, let’s try it this way”. For us it has always been a matter of evolving in between each record. trying to do something that we’ve never done before. And I guess you know being down in Hansa studio being influenced by just being there in this legendary studio affected a lot of the outcome of the songs as well, even though a lot of it was written before. I think the biggest difference is that Anders added a lot more clean vocals in this record. Because if you break it down you have the melodies the aggression the hooks the choruses and all that stuff but eventually this is the record where he sings clean more than ever before. Mainly due to the fact that he’s getting better at it I’m sure.

Every time a new In Flames record is written, is there a predefined process that takes place? Is the final result a result of team work or following the initial dream of an individual within the band?

I think it’s a little mix of everything. There is a vision obviously, Bjorn writes all the riffs and we put it together as a band. Anders writes down all his lyrics and he records. On this one he was on a different level in the studio complexity so as soon as he was done, he kinda came up and said “Oh this is what I’ve done. Did you like it” and stuff like that. And I think he had a vision, we had a vision, but I don’t believe it was really outspoken, I don’t think that anyone had a vision we really knew about ourselves. It was kind of subconsciously I’d say, but at the same time the whole project, the whole experiment of being in the studio. You’ve got a bunch of riffs, a bunch of ideas and you have some songs left undone and that’s the whole experiment that’s the beauty of being in the studio, not really knowing exactly what you’re going to come up with, other than that you will be pleased obviously, so we keep working and recording until we have created a killer album. So we don’t go in the studio with 11 finished songs. It’s writing itself at the same time as we’re recording it.

Peter, this band was never idle for the past 15 years. Since 1999’s “Colony” we have an average of 2-3 years waiting for a new record from you guys. Do you think that this is the proper way for In Flames to work?

I don’t know. I guess it just comes very natural, because when we have a record out we’re used to go on tour, you know around 2-3 years, and when we’re done we head to the studio. We haven’t been one of those bands that take those long breaks inbetween records, and I think that’s mainly due to hard work. We tour we make records and we tour again. We actually did have a break now but only after the record was done, and we were waiting for it to come out. Other than that we’ve been working straight since 97. So I guess that’s the only way we know how to work, to complete the cycle with a new record. 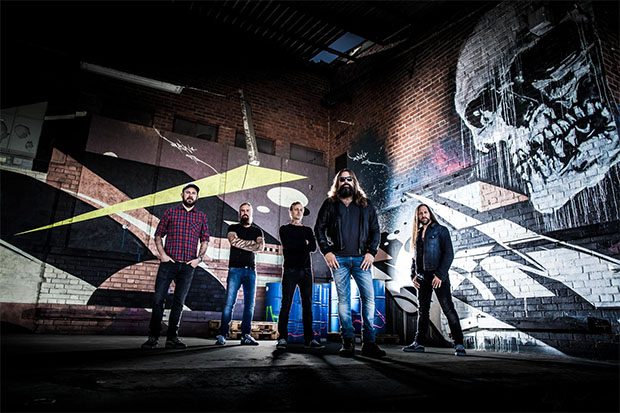 Speaking of working bands, I think we should talk about your Gotherburg comrades Bjorler brothers behind The Haunted and the mighty At The Gates. On their most productive year releasing The Haunted’s “Exit Wounds” (which sounds absolutely killer) and “At War With Reality” coming at late October which is highly anticipated! As part of the big 3 of Swedish melodic death metal, what are your thoughts on that big return?

I think it’s a great thing, I know they started touring a couple of years a sort of a reunion tour. They kept doing it because they had fun you know. I had a talk with them and that’s why they kept doing it, cause they had so much fun. Everybody has different projects, jobs and stuff like that, and that comes first, but they do the tour strictly to have fun playing again. I think it’s a great thing, they’re close friends of mine, so when they’re happy I’m happy, and I know they are they seem to get along really great. 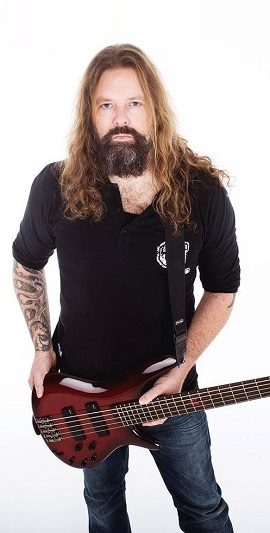 What do you think of the melodic death metal scene today? Which bands set themselves apart from the rest of them?

I never really categorized the music I listen into different sub-genres. But I mean if you break it down you’ve got Dark Tranquillity who’ve just put out a great record, you’ve got At The Gates who’ll put out a really good record. In America you have Killswitch Engage who put out a great record and Mastodon, obviously they’re not melodic death metal but they still put out a great record. There are so many good bands who are considered to be part of the melodic death metal scene. I believe everybody starts to get older and wiser making records that they feel comfortable with and that’s really good, I love it. You’ve got a band like Unearth as well they’re pretty good. I mean there are a lot of good bands.

Is there something you’d like to achieve and haven’t achieved yet?

There are always places I’d like to go to and bands I’d like to tour with, but I’m very happy with the life that I’ve lead so far. And what we’ve done with In Flames is way more than what I would be able to be part of, I’m very very happy. But when you do stuff you dreamed of and you’ve actually achieved them, you realize that you have another dreams and another goals and I think that’s what keeps us all going; the hunger to make music, travel the world and keep on finding new goals and work towards them. There are a lot of them and being able to do this after such a long time is a goal achieved itself. 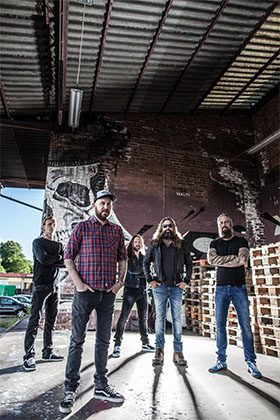 From the many tours you’ve made all around the world, which are your favorite bands to tour with?

Slayer, Dark Tranquillity, As I Lay Dying we’re gonna tour with their new band Wovenwar, I really love these guys, you’ve got the DevilDriver guys, Mastodon, Iron Maiden you know there’s so many bands we got to know. Trivium of course is one the bands we became close friends with. That’s the cool thing about touring, you make so many friends on different parts of the world that you would have never met otherwise, and it’s really nice to keep in touch and talk with all the social media such as Skype. I guess my favorite tour was 2002 Slayer and Soufly. It was our first US tour and they took really good care of us. Marcello, Roy and Mike R. got us under their wings and taught us how it should be in this business, you help each other, it doesn’t matter who’s headlining, we’re doing all of this together as a family. To this day we’re still the best of friends. And I think they really showed us how to do it they went later than us, they had better songs than us, but they were really cool about it. This is how it should be in this business you should help each other. Kerry King from Slayer, invited me to his dressing room and we became really good friends because he’s such a nice guy.

Peter you’ve played with In Flames only once 14 years ago @ Rockwave festival 2000. What are your memories from that show?

I remember Dream Theater was playing and the crowd was really really big and crazy, we had a great time every time we’ve been there. I regret that we’ve never been able to play there again. We’ve been there on location when festivals got cancelled (editors note: X-fest 2006 w/ Hatebreed and Dio) and one more I can’t remember the name (editors note: due to utter shame of that 2004 “festival”, I stopped him from recalling the event). I really regret we’ve never played there and I hope that we will soon. I go to Greece every year on vacation with my family cause I love the country. 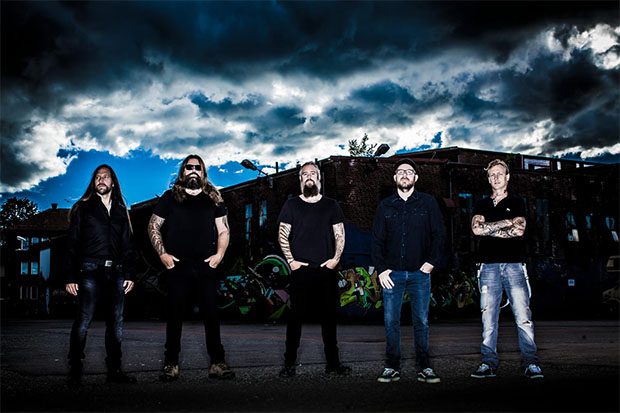 Will the tours be including Greece on any leg?

No, no, not on this one unfortunately. I don’t know what it is, we want to go our managers want to book us but it just seems that it’s never ever working so far. We’re working really hard on this leg so I’m hoping next year.

What are the future plans for In Flames?

We’re gonna start touring in the end of September and work our way up in Europe, Japan, Australia maybe and then to the US. And then we’ll keep touring hopefully throughout 2015 – 2016. After that we’ll have to wait for another record.

That was about it Peter, thanks a lot for your time it’s been a huge honour. The final words are yours.

Thank you, everybody in Greece for sticking by In Flames after all these years. I apologize that we’ve never been able to come back and play for you, I really hope we’ll make it in 2015. I love you all, thank you so much!