Dutch symphonic metallers EPICA recently filmed a video for the song “Unleashed” at a location near Berlin, Germany. The band’s record label, Nuclear Blast, says in a press release, “After 18 hours of shooting, the director called it a day. There were many different sceneries and the guys and girl even had to act! What the story behind is about… we will tell you soon! Expect the unexpected.”

A photo from the video shoot can be viewed below.

“Unleashed” comes off EPICA’s new album, “Design Your Universe”, which is due in Europe on October 16 . The follow-up to 2007’s “The Divine Conspiracy” was recorded at Gate Studio in Wolfsburg, Germany with producer Sascha Paeth. 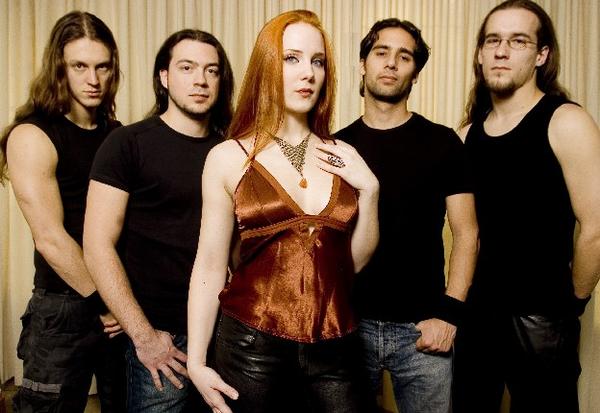 The cover artwork for “Design Your Universe” can be viewed below (artwork by Stefan Heilemann).

Commented EPICA guitarist Mark Jansen: “It’s been a great time at Gate Studio in Wolfsburg recording ‘Design Your Universe’. We worked with the same team and we worked for the first time together with our new guitar player Isaac Delahaye [formerly of GOD DETHRONED]. This made a difference and made things very refreshing because we could add some new elements because of him. We have worked harder than ever on the details. We preferred to spend some extra money on great additions which brings our songs to a higher level instead of leaving things like they are. The result is that we worked so hard on this album that we hardly can listen to the album anymore. Now it’s time to let it go and release it to humanity. We were already very happy with ‘The Divine Conspiracy’, but I’m sure this new album tops that one.”

He added, “The album title, ‘Design Your Universe’, deals with new breakthroughs in quantum physics. It proves that we are all connected to each other on subatomic level. Also, it shows that we can create or at least influence matter with our thoughts… a very interesting fact. Because it changes everything for us, our whole worldview collapses once you accept these facts and integrate them in your lives. So this had to become the new album title.”

EPICA will return to North America for a headlining tour in the beginning of 2010, with DAATH and BLACKGUARD as support. EPICA will offer fans a special VIP ticket which will grant them access to the venue an hour before door times, a pre-show meet-and-greet with EPICA and a event poster customized for the city of the show. Fans are urged to purchase these VIP tickets as only 50 are being allotted for each show.

EPICA released a double live CD, titled “The Classical Conspiracy”, on May 8 through Nuclear Blast Records. The album was recorded in Miskolc, Hungary, on June 14 2008 during the Miskolc International Opera Festival. The band performed a 45-minute set of metal adaptations of classical songs and movie soundtracks, accompanied by the orchestra and choir as well as symphonic versions of its own songs (including a few orchestral songs from singles and “The Score”, which had never been played live before).