Steve Wildsmith of The Daily Times recently conducted an interview with LACUNA COIL frontwoman Cristina Scabbia. A a couple of excerpts from the chat follow below. 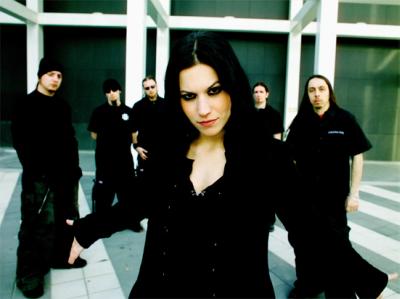 On her image in magazine covers and publicity photos and on the stage:

“Women are beautiful just in general, and no matter what, other guys and humans will always be looking at the sexy part and the feminine part of me. As long as I use that image in a sexy way and not a vulgar way, I’m fine with it. People who know me know that I’m completely different than how you see me in pictures. …

“They have no idea how I am in real life — I don’t wear makeup, and I don’t dress the way I do on stage. I smile about that, and I’m pleased and flattered, but I have my own private life.”

On the band’s new album, “Shallow Life”, which moved more toward straight-ahead rock:

“We didn’t want to repeat ourselves over and over. It’s not like we don’t like what we did in the past, but we did it already. For the new album, we didn’t want to do ‘Karmacode Part 2’, so we went with a different producer who would bring something new to the table.

“I think this album is a good rock album. There are still some melancholy parts — call them ‘goth parts,’ if you want to — but at the same time, I think we added a lot more to the table. The songs are tight, and the lyrics are more direct than ever. There’s a lot more power coming out of the album, in my opinion.”

“I’ve always hated descriptions of music — people say, ‘I like this band because they’re really metal,’ or, ‘I like this band because they’re really rock.’ To me, I don’t care. If I listen to the music and it gives me chills, then I like it. I can like classical music to relax, and I can like rock music to get some energy. Why get stuck on just one kind of music?

“Honestly — on my iPod, you will find everything from Beethoven to LAMB OF GOD. I have no problem listening to different styles, because at the same time, I can never listen to the same style over and over and over. Music is so different nowadays and can be confusing, but if you take that in terms of, ‘I like this band and the music they make,’ then it’s fine.

“Who cares about names? If I like the band, that’s it. That’s all that matters.”

Read more from The Daily Times.