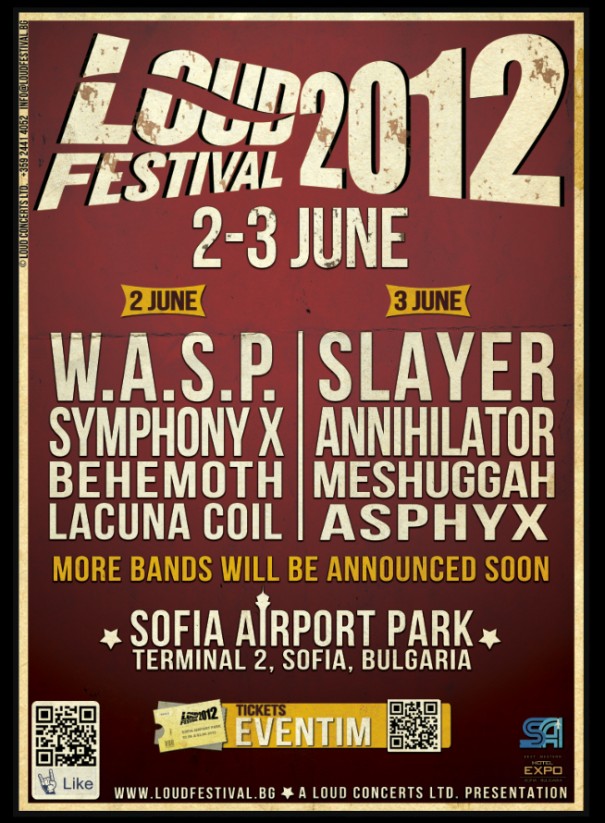 The neighbor country surprises us constantly with its live shows and festivals. This year was the first Loud Festival in the capital of Bulgaria and it was a great opportunity to watch metal bands that never or rarely come to Greece. The fact that Sofia is closer to Thessaloniki, than Athens, the very low prices and of course the line-up, made the trip there irresistible. The festival area was just beside the Bulgarian airport, so it wasn’t too difficult to find it and the access was easy for the people. The gig took place into an extensive grass field (easily 4-5 thousand people were fitting there), a well protected area, from wind or anything else (besides, I hadn’t heard something about any thefts), the bands were just on time and the fact that the festival was near the airport and there were many flights, the planes didn’t affect the live shows. On the negative side, for some bands the sound wasn’t very good, especially the first ones, it needed too much time for sound-check to be complete (around 20-25 minutes) and the organizers didn’t foresee the mud problems, so with a little rain the front lines became a big puddle. But leave all these aside. Besides, you’re metal fans and nothing can stop you.

Loud Festival begun on Saturday, and the first band that opened this metal weekend, was Tristania. Surprisingly, the Norwegians made a very powerful opening; and I say surprisingly because it was the first time that I saw them. In 45 minutes, they managed to warm up, somehow, the Bulgarians with a 7 song setlist. First song in Loud Festival was “Year Of The Rat” from the latest Tristania album. They made a big jump to their second album with a great performance of “Beyond The Veil” and around then, the crowd and specifically the fans of old good Tristania started to get really hot. The atmosphere became a little catatonic with “Down” and even more depressive with “Shadowman”, ’till the band’s return to older stuff with “The Shinning Path” and “Tender Trip On Earth”. Tristania closed their set with another “Rubicon” track, “Exile”. From what I saw I can tell that they were very good into older stuff without lacking in anything, but the tracks from the latest album didn’t make sp much impression, at least to me.

The gothic metal fans should be very happy, because Lacuna Coil, were next. As it was expected, they played many songs from “Dark Adrenaline”, so “I Don’t Believe Into Tomorrow” was the first song for them. They had a very intense stage appearance (besides, Christina Scabbia draws easily all the eyes on herself). Next, was “I won’t Tell You” before the Italians returned again to “Dark Adrenaline” with “Kill The Light”. After that, it was time for some really great old songs to rouse the crowd. Firstly, the keyboards started with “Heaven’s A Lie”, during which Scabbia was really deified. Want some more old stuff? Two songs from “Karmacode” followed, “Our Truth” and “In Visible Light” with the two singers being more and more energetic and the people more and more lively. This travel to the past ended with “Swamped” before Lacuna Coil closed their one hour appearance with “Trip The Darkness” from their new album and “Spellbound” from “Shallow Life”.

Now, it is time for some serious shit. Behemoth showed up around 19:35 to break the excessive mainstream music of the first day. I have seen them two more times and they never disappointed me, so, neither the third time did, even if it was the first time after Nergal’s recovery. A crushing beginning came with “Ov Fire And The Void” and with “Demigod”, immediate and endless headbanging. But nothing prepared us for the rest. The fucking beasts played “Moonspell Rites”! For Satan’s sake, motherfuckers, they played a song from “And The Forests Dream Eternally” EP! Every black metal fan there should have jizzed in his pants. I simply can’t explain my feelings then… But of course we were asking for some more. What about some “Conquer All” for extra mosh pits? Personally, I started to loose my head off after “The Thousand Plagues I Witness” from “Pandemonic Incantations”. From that point, Behemoth returned to their newer songs with “Alas, Lord Is Upon Me”, “The Seed Ov I” and “At The Left Hand Ov God” ’till they closed temporarily with the sick masterpiece “Slaves Shall Serve”. Do you think that they simply ended then? They returned for the knock out, because there were a few survivors left. First strike: “Chants For Eschaton 2000”, Second strike: “23 (The Youth Manifesto)”, Third strike: “Lucifer”. One hour and ten minutes wasn’t of course enough for such a big band, but it was a festival and I had to deal with it. Just pure black/death metal nothing more, nothing less. They came, they conquered (all), and they left gloriously.

It was past 9 o’clock and I sat to see Symphony X out of curiosity, ’cause I’ve heard very good things about them. And they were true. The Americans did an honest and dignified appearance on the stage. Maybe they weren’t the band that would make the people go crazy with their extreme stage appearance or fancy things, but they stayed solid on the stage and offered a pleasant progressive power metal music. It was something more than expected to play many songs from “Iconoclast” (5 tracks specifically, the half of their setlist). So, the homonym song, with its dizzy melodies, was their introduction to the Bulgarian people, and then they played in a row “The End Of Innocence”, “Dehumanized”, “Electric Messiah” and “When All Is Lost”. Although I’m not so much exited about this genre I stayed for more Symphony X, because these guys were really good and respectable compared with the headlining band. Let’s remain in their appearance now, the band goes back in 2002 with “Inferno (Unleash The Fire)” with Russel Allen giving a true recital with his great vocals. But their fanatics rose too much with “Of Sins And Shadows” from their best album in my opinion. And now their highlights. Symphony X’s show ended with three songs of “Paradise Lost” record. The fast-paced “Eve Of Seduction” was a sudden wake up for me, ’till they played one of their greatest hits, “Serpent’s Kiss”. Finally, after 80 minutes they closed their first show in Bulgaria, with another one of their classic pieces, “Set The World On Fire”. I have to say that it was the only song that I started headbanging to and I could distinguish a little rumpus in the front lines.

And now let’s go to the worst band of the festival, in my opinion. W.A.S.P. are the living fossil of a distant era, and they keep playing in live shows, despite the fact that Blackie can’t sing any more. I can’ say that they hadn’t a big stage appearance; besides, that’s the spirit of hair, glam or what the hell is this genre. A lot of video walls and lights were on the stage. They were a successful commercial movement by the organizers to attract people and they did it, because they were 3 or 4 thousand people, roughly calculating, during their show. W.A.S.P. begun with “On Your Knees” and they continued with “The Real Me”. The crowd went mad with “L.O.V.E. Machine”, but I preferred to focus on the extremely high consummation of beer. Another dynamite song was “Crazy” and their fans seemed to have create a big party, In “Wildchild” and a medley of “Hellion/I Don’t Need No Doctor/Scream Until You Like It” this party was even bigger. Then it was time for some broken dreams with “The Idol”, but I was already insensitive due to the beer and the fact that Behemoth were killing us 4 hours before. Next on the list was “Babylon’s Burning”, where also the fans seemed to enjoy W.A.S.P., but it was “I Wanna Be Somebody” that created panic in the crowd. And then I thought that they were over, but they returned for an encore. Too bad for me, too good for their fans. Chainsaws started to be heard, so all the people understood that the next song would be “Chainsaw Charlie (Murders in the New Morgue)”. Another ballad for the audience, “Heaven’s Hung In Black” and for last song they offered “Blind In Texas” with the fans being more exited. I enjoyed them so much, that I preferred to be drunk rather to watch the gig and I bet my guitar that for many of their songs they used playback in the vocals. Well, if you want an objective report for glam metal bands, simply don’t read any reports from black or death metal fans like me. It was time for rest, because for me the big day would be the next one.