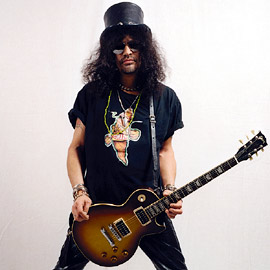 On March 8, STATE LINE EMPIRE will release “Drive Me”, the anticipated single featuring legendary guitarist Slash. As the winners of Guitar Center’s Your Next Record with Slash, the groundbreaking unsigned artist discovery program, the San Mateo outfit recorded a four-song EP with iconic producer Mike Clink (GUNS N’ ROSES, MÖTLEY CRÜE, MEGADETH) with Slash performing on the aforementioned track. Recorded at The Village and East West Studios in Hollywood, the single will be featured in the iTunes rock section and distributed by TuneCore.

“Guitar Center and I were looking for a great new rock band that hasn’t been able to get a foot in the door otherwise. With STATE LINE EMPIRE, we found that, and this song is very representative of the band,” said Slash “It’s got a great hook. It’s catchy, simple, and not too long — and it just rocks.”

“I thought this was a great opportunity to give someone a leg up in the business,” said Clink. “For this band to be managed by a great company, to have the support of Guitar Center, to have Slash play on the record, and to have my involvement as well — it’s as if you’re getting a major label deal.”

STATE LINE EMPIRE formed in 2009 and after a whirlwind first few months of songwriting, Tyson Yen, Dave Pearl, Cat and Jay Michaelis found that an exciting chemistry had emerged and the band was born. Their EP titled “Octane” will also be available on iTunes on March 8.

“The whole experience has been amazing. At the time that I got the phone call from Slash telling us that we won, I kinda didn’t believe it,” said Dave Pearl, bassist for STATE LINE EMPIRE. “This is a dream come true.”

Launched with Slash in February 2010, Guitar Center Presents Your Next Record is a first-of-its-kind unsigned band competition. Since this unprecedented collaboration with Slash and STATE LINE EMPIRE, the program has also featured the acclaimed singer/songwriter Keith Urban, who hand-selected Texas’ Brandon Green to head to the studio with producer Dan Huff in May and open for Urban on his upcoming tour. In March, Guitar Center and Travis Barker joined forces for the third iteration of Your Next Record, giving another group of aspiring artists a chance to record with an acclaimed artist, exposing their music to the masses.