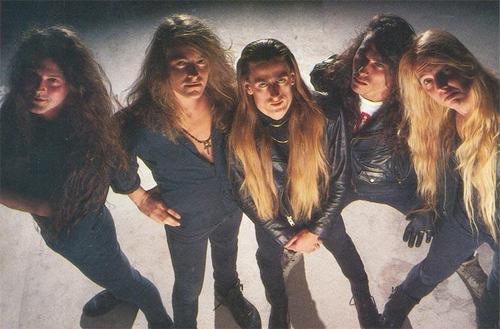 Some time years ago in a distant land… Somehow like that begin the legends, so should also start a text talking about Sanctuary.

Created in 1985 in Seattle and managed to become big with two landmark albums for power metal, ”Refuge Denied” (produced by Dave Mustaine of Megadeth) and ”Into The Mirror Black”, before falling victims of the grunge wave. ”Into The Mirror Black” got in the Billboard charts of 2010, twenty full years after its release, having sold over 450.000 copies.

Unfortunately grunge was what split Sanctuary up in 1991. But from their ashes, Nevermore were born, which not only continued the work of the aforementioned, but also created an interest for Sanctuary to the young audience who hadn’t caught them up in the beginning of their career.

Fortunately the love of the metal world for Sanctuary lead to the reformation of the group. In 2010 the news that Sanctuary reunite make the musical forums through the planet get on fire.

And twenty one years after their first appearance in Athens, together with Fates Warning in Cine Angela, Sanctuary return to another venue with cinematic history, Gagarin 205 Live Music Space.

So prepare, either you are ”Battle Angels”, either ”Soldiers Of Steel”, because Warrel and his company may talk in ”Future Tense” but they promise ”Seasons Of Destruction” !

The tickets presale for the Athens show starts on the 1st of August.