Blitzkrieg Frontman On How His Band Inspired Metallica 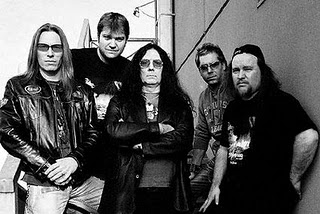 Vocalist Brian Ross of NWOBHM legends BLITZKRIEG spoke to the Sunday Sun about his band’s influence on METALLICA.

BLITZKRIEG’s self-titled song “Blitzkrieg” was covered by METALLICA on the “Creeping Death” EP. METALLICA’s drummer, Lars Ulrich, commented that BLITZKRIEG was one of his band’s main musical inspirations, along with DIAMOND HEAD.

Brian, lead singer and only remaining founding member of BLITZKRIEG, said: “Lars Ulrich phoned me up and asked if they could cover the song.

“METALLICA were, and still are, big fans of the band. We have met up with them a few times over the years and I am really pleased that they still play ‘Blitzkrieg’ at gigs.”

Brian said that he tried to give the then-unknown METALLICA a helping hand in the early 1980s.

“They sent me their demo when they were still unsigned, asking for my help to get them on our label,” he said. “But the label turned them down, saying they’d never go anywhere.

“I met up with the guy who made that call a few years ago and he says it is the biggest mistake of his life.”