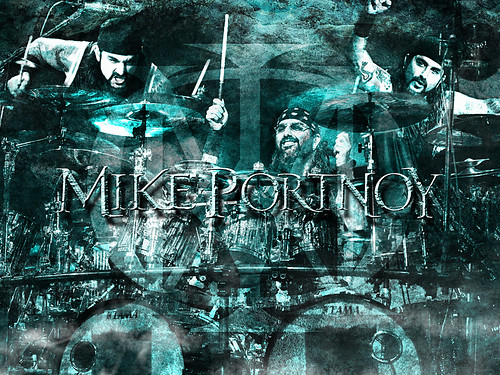 The self-titled debut EP from ADRENALINE MOB — the new band featuring Mike Portnoy, SYMPHONY X frontman Russell Allen, guitar virtuoso Mike Orlando (SONIC STOMP), bassist Paul DiLeo and STUCK MOJO/FOZZY axeman Rich Ward — sold 1,800 copies in its first week of release. The CD landed at position No. 13 on the Top New Artist Albums (Heatseekers) chart, which lists the best-selling albums by new and developing artists, defined as those who have never appeared in the Top 100 of The Billboard 200.

“Adrenaline Mob” is available via iTunes and is being sold in physical form at the group’s shows and online store. Self-produced by the band, the effort features four original tracks as well as a blistering cover of the Ronnie James Dio-era BLACK SABBATH classic “The Mob Rules”. From the opening riff of “Psychosane” through the over-six-minute epic-sounding “Hit The Wall”, it is clear that ADRENALINE MOB are in class all their own as musicians.

“Releasing the EP gives fans around the world a chance to get a taste of the MOB NOW without having to wait until the full-length album comes out at the beginning of next year,” Portnoy said.

The EP is now available for streaming in its entirety using the player below.

ADRENALINE MOB’s first-ever headline tour runs through mid-September. The trek will make stops in various markets, including Chicago, Denver and San Francisco. ADRENALINE MOB has also been tapped to open for GODSMACK on select dates of the Massachusetts act’s headlining tour.

ADRENALINE MOB formed in early 2011 when Orlando approached Allen with some material the guitarist had written. Allen and Orlando refined those ideas, at which time Allen reached out to longtime friend Portnoy to see if he had any interest in playing with them. Portnoy jumped on board and soon thereafter DiLeo and Ward were recruited to join the family. From the very first note, the chemistry was apparent and the beast that is known as ADRENALINE MOB was born.