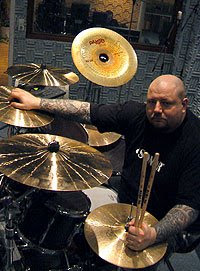 Hectic Case conducted an interview with Nick Barker (LOCK UP, CRADLE OF FILTH, DIMMU BORGIR) after the BENEDICTION concert at the Eisenwahn Festival, not far from Frankfurt, Germany, on July 29. He speaks about the death of guitar player Jesse Pintado (NAPALM DEATH, LOCK UP); the reformation of BENEDICTION thanks to the invitation of the Damnation Festival; how he managed to make his child dream come true; as well his experience with both CRADLE OF FILTH and DIMMU BORGIR.

LOCK UP will play three U.K. shows in December in support of its new album, “Necropolis Transparent”, out now on Nuclear Blast Records. Support on the dates will come from THE ROTTED and DRIPBACK.

“Necropolis Transparent” was released in North America on July 12 via Nuclear Blast Records. The CD was recorded in November-December 2010 at HVR Studios in Ipswich, United Kingdom and was mixed in January.

Originally formed by Shane Embury (NAPALM DEATH, VENOMOUS CONCEPT), Nick Barker (ex-CRADLE OF FILTH, DIMMU BORGIR) and Jesse Pintado (NAPALM DEATH, TERRORIZER) to blast out the most caustic, skin-flaying brand of deathgrind, LOCK UP was joined by the raw throat of Peter Tägtgren (HYPOCRISY) for its debut album, 1999’s fearsome “Pleasure Pave Sewers”, and Tomas Lindberg (AT THE GATES, DISFEAR) for 2002’s “Hate Breeds Suffering”, touring Japan and then falling into inactivity.

Now joined by guitarist Anton Reisenegger (Chile’s PENTAGRAM, CRIMINAL) in place of the late Jesse Pintado, LOCK UP is back in the most uncompromising style possible.