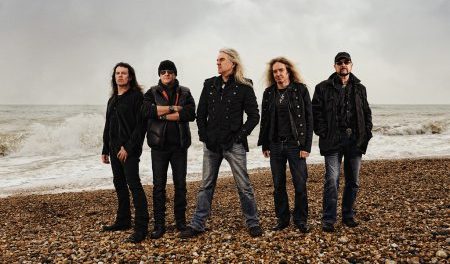 “SAXON has never been a lazy band and especially this year we have been extremely busy!

“After we played several festivals all across Europe and some great gigs together with JUDAS PRIEST and the very first Hamburg Metal Days, we have almost finished the new album. The mix is done and the mastering is almost finished. We have guys who are right now putting the last details together and working bits and pieces out for the artwork. Watch out for further news releases like album cover, track list, some more behind the scenes info etc.

“Since most of album production work is done, the band can’t keep their feet still and have decided to play a very short Christmas run of three dates.

“We are looking forward to sharing the stage in Switzerland with our mates from MOTÖRHEAD and EDGUY and on the two Dutch shows we will be accompanied by CRIMES OF PASSION. Everybody that comes to our two headliner shows will get little Christmas surprise and we will spoil you with at least one new song from the new album which we will perform live!

“After that, the promotion machine starts; pre-listening sessions for journalists, interviews and, and, and…

“So keep your eyes open because soon you will see the media full of new SAXON stuff!”

SAXON’s new album was mixed by producer Andy Sneap, who has previously worked with MEGADETH, ACCEPT, NEVERMORE, EXODUS and ARCH ENEMY, among many others. The follow-up to 2011’s “Call To Arms” will feature cover artwork by longtime SAXON artist Paul Raymond Gregory and is tentatively due in February 2013.