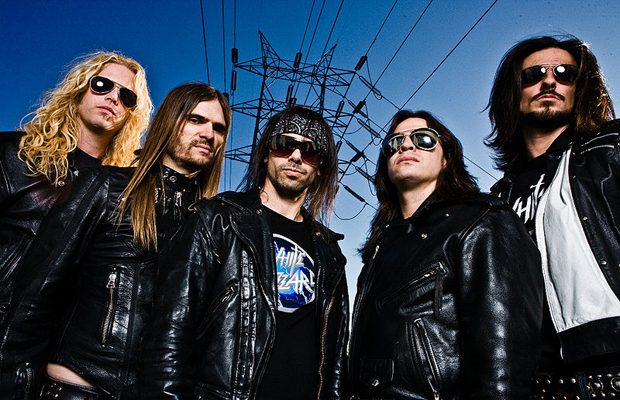 “Strike The Iron”, a brand new song from Los Angeles metallers WHITE WIZZARD, can be streamed below. The track comes off the band’s third full-length album, “The Devils Cut”, which will be released on June 3 in Europe via Earache Records and June 25 in the USA through Century Media/Earache. The CD features artwork by Cameron Davis, who is known for as the lead character designer and illustrator for the Guitar Hero video game series.

Comments WHITE WIZZARD bassist and mainman Jon Leon: “‘Strike The Iron’ is my favorite WHITE WIZZARD song I have ever written, along with‘The Sun Also Rises’, which closes the new record. I am very proud of the arrangement. I had the verse melody in my head and chorus line before I even picked up the guitar and started writing it. It has stunning leads by Jake and Will, and Joseph interpreted the vocal melody fantastically and gave so much character to it. This song really exemplifies everything this lineup is capable of and everyone’s talents really came through on it. It never lets up and we are very excited to get this one out there live…I expect it to be our opening song for the next couple of years.”

“The Devils Cut” was once again produced by Ralph Patlan(MEGADETH, UFO, MICHAEL SCHENKER) at Phase Four Studios in Tempe, Arizona.

Regarding the cover artwork for the new CD, Leon aid: “It was great to work with the amazing artist Cameron Davis again, who also did the art for our album ‘Over The Top’. Cameron and I live in the same building here in L.A. and he is a really talented guy. When he presented me the piece for the album cover, I knew right away it was the one. It has amazing imagery and depth and is very artful, while making a tongue-in-cheek statement poking some fun at organized religion, which is something I feel strongly about.

“Some of my lyrics on this album and previous albums focus on not letting religion and the cult of group belief blind you from the preservation of thinking for yourself and being an individual, so it ties into that very well, as the statement of the piece is how religion is imprisonment for the soul and how, even within its own confines, it forces its believers into blind group submission. I think any of us that went to catholic school as a child can relate to that nun!!! It has ‘classic metal cover’ all over it and it just blew my mind.

“I look forward to this imagery being out there and am proud to have it be a part of WHITE WIZZARD. To have art of this quality to convey the visual aspects of the band is just fantastic.”