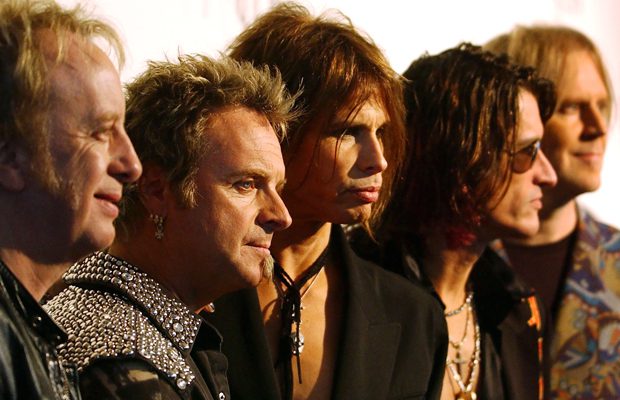 In March 2011, Japan was beset by a huge earthquake, a monstrous tsunami and the subsequent meltdown of the Fukushima nuclear plant. In the autumn of 2011, despite advice to the contrary, AEROSMITH brought their “Back On The Road” tour to Japan, a country with which they’d always had a special relationship. The Japanese fans came out in their droves and AEROSMITH responded with some of the finest gigs of their distinguished career.

“Rock For The Rising Sun” follows the band on that tour combining full-length live tracks with behind-the-scenes footage which is at times touching and emotional and at others humorous and insightful. More than anything else it demonstrates the Japanese fans’ love affair withAEROSMITH and their music.

“Rock For The Rising Sun” was directed by Casey Patrick Tebo, and combines live performance material with behind-the-scenes footage that shows the nation coping with the destruction. The movie is due for release on DVD and Blu-ray on July 22 via Eagle Rock Entertainment.

“I have never seen any band I’ve ever worked for be revered like this band was by the Japanese people,” Tebo told BostonHerald.com in a recent interview. “They’re bigger than THE [ROLLING] STONES, bigger than THE BEATLES. They’re very special over there.”

Tebo told BostonHerald.com that he filmed all of the band’s shows but didn’t set out to make a documentary. But when he saw the footage, he knew he had a great concert film.

“The band didn’t even know,” he said. “So when it was finished, I rented a theater in L.A. and showed it to them. When the movie was done, [AEROSMITH guitarist] Joe [Perry] stood up and gave me a hug and started crying. It was a pretty ?cathartic thing.”

Check out a trailer for the film below.