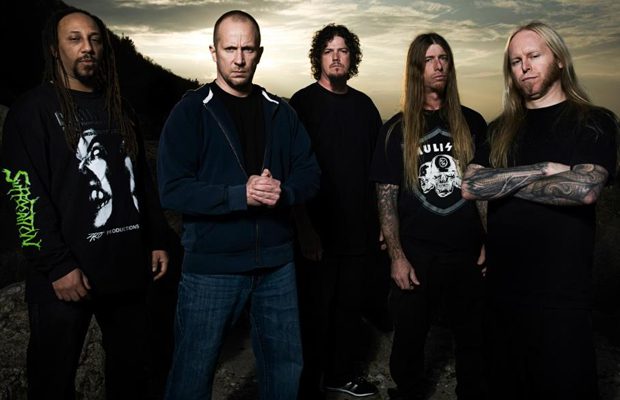 Fan-filmed video footage of SUFFOCATION‘s June 4 performance at Gala Hala in Ljubljana, Slovenia can be seen below.

SUFFOCATION has recruited John Gallagher (DYING FETUS) to handle lead vocals on a number of shows this spring. Gallagher is filling in for SUFFOCATION‘s regular vocalist, Frank Mullen, who is unable to make the dates due to personal commitments.

“I’m stoked to be performing on several shows with longtime friends and my brothers in metal, SUFFOCATION,” said Gallagher a couple of monts back. “It’s going to be a blast and since I’ll JUST be singing the vocals, they are going to be super sick and guttural. So make sure to come out and party with us and witness the brutality!”

“Pinnacle Of Bedlam”, the new album from SUFFOCATION, has entered the German Media Control chart at position No. 58. The CD was released on February 19 via Nuclear Blast Records. The artwork was handled this time around by Raymond Swanland and can be found below.

As previousy reported, “Pinnacle Of Bedlam”sold 3,200 copies in the United States during its first week of release to land at position No. 152 on The Billboard 200 chart. The effort landed at position No. 2 on the Top New Artist Albums (Heatseekers) chart, which lists the best-selling albums by new and developing artists, defined as those who have never appeared in the Top 100 of The Billboard 200.

“Pinnacle Of Bedlam” was produced by the band at Full Force Studiosin New York with longtime collaborator Joe Cincotta. The mixing and mastering of the effort was handled by Chris “Zeuss” Harris(HATEBREED, ARSIS, SUICIDE SILENCE).