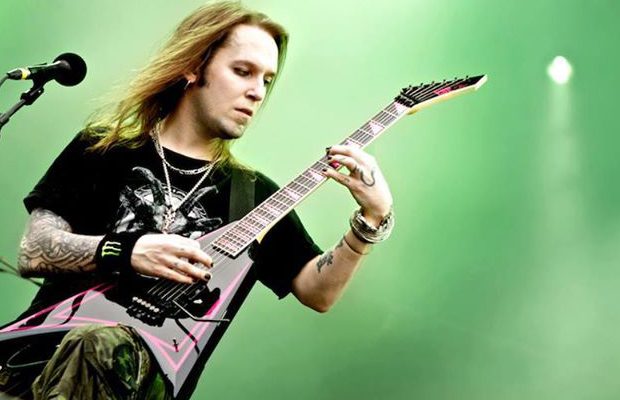 Paolo Bianco of Soundsblog.it recently interviewed vocalist/guitarist Alexi Laiho and bassist Henkka Seppälä (a.k.a. Henkka T. Blacksmith) of Finnish metallers CHILDREN OF BODOM. You can now watch the chat below.

CHILDREN OF BODOM‘s eighth album, “Halo Of Blood”, will be released on June 11 in North America via Nuclear Blast Records. The cover art was created by Sami Saramäki, who was responsible for the artwork on previous CHILDREN OF BODOM albums “Follow The Reaper”, “Are You Dead Yet?” and “Hate Crew Deathroll”.

Pre-order the CD (including the bonus track and digital booklet) now and get the single “Transference” instantly.

Comments CHILDREN OF BODOM guitarist/vocalist Alexi Laiho: “‘Transference’ is a straight-up CHILDREN OF BODOM to-the-core-type song and therefore was a good pick for a video and obviously is one of our favorite tracks. It always had an evil vibe to it, which I wish I knew how to explain because it still gives me chills… Enjoy!”

CHILDREN OF BODOM‘s new CD was recorded at Danger Johnny Studios in Helsinki. For the recording of the LP, CHILDREN OF BODOMhas teamed up with recording engineer Mikko Karmila, who worked with the band on their fan-favorite albums “Hatebreeder”, “Follow The Reaper” and “Hate Crew Deathroll”, as well as Swedish producer Peter Tägtgren (MARDUK, AMON AMARTH), who oversaw production of both vocals and keyboards on the record. The album was mixed at Finnvox Studios in Helsinki.

Commented Laiho: “‘Halo Of Blood’ is the eighth studio album fromCHILDREN OF BODOM, and believe it or not, but we still managed to keep it fresh and new while still maintaining the elements that make COBsound recognizable. It’s got the fastest and the slowest song we ever made and lyrics wise there are themes we had never had before. It’s 10 new songs of pure Nordic metal and whether you enjoy it with a beer or a glass of water, I’m sure you will have a good time.”