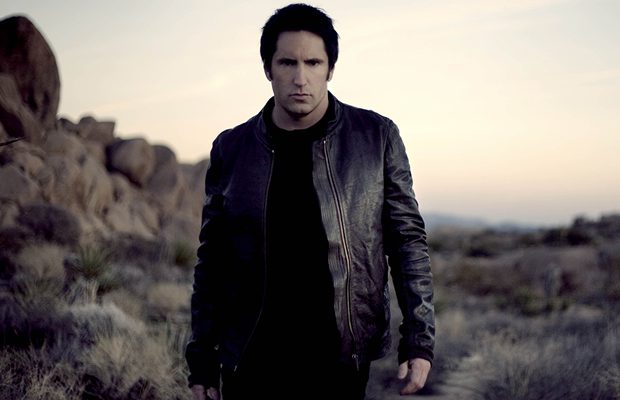 “Came Back Haunted”, the new single from NINE INCH NAILS, is available for streaming using the SoundCloud widget below. The track will appear on the band’s new album, which will reportedly be called“Hesitation Marks” and is scheduled for release on September 3.

“Came Back Haunted” “harkens back to early NINE INCH NAILS,” saysLisa Worden, Music Director for Los Angeles alternative station KROQ. “I think it’s in line with the first two albums,” Worden continues. “It’s got a great beat, it’s not the experimental material [NINE INCH NAILS mainman]Trent‘s [Reznor] done in the last five years.” Worden indicated the song didn’t strike her as angry. Rather the beat is what made an impression. “I wouldn’t say that it’s dance-y, but it does have a great beat, a groove.Trent really brought it with this song. It’s going to sound amazing to new fans and old. It’s just cool.”

Six years after his NINE INCH NAILS contract with Interscope Recordsexpired and he became an independent artist, Reznor has signed a new deal for NINE INCH NAILS with Columbia Records, marking NIN‘s return to the major label industry. Reznor‘s other act, HOW TO DESTROY ANGELS, made a deal with Columbia last year, so extending the partnership to NINE INCH NAILS doesn’t seem like much of a stretch. A new NINE INCH NAILS album will arrive later this year.

Reznor said, “For the last year I’ve been secretly working non-stop withAtticus Ross and Alan Moulder on a new, full-length NINE INCH NAILSrecord, which I am happy to say is finished and frankly fucking great. This is the real impetus and motivation behind the decision to assemble a new band and tour again. My forays into film, HOW TO DESTROY ANGELS and other projects really stimulated me creatively and I decided to focus that energy on taking NINE INCH NAILS to a new place.”

Reznor officially resurrected NINE INCH NAILS a few months ago after a four-year break for an extended tour that will kick off this summer.

The band is performing at a number of festivals, including Lollapalooza,Outside Lands, Leeds, Reading, Made In America and the Voodoo Festival.

The new band lineup will debut on July 26 at the Fuji Rock festival in Japan. The show will mark NINE INCH NAILS‘ first live performance in nearly four years.

Reznor officially put NINE INCH NAILS on hiatus after the final shows by the last version of the group in September 2009.

Since then, Reznor and collaborator Atticus Ross have scored two films, including “The Social Network”, for which they won a Golden Globe and an Academy Award in 2010.

Along with Reznor‘s wife, singer Mariqueen Maandig, Reznor and Rossalso launched HOW TO DESTROY ANGELS, whose debut disc, “Welcome Oblivion”, came out in March.