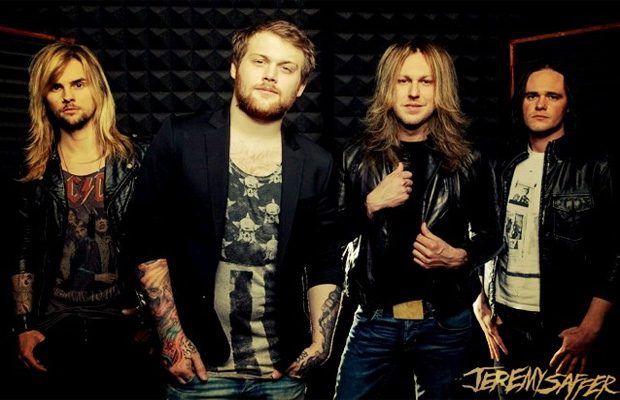 Roadrunner Records has announced WeAreHarlot as the newest members of its renowned roster. The acclaimed rock ‘n’ roll band’s much anticipated debut track, “Denial,” is streaming now at their official YouTube channel (www.youtube.com/WeAreHarlot), while a free download is available at the just-launched www.WeAreHarlot.com.

WeAreHarlot – fronted by vocalist Danny Worsnop and guitarist Jeff George alongside bassist Brian Weaver and drummer Bruno Agra – make their live debut at this weekend’s Rock On The Range 2014 at Columbus, Ohio’s Crew Stadium, slated for this Sunday, May 18th. Additional dates will be announced soon. The band recently finished recording their eagerly awaited debut album at The Fortress recording studio in Los Angeles, engineered and mixed by Jay Ruston (Anthrax, Stone Sour). The as-yet-untitled collection is slated to arrive later this year.

“We are beyond excited to be a part the Roadrunner Records family of Artists,” stated Danny, Jeff, Bruno and Brian. “It’s been a long road getting here, but nothing was going to or ever will detour this band, and Roadrunner has been there championing us from the beginning. When it came time to sign a deal all the labels came calling, but only one got the call back. Roadrunner Records’ foundations were built on great rock ‘n’ roll bands, bands that we love, and we are here to continue carrying that torch and shaking those foundations. We knew that rock music needed a facelift fast and that real rock ‘n’ roll needed to be back front and center again! That’s why we are here, to bring this music to a whole new generation of people that have been screaming out for what they deserve. Team WeAreHarlot is in place and it’s unstoppable! So in closing, thanks again to Roadrunner Records and the entire WeAreHarlot family, this announcement is for us all. What time is the f***ing show!?”

WeAreHarlot have already begun earning accolades for their classic brand of hard-edged rock ‘n roll, with Guitar World declaring them to be “one of the most hotly anticipated acts in the heavy music scene…songs like ‘Denial’ are swaggering and straightforward ragers, jam-packed with buoyant, buzzsaw riffs and melodic hooks galore and topped with plenty of tasty shredding…The result is a sound that comes off like a gloriously hedonistic hard-rock throwback, but encased in a modern aggro-metal sheen.” What’s more, ARTISTDirect named WeAreHarlot to its “Top Ten Most Anticipated 2014 Hard Rock & Metal Albums,” noting, “if anybody knows how to create a real unbridled rock-and-f***ing-roll album, it’s Danny Worsnop. He’s added that flare and fire to Asking Alexandria, and now he’s got a venue to go buckwild with an album meant to make panties drop and bras fly into the air. This is exactly what the world needs now.” Additionally, Music Junkie Press put WeAreHarlot atop their “14 Bands That Will Rule 2014” list with National Rock Review declaring WeAreHarlot, “one of the most anticipated rock bands of 2014.”