STEEL PANTHER: NSFW Version Of ‘Party Like Tomorrow Is The End Of The World’ Video Released 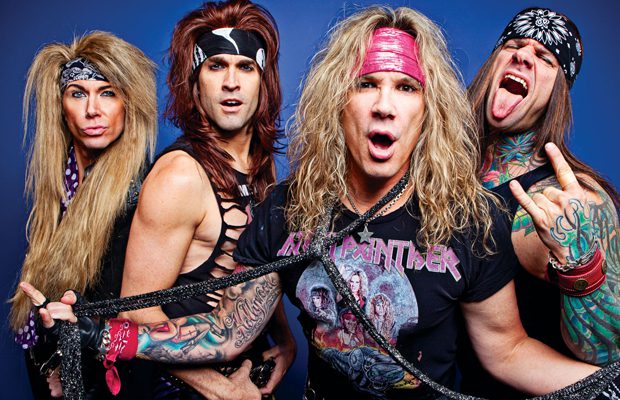 “Party Like Tomorrow Is The End Of The World” is the first single/video from STEEL PANTHER‘s third album, “All You Can Eat”, which is due in early 2014.

Regarding the new CD title, singer Michael Starr said: “We feel like STEEL PANTHER is like a buffet. You know what I mean?! There’s a little bit of everything for everybody. And you can have as much of us as you want.”

Speaking to the South Bend Tribune, STEEL PANTHER drummer Stix Zadinia (real name: Darren Leader) stated about the band’s new CD: “If you liked [2009’s] ‘Feel The Steel’ and [2011’s] ‘Balls Out’, you will love this record. It is more heavy metal songs that are hooky and great and fun and make you want to rock and make you want to have a good time and party. Also, there is a lot of riffage on this album that I think anybody who has ever questioned this band — ‘Oh, those guys wear spandex and it is 2000-whatever’ — these songs are going to put all of that to rest.”

Regarding naysayers that say STEEL PANTHER is a joke-metal band, Zadinia said: “Listen to our record and tell us that our songs aren’t better than most of the bands out there. How funny is that? At the end of the day, it comes down to the songs. I think our songs — without sounding egotistical — I think our songs are great. When you hear the hooks in our songs, you hear the playing and you hear the vocals, you throw that up against any band in any era, and I think it stands up.”