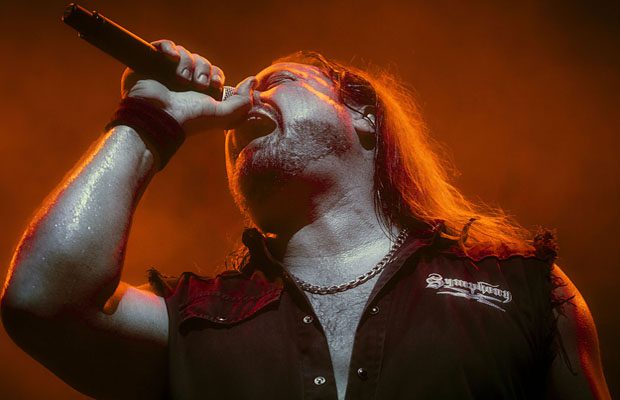 On whether they knew drummer Mike Portnoy was leaving ADRENALINE MOB before Mike released a statement announcing his departure:

Russell: “Of course we knew about it before he made it public. He’s been, obviously, real busy with THE WINERY DOGS, which is his next band that he’s doing. The truth of it is we wanna keep working, we wanna keep doing ADRENALINE MOB and we don’t wanna wait around for Mike to have the time [to put into ADRENALINE MOB]. And he doesn’t know when he will have the time again, so that’s really what’s going down. Mike Portnoy was asked to be in the band by myself. Me and [guitarist Mike]Orlando had already written all the material, so [ADRENALINE MOB‘s debut album] ‘Omertá’ was completely finished before Mike joined the act. And it’s a bummer, but he’s got his sights on other things, and he’s not gonna stick around. So we wish him the best of luck, but the MOB‘s gotta go on.”

On whether ADRENALINE MOB has a particular drummer in mind to replace Mike Portnoy:

Russell: “We don’t have a drummer in mind yet, but we are writing new material right now and we’re looking to get a record out sometime later this year. So that’s our plan and that’s what we’re currently doing. Mikewas really cool with even suggesting some people to replace him in the band. and we’re looking at all options right now. The word is obviously out that the MOB needs a drummer. We’re more focusing on writing material right now for a new album. But yeah, the drummer thing is definitely the next thing that we need to tackle after we get this material written.”