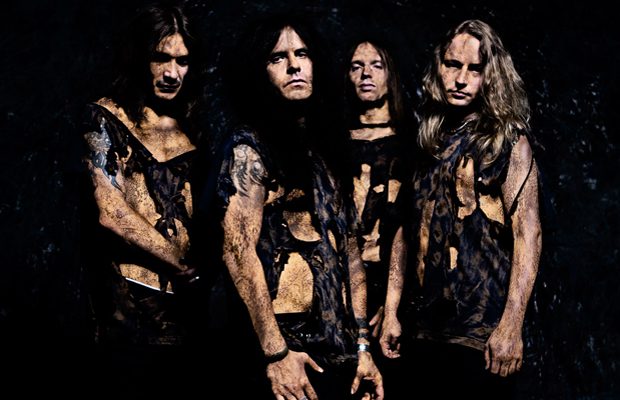 German thrash metal veterans KREATOR will release their new concert DVD/Blu-ray, “Dying Alive”, on August 30 via Nuclear Blast. The set features the band’s sold-out homecoming show in Oberhausen, Germany on December 22, 2012 after an extensive 45-day European tour in support of KREATOR‘s “Phantom Antichrist” album. The packed and sweat-driven show was filmed by 24 cameras, as well as guitar and even mosh-pit cams.

“Dying Alive” will be issued in the following formats:

On November 9, 2012, KREATOR released a new seven-inch single,“Civilization Collapse” (retail version: black; Nuclear Blast mailorder-only version: red, yellow, white) and as a digital download. The single contains the title cut backed by the non-album track “Wolfchild”, which was featured on the “Dark Symphonies – A Tribute To John Sinclair”album, released in September 2012 in Germany via Lübbe-Audio. The band also made a video for the song “Civilization Collapse”, which is said to be “mainly about the riots that took place in Greece most recently.”

“Civilization Collapse” comes off KREATOR‘s new album, “Phantom Antichrist”, which sold 3,900 copies in the United States in its first week of release. The CD landed at No. 1 on the Top New Artist Albums (Heatseekers) chart, which lists the best-selling albums by new and developing artists, defined as those who have never appeared in the Top 100 of The Billboard 200.