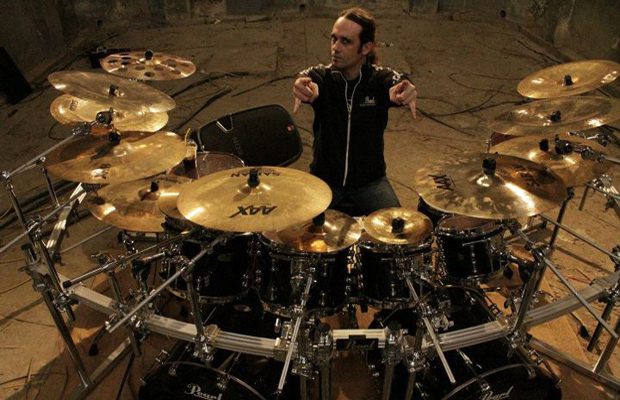 NILE drummer George Kollias is at 9800 Studios in Athens, Greece with with engineer Antonis Kontozoglou putting the finishing touches on the pre-production for his upcoming solo album. Kollias is scheduled to begin laying down drums for the CD on July 15. He says: “[I am] really happy with the songs so far.”

A new video update from the studio can be seen below.

Kollias‘ solo album is primarily set to show off some of George‘s craziest metal drumming to date, is being completely written and recorded by George, including the guitars, bass, keys, vocals, and percussion. It will also feature a DVD of the recording process.

Produced independently by Kollias, and appearing on the Hudson Ltd.label, this brand-new two-disc set comes four years after George‘s first instructional DVD release. Since then, Kollias has become known as an international authority on extreme metal drumming, and this DVD is a must-have for anyone interested in this topic.

Providing multiple workouts and specific concepts, “Intense Metal Drumming II” is a highly educational product that goes beyond licks and gives you a meaningful program that can help you in pushing your abilities to the next level. Topics covered include blast-beat concepts and workouts, extreme fill-ins, developing speed around the kit, and odd time concepts. George also covers reading concepts, practicing systems, general tips, and warm-ups, which take this DVD beyond just metal and make it useful and helpful for drummers of all styles. Another highlight of the DVD is a complete section on double bass speed, control, balance, and expanded vocabulary. Bonus features include a PDF containing all the exercises on the DVD, a documentary from George‘s 2010-2011 clinic tour, backstage footage, an equipment tour, and extensive interview with George.