November 17th : a “black” day in history of Greece since the same day in 1973 an open anti-junta revolt ended in bloodshed with a tank crashing trough the gates of the Polytechnic in Athens. That’s the reason for massive demonstrations every year on that day…a day which is not the best one being on the road…However, I couldn’t miss the chance of that concert with this lethal “package” consisted of Kreator, Morbid Angel, Nile and Fueled By Fire.

It was around 19:50 when I arrived at the venue which was almost full. Nile was already

on stage and first track (for me) was “Kafir!”: the opener song from the great “Those Whom The Gods Detest”. Next song was “Hittite Dung Incantation” from the same album. I was standing on the second floor of the venue having a great wide-open view of the stage and the sound was awesome as well. You could feel Kolias’ toms beating inside your heart!  The band’s performance and the fans’ reactions were like it was the headlining band of the night. The crowd paid its tribute to Kolias by shouting his name rhythmically. Last song was the fans’ favorite “Black Seeds of Vengeance” and Tim Yeung (the drummer of Morbid Angel) hit the stage and sang the refrain of the song along with Karl Sanders. Definitely a superb death metal appearance!

It’s time for the legends: Morbid Angel. After the disappointing – for the hardcore fans of the band – release of “Illud Divinum Insanus”, I was curious to see the setlist and the reactions of the fans. David Vincent and his friends hit the stage with “Immortal Rites” from the “Altars of Madness” and the crowd welcomed the band with merciless headbanging! Next song was “Fall From Grace” from “Blessed Are The Sick” and right after “Rapture” from “Covenant” came to continue the massacre! This is a fuckin classic Morbid Angel show without a doubt! The band is in great shape and the sound is still perfect, same as before during Nile’s performance.  “Nevermore” was the only song from the new album before returning to classics with “Lord of All Fevers and Plague”, “Chapel Of Ghouls” and “God of Emptiness”! “World Of Shit (The Promised Land)” from “Covenant” was the closer song of this death metal holocaust!  Absolute supremacy: exactly like Vincent promised to the Metalpaths’ readers in an interview a few weeks ago!

The time has come for the most of the fans. The stage is preparing for the German thrashers to hit the stage. A huge cloth spreads along the stage and the engineers are working on the last details for the promising 3D show that you’ve probably been informed through Metalpaths a couple of weeks ago. It’s been my first time seeing Kreator live and I was really expecting this show for a long time since I’m a big fan of the band. The 3D show starts with a projector featuring pictures from Kreator’s whole career and Johnny Cash’s cover on “Personal Jesus” as an intro-song. The projections continue with scenes from the “Phantom Antichrist” video-clip and “Mars Mantra” sounds from the speakers…The cloth falls down and the show starts with “Phantom Antichrist”, the self-titled song from the new album! From the very first minutes, it seems that it’s gonna be a killer show! The crowd is on fire, the sound is even better than what was before and the lights are the best that I have ever seen in my life!  Next song is “From Flood Into Fire” from the last album again and it seems that the new stuff is really welcomed by the fans since the reactions to the new songs are more than positive! It’s time for something older: “Enemy Of God” and the party has started for good! Next is “Phobia” and there is no head that doesn’t bang at the venue! The band’s performance has overcome my expectations: Kreator kick ass live! 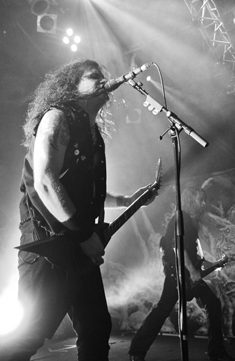 Returning to the new album next songs were “Hordes Of Chaos” and “Civilization Collapse”: a song that the band is currently working on a video clip for, which is going to feature scenes from Greek demonstrations! Next song in row was “Extreme Aggression” and what happened can’t really be described in words! The venue turned into battlefield! Petrozza screams his guts out and the fans’ reactions remember me of a football match! Right after “Extreme Aggression”, without even anticipate taking a breath, “People Of The Lie” hit us like a punch in the face!  The new song “Death to The World” was a short break for me when “Coma Of Souls/Endless Pain” and “Pleasure To Kill” came to cause the biggest circle-pits of the night! HELL YEAH, this is a fuckin THRASH METAL night!

“The Patriarch” was the last song before the encore. First song of the encore was “Violent Revolution” from the self-titled album and then “United in Hate” from “Phantom Antichrist” again. It’s time for the most favorite song of the Greek crowd.  A song which really unites the Greek audience with Kreator: “Betrayer” and…you CAN’T DENY! After that, Petrozza grabs a Kreator flag and a Greek one to scream: “THESSALONIKI IT’S TIME TO RAISE THE FLAG OF HATE”! You can’t even imagine what happened if you haven’t seen Kreator before!

Everyone was leaving the venue with a huge smile! It’s been definitely one of the best shows in Thessaloniki during the last years in terms of the sound, the crowd, the bands’ appearances and the great organization that we rarely meet in Greek concerts! Definitely a night to remember!