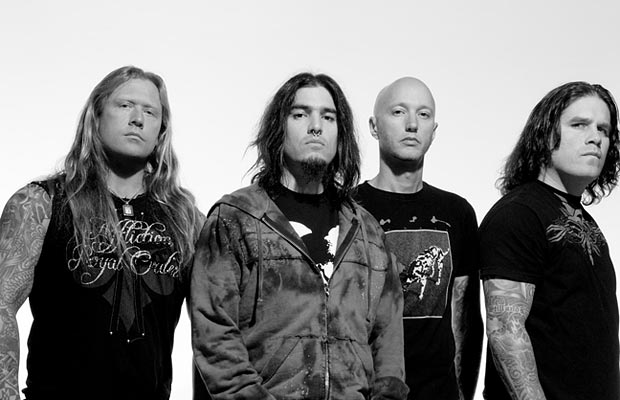 Some fans might remember MacEachern from MACHINE HEAD‘s 2007“The Black Tyranny” tour, on which he performed with his previous band,SANCTITY. MACHINE HEAD, challenged to find a fill-in bass player for the North American tour after an injury sidelined their then-four-stringerAdam Duce, also found themselves in need of someone to sing harmony with singer/guitarist Robb Flynn. Flynn remembers: “We had locked inBrandon Sigmund of local boys HOSTILITY to play bass on that tour, but we soon realized we’d need someone to hit the high harmonies. Our A&R guy [at Roadrunner Records], Monte Conner, recommended Jaredsince he was already on the tour, and that ended up being a great call.Jared flew out a few days before the tour and rehearsed with us and did great. What was most impressive about the whole thing was that he was doing double duty — opening for MACHINE HEAD with his band at the time, SANCTITY, and then later singing with us. He would stay sober until after our set, and often get in the van and drive all night. His seriousness and dedication was awesome to see and it stuck with us.”

Earlier this year, MACHINE HEAD conducted an extensive search for candidates through various channels, the most fruitful of which proved to be video submissions. Sifting through more than 400 videos, the band personally reviewed and evaluated everyone’s performances, includingMacEachern, who made the short list without a second thought. Lead guitarist Phil Demmel recalls: “There were dozens of amazing players, and it was interesting to watch each one take on our tunes. One of our biggest criteria for this gig was to be able to sing the high harmonies. That was our litmus test. And Jared passed with flying colors.”

After reviewing all of the submissions, the band narrowed down the 400-plus candidates to a short list of seven, each of whom took a trip to Oakland to perform a handful of songs in person and spend the day hanging with the band. Drummer Dave McClain remembers: “Jared came in to the audition and just killed it! Besides being able to nail the bass and vocal harmonies, he also had the vibe and personality to make it feel like we were a BAND again. It was a great feeling and we all knew he was the guy.”

MacEachern first picked up concert bass at 12, and around the same time discovered metal. Jared recalls: “I heard the [METALLICA] song‘Unforgiven’ and really liked it. The next day my friend gave me [METALLICA‘s first album] ‘Kill ‘Em All’ and it was over. I became completely enamored with all the metal bands of that time; METALLICA,MEGADETH, SLAYER and PANTERA, but when it came to bass, it was all about Cliff Burton, he was, and is my dude.” With a brief stint at the Brevard School for Music Performance, Jared has consistently played bass for the past 22 years, most notably in SANCTITY, where oddly enough, the band needed a guitar player. “That was purely out of necessity,” he explains, “I’d been a bass player, but that gig opened up and I gave it a shot on the six-stringer.”

After extensive global touring with SANCTITY and the birth of Jared‘s daughter in 2007, the band’s release from their label ignited Jared’s sense of responsibility and he quit the group to focus on her. But music stayed a part of his life and he continued to jam locally throughout the south with death metal bands FROM A DIG and TELIC, until he saw MACHINE HEADwere in need and thought he’d try out.

Frontman Robb Flynn reflects: “We really wanted a guy that was hungry for this, someone who could live and breathe this with us. Dave would joke around that we didn’t want to get someone too green that’d be, like, ‘Oh my god, is this a dressing room?!’, but we also didn’t want someone who was too jaded by the whole thing and ‘been there done that.’ We thought the perfect guy would be someone who’d paid some dues, who had done nine or ten crummy van tours, and wasn’t broken by that, but inspired to keep going and play music, and in many ways that was Jared. I mean, hell, the guy’s only rode in a bus for two nights, one of which was with us! It brings a really cool level of appreciation to the table, and it shows where his heart’s at.”

Jared enthuses: “I’m ready to get to work! This tour is going to kick ass and the new tunes are heavy as shit! I’m SO looking forward to making good music with good dudes!”

Jared‘s audition videos can be seen below.