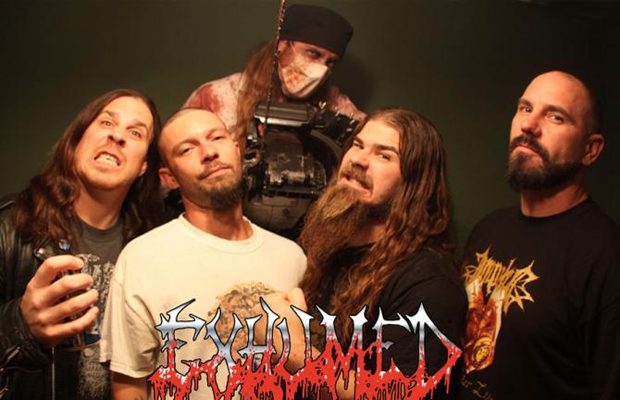 West Coast horror hellions EXHUMED will release their new album,“Necrocacy”, via Relapse Records in North America on August 6, in Germany/Benelux on August 2 and in the rest of the world on August 5. The effort wil be available in CD, LP, deluxe LP and digital formats. The limited-edition “Necrocracy Party 2013 Political Rally Pack” contains a deluxe LP plus a bonus CD with the entire album plus five exclusive tracks, a pin set, bumper sticker and poster pack, limited to a one-time pressing of 500 copies worldwide.

Among Decibel magazine’s most anticipated albums of 2013, “Necrocacy”delivers nine goretorn tracks of prime audio sickness oozing blazing guitars, filth-stricken vocals and obscene drum blasts. Quite possibly their finest hour yet, as the years roll by EXHUMED refuse to mellow. This is a band that stinks like the rotting flesh of a nation waiting for revolution: Vote Necrocracy Party 2013!

The follow-up to 2011’s maniacal “All Guts, No Glory” longplayer,“Necrocacy” was recorded at Arcane Digital Recording in Chandler, Arizona with Ryan Butler (MISERY INDEX, LANDMINE MARATHON,PHOBIA). All drums were tracked at Trench Studios in Corona, California with John Haddad (HIRAX, ABYSMAL DAWN, INTRONAUT).

Comments Matt Harvey, he of the decrepit death rattle and repugnant requiems: “We’re super pumped that 2013 will see the release of‘Necrocracy’. We think it’s our heaviest record to date and we can’t wait to start playing the new tunes on the road. The album is a bit hookier and meatier than ‘All Guts…’ and we hope all you maniacs enjoy it. You should find a few more tunes on this one to bang your head and get wasted to! See you on the road or on the slab!”

The video for the song “Coins Upon The Eyes” can be seen below.

EXHUMED will embark on a mega North American tour this fall, supporting headliners DYING FETUS. The onstage battery will commence on October 4 in Wilmington, Delaware and devour nearly a month’s worth of cities, coming to a close on November 2 in Springfield, Virginia. Additional support will be provided by DEVOURMENT, WAKING THE CADAVER, ABIOTIC andRIVERS OF NIHIL.