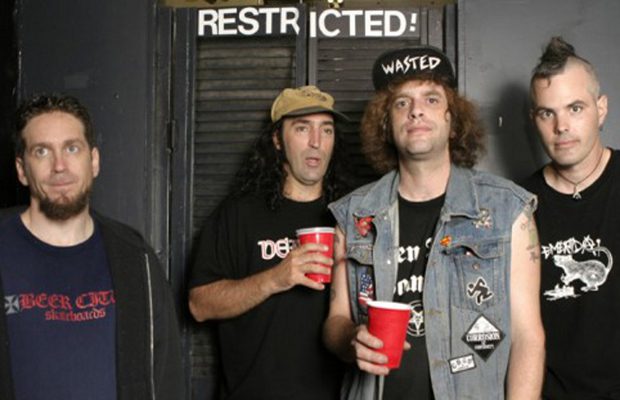 A statement from D.R.I.‘s European booking agency, M.A.D. Tourbooking, reads as follows: “We are really sorry that we have to tell you that another tour has been canceled. The guitar player of D.R.I. has huge problems with his finger, he can’t bend it anymore, so he’s unable to play guitar. Seems like it’s from an injury moth ago. We wish him all the best and hope that he gets well soon!”

Cassidy underwent emergency surgery in September 2012 for a severe blockage caused by the reversal surgery he had just three weeks earlier.

In 2004, Cassidy was diagnosed with colon cancer. He underwent surgery (a one-foot section of large intestine was removed through an eight-inch incision in his stomach on March 27, 2006), radiation and chemotherapy and was previously said to be winning the battle against the disease.

D.R.I.‘s classic 1987 album “Crossover” was reissued in April 2010 viaBeer City Records. Available on LP, CD and as a digital download, the LP was remastered by Bill Metoyer, who was the engineer for the original recordings. The CD and digital version of the reissue include the original 13 songs plus 11 bonus tracks.

For the past 31 years, D.R.I. has been the epitome of the aggressive, hardcore-punk thrash sound that we’ve all become accustomed to hearing. Throughout this time, they’ve been one of the few genuine underground bands to remain true to their pure punk roots. Still actively touring and recording, the only thing that may have changed is that they’re a little older now, but time hasn’t gotten the best of the DIRTY ROTTEN IMBECILES. They’re still thrashing just as hard, and just as loud as ever, continuing to overload our senses with the sound that is, and will always remain, uniquely D.R.I.