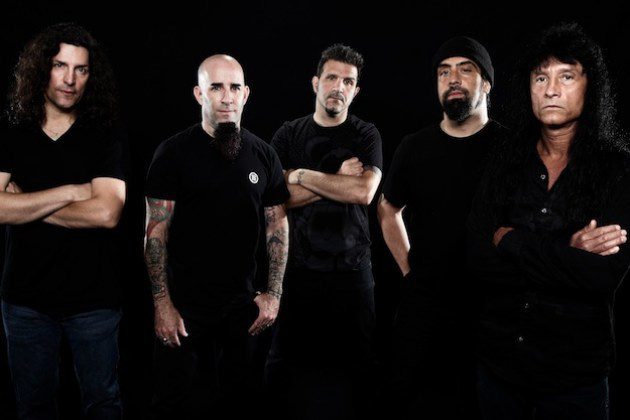 Fan-filmed video footage of ANTHRAX‘s July 28 performance at Gagarin 205 in Athens, Greece can be seen below.

ANTHRAX‘s current touring lineup includes SHADOWS FALL guitarist Jon Donais, who has been touring with ANTHRAX since Rob Caggiano‘s departure in January, and former TESTAMENT/SLAYER and currentANIMETAL USA drummer Jon Dette, who is filling in for Charlie Benantewhile Charlie is “dealing with personal issues.”

Dette previously filled in for Benante on ANTHRAX‘s European tour last fall as the support act for MOTÖRHEAD and Australia’s Soundwave Festival in February/March.

Asked how he landed the ANTHRAX gig, Dette told “The Blairing Out With Eric Blair Show”: “Actually, Jason Bittner from SHADOWS FALL, who was filling in for Charlie on this last ANTHRAX run last year, couldn’t do one of the tours that was coming up and called me and asked me if I would be available to do it. And I said, ‘Of course. It would be great.’ And the next day Charlie called me — which, Charlie is one my biggest influences ever, next to [Dave] Lombardo [of SLAYER], so it was kind of a surreal moment for me to get a call like that, saying, ‘Hey, can you help me out?’ Which, of course, I said, ‘Absolutely”

Regarding how it feels to be playing with ANTHRAX, Dette said: “It’s amazing, man. The first day that I started playing drums — a lot of people may or may not know this — the first album I ever got from the day I got my drum set was ‘Fistful Of Metal’ [by ANTHRAX], and literally, the first song I ever tried playing on drums was ‘Metal Thrashing Mad’. Actually, I [was] hanging out with Charlie and I told him that this morning, and he was, like, ‘Really?’ And I’m, like, ‘Yeah, really.’ [laughs] ANTHRAX,METALLICA and SLAYER, they were such a foundation of my style growing up, and I’ve been privileged now to actually play for two of those bands. It’s a very natural thing for me to play, but at the same time, seeing the back of their heads on stage, and Joey [Belladonna] is looking at me and he’s singing, and I’m just, like, ‘This is great.’ I guess you can say that I play with a lot of passion when I’m with those bands, ’cause it’s just absolutely passion and just an amazing experience.”