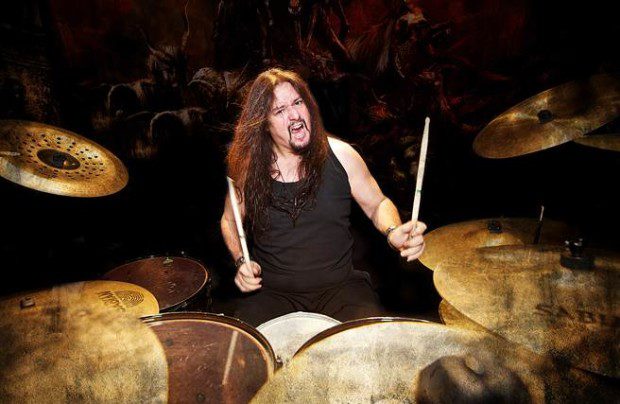 Legendary extreme-metal drummer Gene Hoglan (TESTAMENT, DEATH, STRAPPING YOUNG LAD, DARK ANGEL, DETHKLOK) has set “The Atomic Clock: The Clock Strikes Two” as the title of his upcoming DVD. The disc will feature “a lot of the stuff I have been doing at my clinics,” Gene told MediaMikes.com.

He added: “For this release, I was able to get the licenses for the songs I am playing. Everything from DEATH, TESTAMENT and MELDRUM are going to be on there. The new DVD has a lot of depth to it, and I have tried to improve on everything included.”

The jam-packed DVD is available for pre-sale now, with several awesome package options. If that isn’t enough, although Gene has footage chosen for “The Atomic Clock: The Clock Strikes Two“, he’s leaving it up to his biggest fans to really decide what they would like to see.

Everyone knows an artist is nothing without their fans. After years of your faithful and much-appreciated support, Gene Hoglan wants give something back, so we are turning to you, his fans, for what you’d like to see next.

As Gene continues the process of creating a bigger and better sequel to his first DVD release, he’d like to hear from you. Email streetteam@reversedrecords.com and tell Gene what you want to see on the next DVD, and you will be given the chance to pre-order several packages. There are seven “levels” or packages that fans can pre-order the DVD with.

Hoglan takes a moment to explain the portions of the second “The Atomic Clock” DVD that are set in stone: “I’d like to take a moment to tell you guys about something I’m extremely excited about, my upcoming DVD. It is going to be roughly two hours of awesome footage of not only me behind the kit playing, but tons of interviews with some the greats that I’ve had the honor to play with over the last couple of years. Guys from TESTAMENT, DETHKLOK, ANTHRAX and many others. There will also of course be a load of tips and insights from me to hopefully propel players of all calibers (and instruments, for that matter) up to the next level.

“Now, the most exciting part of the ‘songs that I play’ portion of the program, is that on the new DVD, I will be performing to the actual recorded tracks from some of your favorite bands that I have played for (or am currently playing). That’s pretty darned cool, if ya ask me!

“We at Hoglan Industries are eagerly looking forward to its release before the end of the year, and I will keep everybody regularly updated to its progress in the ensuing weeks.”

Hoglan is planning a series of appearances under the “The Gene Hoglan Experience” banner, set to take place this fall, where he will tell stories and play some of your favorite songs from your favorite bands that he has performed with over the years.

Acording to a press release, “The Gene Hoglan Experience” is “an intimate gathering of metal fans brought together to celebrate the legacy and 30-year career of one of metal’s most legendary drummers.”

Hoglan came up with this concept to give the fans what they want: the ultimate “Gene” experience. In addition to telling personal stories, as mentioned above, Hoglan will reveal some of his secret techniques and tips to help all drummers and musicians of all levels.

You get to meet Hoglan and have access to his exclusive merchandise from Gene himself.
You get to ask Hoglan anything you want!

Hoglan is heralded and is inspirational to many, even outside of his drumming and now celebrates a 30-year career in music as metal’s in-demand legendary drummer. Gene is the only metal drummer to accomplish two No. 1 records on the rock charts in 2012 with TESTAMENT’s “Dark Roots Of Earth” and DETHKLOK’s “Dethalbum III“.

Through a major lifestyle change, Hoglan has beat diabetes and lost over 160 lbs.