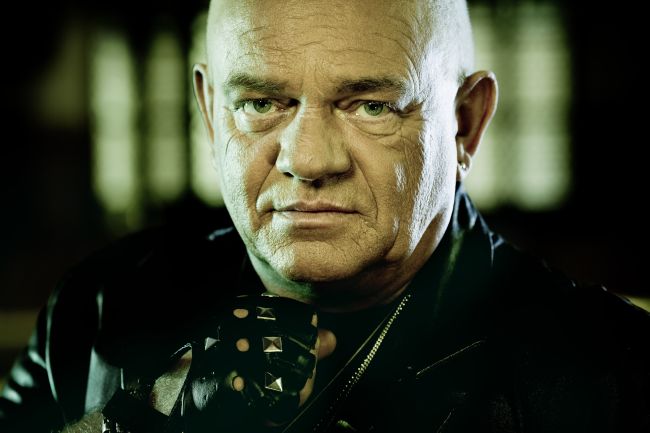 BigMusicGeek.com: At what point did you realize Stefan [Kaufmann, guitar] wasn’t going to be able to participate in the recording of [U.D.O.’s] “Steelhammer” [album]? Were there any warning signs that the health issues he was experiencing were going to be so bad?

Udo: It’s a long story. He already had some big problems. It all started when we did the “Rev-Raptor” album. We had to stop for three months because he couldn’t move anymore. He was going to the hospital in order to recover, and then, when we started touring, he was taking these really heavy pills. You could have killed an elephant with them. I’ve known Stefan for forty years and I saw that he couldn’t really move on stage. He had to get into these crazy positions so it wouldn’t hurt. He was always in pain, so he wasn’t in a good mood. Sometimes, he would just start shouting. I thought to myself, “This is not the real Stefan.” When the tour was over, I said, “Stefan, it’s better for you to stop. I don’t want to see you in a wheelchair.” We talked about many, many things, but in the end, he said to me, “I think you’re right. It’s better to stop doing this.” So I said, “You are welcome to produce the album and we can write some songs together,” and that’s when he said, “At the moment, I’m not in the mood to do this.” It wasn’t easy for me because I’ve been working together with him for so long, but sometimes you have to do things you don’t want to. In the end, I think it was the best thing for him and he’s now in better shape. He is producing a band in Switzerland, so I think he’s back.

BigMusicGeek.com: The transition couldn’t have been easy. Not only did you lose a band member, but you also lost a producer and a prolific songwriter. Had you considered working with a “new” producer for the recording of “Steelhammer“?

Udo: After working with and writing songs together with Stefan for over thirty years, it wasn’t so easy. He left the band due to health reasons and then he said to me, “I’m not in the mood to write songs or produce an album right now, “and I said, “Okay, then I have to do it in a different way.” Writing songs together with [bassist] Fitty [Wienhold] was like stepping into cold water, but in the end, I did end up writing the whole album together with him. For the production, I was thinking about looking for somebody new and the first name that came up to my mind was Michael Wagener (ALICE COOPER, SKID ROW, WHITE LION). So I called Michael and said, “Michael, are you’re interested in producing the new U.D.O. album?” and he said, “Yes, of course I would love to do it,” and I said, “Okay, let’s do it now,” and then he said, “Sorry, but at the moment I am producing someone else.” And then he said, “Why aren’t you doing it on your own?” The results we got then became “Steelhammer”.

BigMusicGeek.com: In hindsight, what are your feelings in regards to your time as a member of ACCEPT? Do you harbor any negativity to towards the remaining original members? Is it possible there will be yet another full-scale reunion?

Udo: ACCEPT is a different story. We did a reunion in ’92 and did three albums together [“Objection Overruled“, “Death Row“, “Predator“]. For me, the first one was a real ACCEPT album. We did the next one with only with one guitarist and for me, the sound with ACCEPT was always with two guitarists, so there was already some problems coming up. The whole atmosphere was completely gone. We did a tour and then we said, “Okay, before we destroy the name ACCEPT, let’s split up again.” Then they asked me twice after fifteen years to do another reunion and I said, “Guys, I’m quite successful with U.D.O., and if I shut down U.D.O. again and join ACCEPT, we have to talk about a lot of things.” In the end, I said, “Okay, if I do this and we split up again, I cannot come up for a third time with U.D.O. I have to continue under the name ACCEPT.” And I said to [guitarist] Wolf [Hoffmann], “You were stealing the name in the ’80s. You get the rights on it without asking somebody, especially me.” And he said, “No, I cannot do this.” and I said, “Okay.” There was a lot of other points and then I said, “Okay, guys. Sorry, but I don’t want to do this. I will continue with U.D.O. I wish you all the best.” That was the whole thing with the reunion. They put out a very good album in 2010 [“Blood Of The Nations“], but then again, I can imagine that after fifteen years, they would have enough time to write a good album. I wish I had fifteen years time to write songs. I expected them to do a good album and “Blood Of The Nations” is a good album, but in my opinion, “Stalingrad” [2012] is not as good as “Blood Of The Nations“. The new singer [ex-TT QUICK frontman Mark Tornillo] is a really good singer, but I think he has problems when he sings all the old ACCEPT songs. They’ve had some good success, so we’ll have to see about the future. Everybody wins because they have both ACCEPT and U.D.O.

BigMusicGeek.com: Do you have an actual relationship with anyone from the group? Are you still on “speaking terms” with Wolf?

Udo: No. There is not talk anymore. I don’t want to start a war, but Wolf was saying a lot of bad things about me and I don’t understand why he did that. Then, later on when they would come up to people who didn’t know what they had said before, they changed completely. They’d say, “U.D.O. is great. Udo is such a nice guy.” so I said, “Never ever talk to me again.” I don’t care. I am happy and they seem to be happy, so what can say?

Read the entire interview at BigMusicGeek.com.