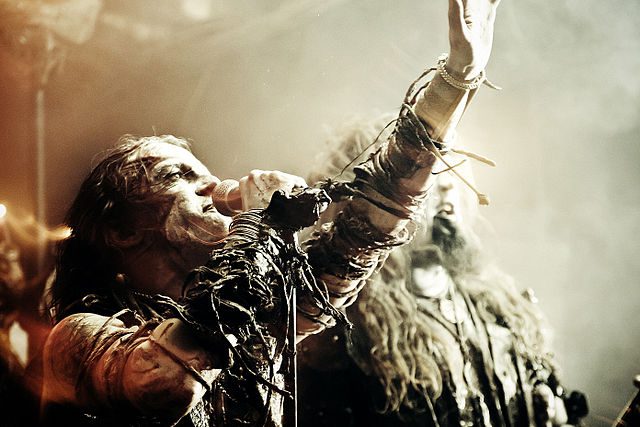 The Great Southern Brainfart recently conducted an interview with Erik Danielsson of Swedish black metallers WATAIN. A couple of excerpts from the chat follow below.

The Great Southern Brainfart: So I have to be honest. Aside from listening to VENOM as a kid, I was never much of a black metal fan, and then I gave you guys a listen, and I’m really intrigued with your songs and your performances.

Erik: That is really good to hear that you made that comparison. I wish I heard VENOM andWATAIN in the same sentence more often. VENOM is one of my all-time favorite bands, and I think if you have that sort of background, you might actually be able to relate to what we do as well. Musically, there might be a slight difference. VENOM are the originators of the black metal movement that we later became a part and we like carrying that torch onwards and uphold that legacy.

The Great Southern Brainfart: WATAIN seems to have more of that classic element than most of the other modern bands. Is that something that was intentional?

Erik: We never really sat down and discussed how WATAIN should sound. It’s pretty safe to say, though, that our own personal preferences, when it comes to black metal, have always been very traditional. VENOM are one of the most important bands ever to WATAIN and the same goes for bands like MERCYFUL FATE and even bands like EXCITER, RAZOR, andVOIVOD. We’ve always leaned towards bands like that in our own musical tastes when it comes to metal. I suppose our sound really comes from a mix of those bands and late-era black metal such as MAYHEM and DISSECTION and so on.

The Great Southern Brainfart: One of the things that intrigued me the most about Watain was the ritualistic approach to the live show using animal carcasses, lighting candles on a small alter and whatnot. What can you tell me about the live show and the background to this ritual?

Erik: If you play music of a diabolical nature, and the music that you perform is permeated by a sinister and infernal essence, of course, that will have to translate to the stage show as well and your appearance. It’s not a process that should be forced. It should come as a natural consequence of the music that you’re playing and the artistic work that you are doing. WithWATAIN, it was very much that way and it evolved into this thing that it is. When we started playing, we already had that kind of extreme view of how a black metal live show should be like. It should look like the music sounds. That’s how it all began. The longer that WATAINexisted, the more we realized that the magical side of this band, the spiritual side began to come through and it just began to transform into a ceremonial thing rather than just a rock concert, so to say. It evolved into an event where we communicate with the forces that gave birth to this band and that have always been a part of this band. It became a time where we could let these things just come to life and be at one with them. It’s an ever-ongoing evolution and the live shows are constantly progressing. They have become something more and more severe and intense and that’s a very good thing to me. It’s a very inspiring context to work with.

The Great Southern Brainfart: When WATAIN takes this ceremony on the road, especially when touring in the southern part of the U.S., sometimes there are limits as to what you can and can’t do on the stage. When that does happen, how much of an impact does that have on the purpose of your live performance? Does it make things harder for you to do?

Erik: Yes, of course it does, but being in a band like WATAIN is always quite a challenge. When you take something as inhuman as WATAIN into the world, then, of course, things can be a bit strange. We knew since day one that we would have to face a lot of opposition because of some of the things we wanted to do. I think we’re always pretty well prepared for that to happen. Of course, it’s annoying and it makes me want to punch the living shit out of anyone who stands in our way, but we always find a way around these things. There’s always a way for the devil to come through, no matter what. It cannot be stopped. It’s just a fact and it’s been that way since the dawn of man. The devil always wins and the devil always finds his way. I think that in general, all of that opposition and all of the people who prevent us from doing what we want to do just makes us stronger. It makes us feel more proud and stronger about what we’re doing. We like to fight against the extreme and we like to go against the current. We like to be the enemy and that just fuels the fire of WATAIN and I actually appreciate that. I like touring in places especially the South because we always feel that tension and how skeptical they are but in the end we just do what the fuck we do anyway. [laughs]

Read the entire interview at The Great Southern Brainfart.