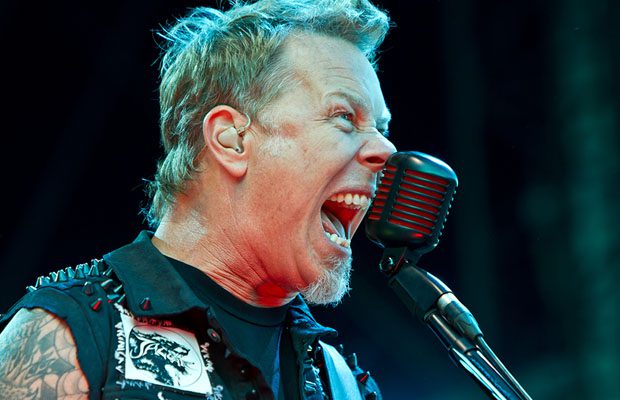 METALLICA frontman James Hetfield recently spoke to Gary Graff of Oakland Press about the progress of the songwriting sessions for the band’s follow-up to 2008’s “Death Magnetic”.

“Hopefully [we will return to the studio] soon,” Hetfield said. “I’m itchin’. We have tons of material to sift through. That takes a lot of time, because there’s a lot of great stuff. I know we only need a few songs, but there’s 800 riffs we’re going through. It’s kind of insane. We have sifted through a lot of the stuff and pulled the cream of the crop — it’s just sitting there waiting for us to take it to the next level.”

He added: “I know we do need to decompress after this, get this [‘Through The Never’] film thing out of our systems. It’s taken up a lot of time and a lot of effort. We go full-throttle into something and multitasking is not what we’re after. So the next record will hopefully start some time in the spring.”

Hetfield also weighed in on the box-office performance of “Metallica Through the Never”, which has grossed $2.724 million so far, having moved to standard theaters last weekend after opening September 27 on IMAX screens.

“I didn’t really have any huge expectations,” Hetfield explained. “I’m just excited to have the baby out of the womb and walking around now, finally, (after) two years at least with the process as it was — and having the idea for decades.

“As far as (box office) numbers coming back, management is certainly a little more focused on numbers and all of that and what it means. I don’t know much about the movie world. As an artist, I just like that the thing is out there. It’s exactly what we wanted, and we’re proud of it.”

Financed by the METALLICA members themselves at a budget of $18 million, “Metallica Through The Never” is the first new release via Picturehouse, the full-service independent film marketing and distribution company started in 2005, which reopened its doors with founder Bob Berney at the helm. The film’s surreal narrative winds its way through the concert footage, in which a roadie played by Dane DeHaan finds himself in an increasingly hostile urban environment while on a mission for the band.

The soundtrack, which features a number of METALLICA classics performed live in the movie, was released on September 24. The two-disc CD came out on METALLICA‘s own label, Blackened Recordings, also in digital and vinyl formats.