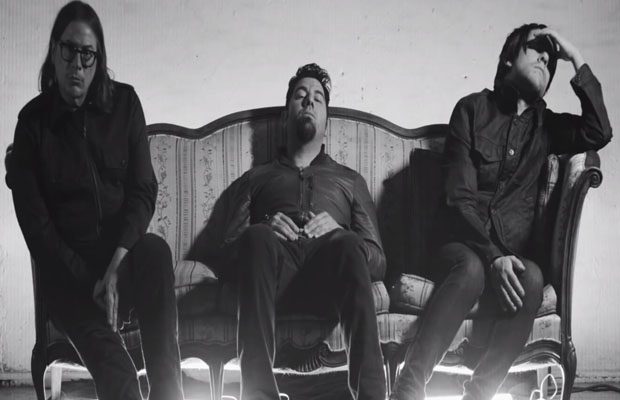 “Bitches Brew”, the new video from ††† (CROSSES) — DEFTONES frontman Chino Moreno‘s project with FAR guitarist Shaun Lopez — can be seen below. The song comes off ††† (CROSSES)’s self-titled full-length debut, which will be released on February 11, 2014 via Sumerian Records. The CD will include the songs from ††† (CROSSES)’s two previously released EPs — 2011’s “†” and 2012’s “††”, along with five new tracks.

“Visuals have been an important aspect of ††† since the beginning, so when making our first video, we wanted to make sure it held up,” Lopez tells Rolling Stone.

“When I first spoke to the director Raul Gonzo about some ideas for the video, I knew he’d be the creative partner we needed. I think the end result represents us and the music very well.”

The first single, “The Epilogue”, was released via iTunes on November 11.

In a 2011 interview with ChinaShop, Moreno stated about how ††† (CROSSES) came together, “I remember I mentioned to [Shaun] one day when we were hanging out, y’know, ‘We should make a record together.’ It just so happened that when I moved to L.A. I ended up living a few blocks away from him. I was down here working on recording some vocals with Shaun. We just clicked. We listened to a lot of the same music. We’ve always worked well together. With this project in particular, I met [guitarist] Chuck over at Shaun‘s house. Chuck was working on some of his solo stuff. I don’t know when they started working together, but they said they were working on a project together and asked if I was interested in contributing vocals. Whenever they were working, I’d just ride my bike over there. A couple different times, I was just like, ‘Let me try singing on this,’ and they were like, ‘OK, cool.’ I’d just go in and throw in a bunch of ideas. Pretty soon they got rid of the idea of getting a bunch of different singers together. We just started working on the record together.”

††† (CROSSES) made its live debut in January 2012 at The Glass House in Pomona, California.

Moreno previously described ††† (CROSSES)’s sound as “minimal and soothing and it’s sort of like the stuff I like listening to when I’m not screaming my head off.”